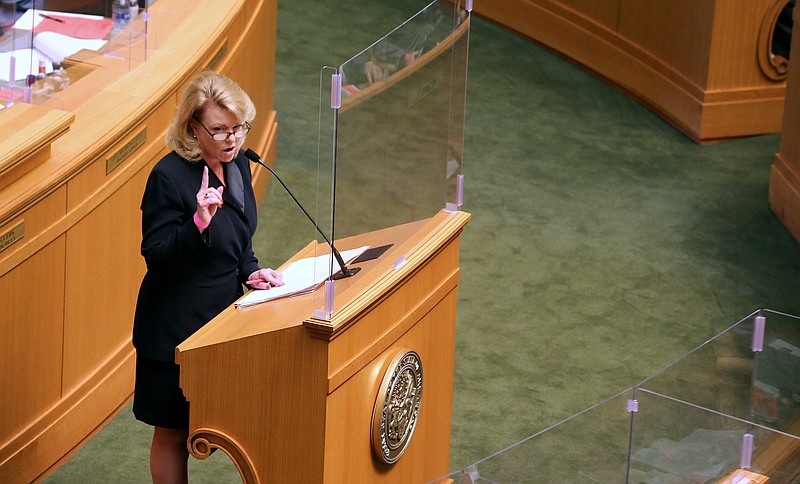 On Thursday, the Biden administration weighed in on a federal lawsuit in Arkansas challenging implementation of Act 626 of 2021 that would prohibit doctors from providing or referring transgender young people for medically necessary health care related to the medically recognized condition known as "gender dysphoria."

Gender dysphoria is defined by the Mayo Clinic in Rochester, Minn., as the feeling of discomfort or distress that might occur in people whose gender identity differs from their sex assigned at birth or sex-related physical characteristics.

In the filing, the U.S. Department of Justice came down solidly on the side of the plaintiffs in the case, Dylan Brandt, et al v. Leslie Rutlege et al, contending that the law as passed violates the Equal Protection Clause of the Fourteenth Amendment "by enacting legislation that wholesale prohibits healthcare providers from providing them with certain categories of medically necessary care, or referring them to another provider for such care."

The ACLU of Arkansas filed the lawsuit last month seeking to block the law, which it said would prohibit health care professionals from providing or referring transgender young people for medically necessary health care. The GOP-sponsored legislation prohibits the use of hormones and puberty-blocking drugs for children and gender-affirming surgical procedures, and also would prohibit insurance coverage for gender-affirmation treatment for youths and remove any requirement that insurance carriers provide any coverage for gender-affirmation procedures in general.

The legislation, introduced as House Bill 1570, sponsored by Rep. Robin Lundstrum, R-Elm Springs, was passed in the House and Senate in March before being vetoed by Gov. Asa Hutchinson on April 5. Less than 24 hours later, both chambers voted by overwhelming margins to override the governor's veto, making the law Act 626 of 2021.

The lawsuit was filed May 25 on behalf of four transgender teens and their families living in Arkansas and two physicians, Michele Hutchison and Kathryn Stambaugh. It asks that the court enter a judgment declaring that the law is unenforceable because of the constitutional violations it presents, and that preliminary and permanent injunctions be granted to block its implementation.

On Tuesday, the ACLU of Arkansas filed a motion for a preliminary injunction to prevent the law from taking effect while the lawsuit is working its way through the courts. The case has been assigned to U.S. District Judge James M. Moody Jr. As of Thursday, Moody had not ruled on the motion.

Alphonso David, president of the Human Rights Campaign national office, called the Biden Administration's filing "an important step to protect transgender young people from egregious laws passed by state legislatures to discriminate against transgender youth." David said the filing makes clear that the Justice Department considers such legislation to be harmful and illegal.

The Biden Administration's filing contended that Act 626 "denies transgender minors, and only transgender minors, the ability to receive medically necessary care based solely on their sex assigned at birth," which it said is a violation of the Equal Protection Clause. The Biden Administration said such discrimination can only be justified if the state can "show that it is substantially related to achieving an important governmental interest," and said that Arkansas cannot make that showing.

Asked what substantial governmental interest the state has in the matter, Attorney General Leslie Rutledge denied in an email through a spokesperson in her office that the law is discriminatory and called the Biden administration's filing "frivolous."

Rutledge contended that the filing only illustrated the weakness of the government's position, saying the position is "so weak that the Administration resorts to pages of personal attacks against Arkansas' elected representatives."

Although the brief attacks the legislation itself as unconstitutional, buttressing the administration's claim with citations of numerous legal cases throughout the country, the only references to state legislators outlined comments said in public meetings or social media posts denigrating gender-affirming care for minors.

Of those references, the administration said in its brief, "biases and moral disapproval articulated by the law and its sponsors are not justifiable reasons to legislate." In support of that position, it cited the 2003 case of Lawrence v. Texas in which two men were arrested and convicted for violating the state's prohibition of same-sex sexual conduct, which the U.S. Supreme Court overturned by a 6-3 decision in which Justice Anthony Kennedy, writing for the majority, said, "The Texas statute furthers no legitimate state interest which can justify its intrusion into the personal and private life of the individual."

Despite that and similar rulings, Rutledge said, "U.S. Supreme Court precedent makes clear, to prevail, the plaintiffs and the Biden Administration must demonstrate that Arkansas's law is irrational. They cannot meet that standard. It is not irrational to protect children from experimental procedures that have irreversible, physical consequences in the absence of any evidence whatsoever that those procedures have any benefit."

Rutledge did not address the question of what the state's compelling interest may be in the matter. Her contention that medical interventions related to transgender health care are "experimental" are rebutted in the brief, which referred to statements from numerous health care associations including the American Medical Association, American Academy of Family Physicians, American Academy of Pediatrics, American College of Obstetricians and Gynecologists, American College of Physicians, American Osteopathic Association, and the American Psychiatric Association in regard to state laws that "inappropriately interfere with the patient-physician relationship, unnecessarily regulate the evidence-based practice of medicine and, in some cases, even criminalize physicians who deliver safe, legal, and necessary medical care."

In conclusion, the brief contended that Act 626 would be unable to survive heightened scrutiny "because the state's articulated objectives are merely pretextual justifications lacking any scientific or factual basis" and that because the law prohibits "widely accepted treatment protocols," it would deny medically necessary care to transgender minors "solely based on their sex assigned at birth and their transgender status." It contended that the effect of the law would not protect the health and safety of transgender minors but would instead deny "the most vulnerable among them life-saving care."

Holly Dickson, executive director of the ACLU of Arkansas, hailed Thursday's filing by the Biden administration as affirmation of the ACLU's position in the matter.

"Today's filing from the Department of Justice sends a powerful message that affirms what we've said all along," Dickson said in an emailed statement, "transgender youth have rights and singling them out for discrimination is plainly unconstitutional as well as unconscionable. By trying to deny health care to trans youth because of who they are, the government is violating their rights as guaranteed by the Constitution and federal law. We will keep fighting as long as it takes so that Arkansas trans youth can keep accessing the medically necessary care they need."