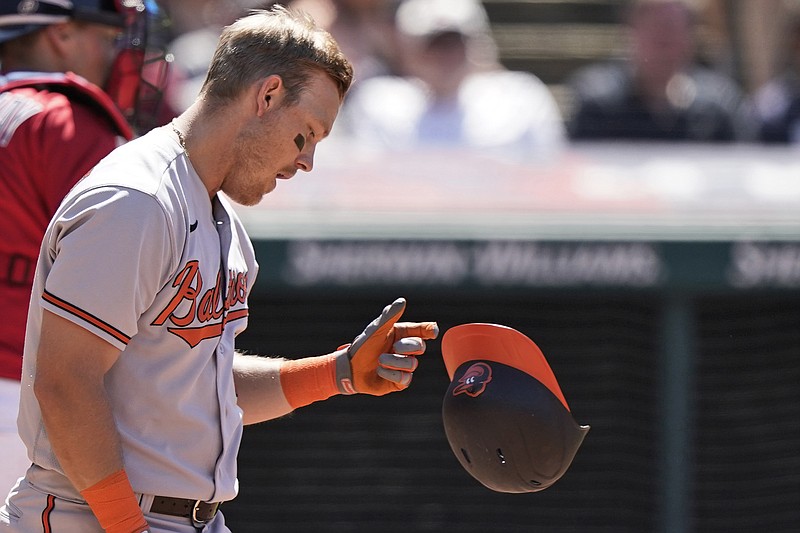 Baltimore Orioles' Pat Valaika drops his helmet after striking out in the eighth inning of a baseball game against the Cleveland Indians, Thursday, June 17, 2021, in Cleveland. (AP Photo/Tony Dejak)

SAN FRANCISCO -- Occasionally, the Arizona players glanced up at the Oracle Park scoreboard in center field. It told a most familiar, gloomy story.

The Diamondbacks made dubious history, setting a major-league record with their 23rd consecutive road loss in getting trounced by the San Francisco Giants 10-3 on Thursday.

"It's nothing we're proud of," Manager Torey Lovullo said. "It's been an extended period of time. It weighs on you. It's heavy."

The dejected D-backs trudged off the field and quietly made their way back to the visiting clubhouse after the final out, breaking a tie with the 1963 Mets and 1943 Philadelphia Athletics for road futility.

Arizona's lone hit through six innings was a single by pitcher Zac Gallen as the Diamondbacks fell behind 6-0.

"Obviously, the mood is unhappy," Gallen said. "Guys are definitely not satisfied with the way they're playing. I don't know anybody in their right mind who would be."

The MLB mark felt almost inevitable after Tuesday's collapse, which saw Arizona blow a 7-0 lead in a 9-8 loss to the Giants.

"I lay in bed at night thinking about different things," Lovullo said. "Sometimes I'm up until 3, 4 o'clock in the morning trying to put the pieces of this puzzle together in my own head. It's tough. It's very challenging."

The Diamondbacks' only consolation coming off this four-game sweep: They don't play again on the road until June 25 at San Diego, exactly two months to the day since their last road victory. Then again, Arizona isn't scheduled for a road game against a sub-.500 team until July 27 at Texas.

The Diamondbacks aren't the only team struggling away from home. Baltimore lost its 19th consecutive road game Thursday, also falling by the same 10-3 score at Cleveland.

Arizona's last road win came April 25 at Atlanta, when Madison Bumgarner pitched a seven-inning no-hitter to complete a doubleheader sweep. At that point, the Diamondbacks were a solid 9-8 away from Chase Field, with no signs of the trouble ahead.

Since then, the Diamondbacks have been swept on the road by the Marlins, Mets, Dodgers, Rockies, Brewers, Athletics and Giants.

The 1963 Mets and 1943 Athletics, incidentally, were both guided by Hall of Fame managers toward the end of their tenures. Casey Stengel turned 73 on the day the Mets ended their slide, while Connie Mack was 80 while Philadelphia skidded.

CUBS 2, METS 0 Kyle Hendricks flummoxed the Mets for six innings to win his career-best seventh consecutive start, Javier Baez hit a two-run home run in the first off Marcus Stroman and Chicago beat New York to avoid a four-game series sweep. Hendricks struck out seven and walked two, retiring his last eight batters after consecutive walks in the fourth. He improved to 4-0 against the Mets.

BRAVES 4, CARDINALS 0 Charlie Morton didn't allow a hit until the seventh inning and took a shutout into the eighth, lifting Atlanta over St. Louis. Morton gave up his first hit when Paul Goldschmidt lined a single to left-center with one out, but the right-hander followed by getting Nolan Arenado to pop up and struck out Tyler O'Neill. He allowed singles to Matt Carpenter and pinch-hitter Jose Rondon in the eighth and was pulled with two outs.

YANKEES 8, BLUE JAYS 4 Gio Urshela and Giancarlo Stanton each hit two-run home runs as New York defeated Toronto. The Blue Jays held a 4-2 lead entering the seventh before Stanton capped the inning with his 13th home run of the season. 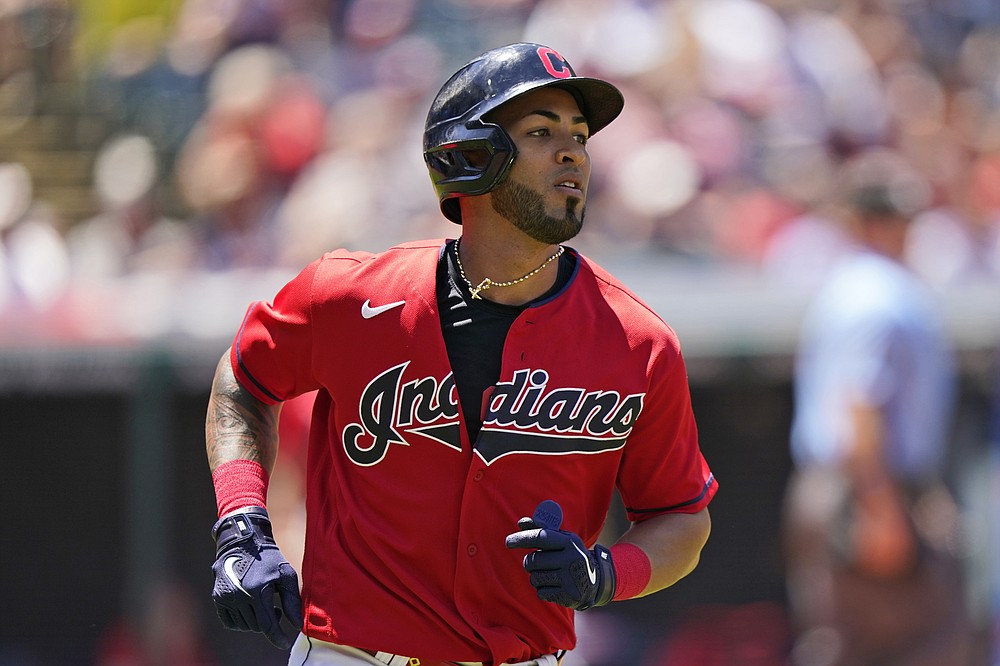 Cleveland Indians' Eddie Rosario runs the bases after hitting a solo home run in the third inning of a baseball game against the Baltimore Orioles, Thursday, June 17, 2021, in Cleveland. (AP Photo/Tony Dejak) 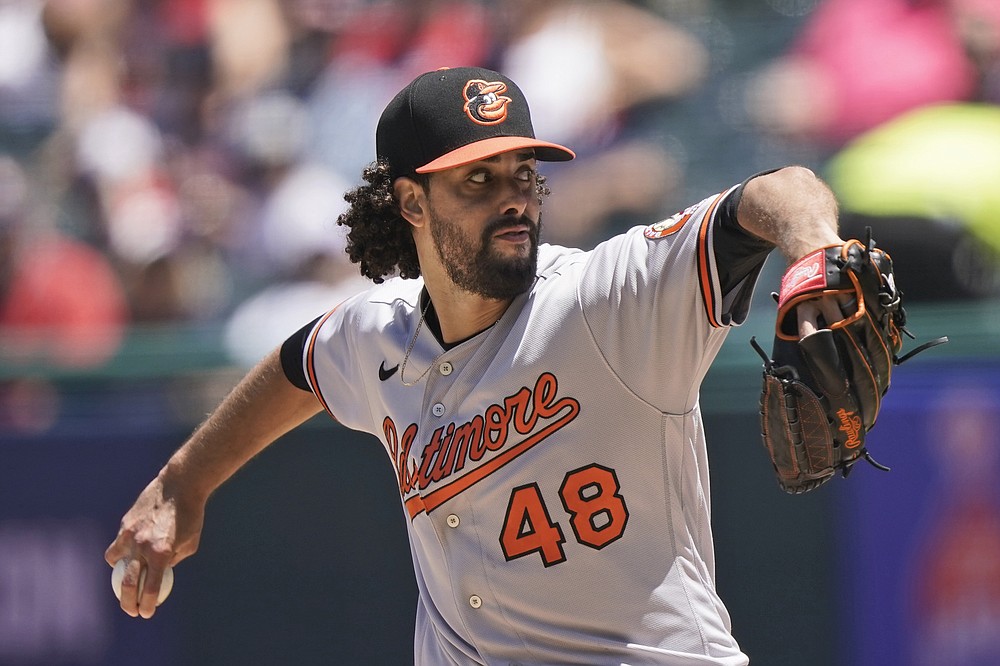 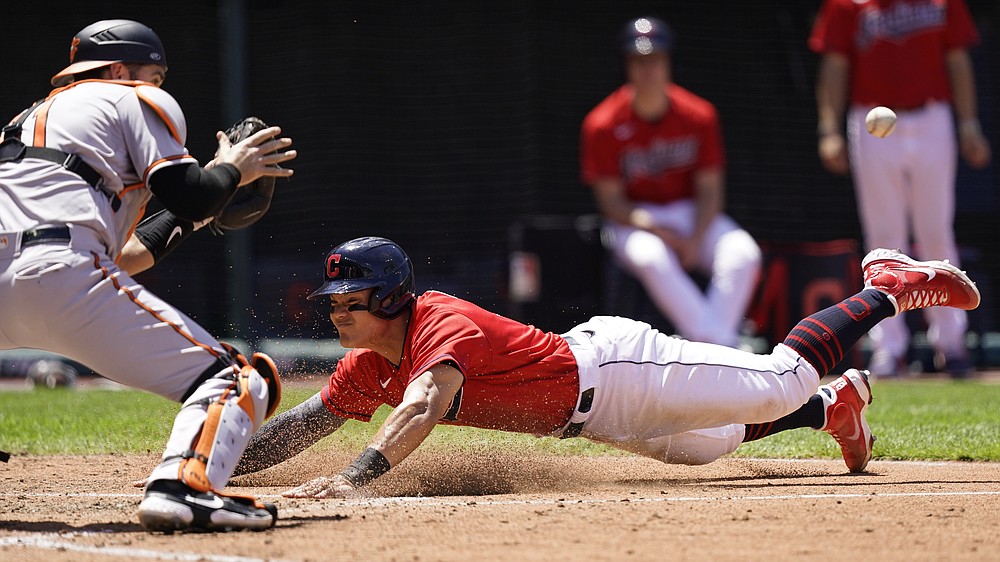 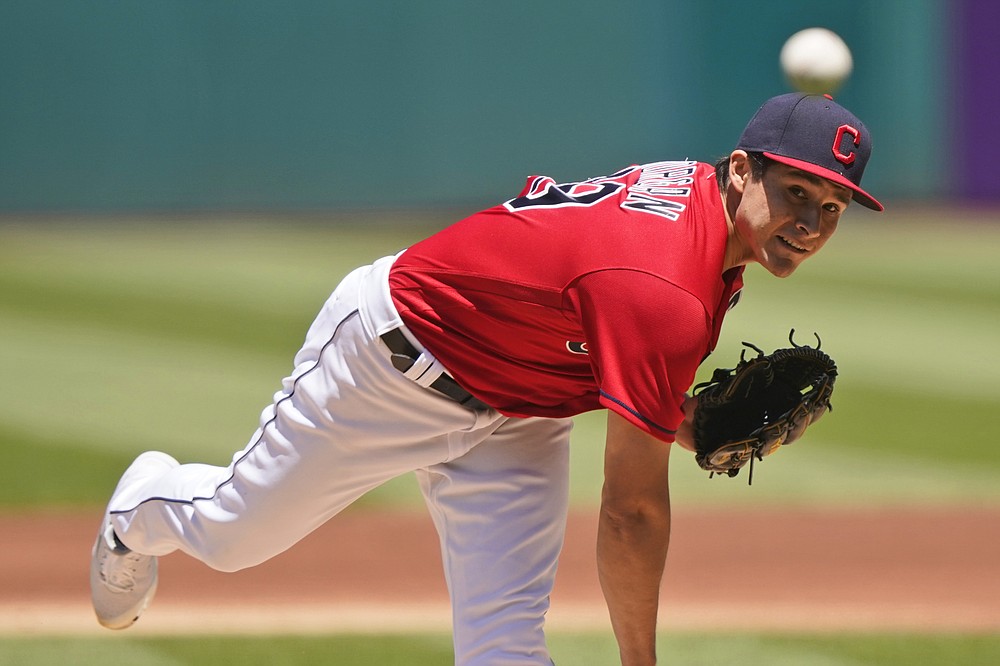