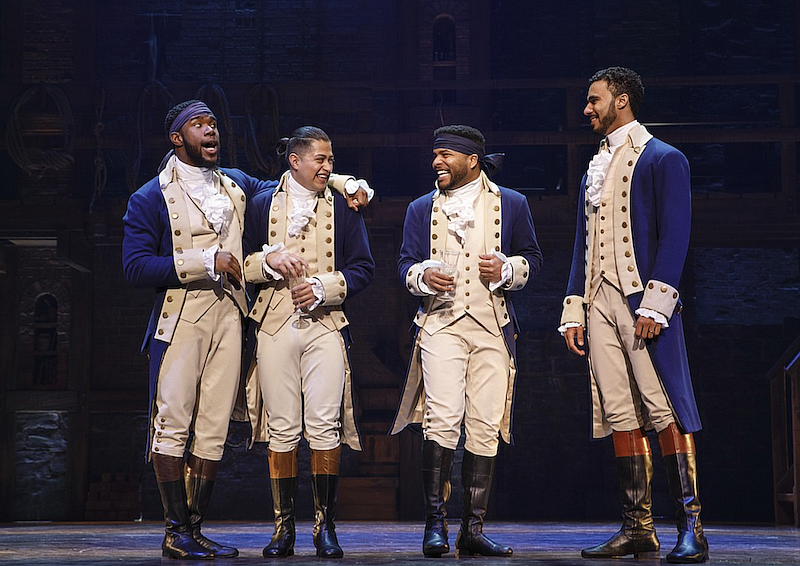 The "Hamilton" tour, held up by the covid-19 pandemic that wiped out Celebrity Attractions' 2020-21 season, will finally make it to Little Rock's Robinson Center Performance Hall Feb. 8-20. (Special to the Democrat-Gazette)

“Hamilton” was originally scheduled for the Robinson stage at the end of this month — June 29-July 11 — as the concluding show of Tulsa-based Celebrity Attractions’ 2020-21 Little Rock season.

The promoter is bringing in four other national Broadway tours, starting Oct. 29-31 with “The Simon & Garfunkel Story,” a sell-out hit from London’s West End.

The jukebox musical features a full live band and the folk-rock duo’s catalogue of hits, including “Mrs. Robinson,” “Cecilia,” “Bridge Over Troubled Water,” “Scarborough Fair,” “The Boxer,” “The Sound Of Silence” and “Homeward Bound.”

The remaining lineup consists of three musicals rescheduled from 2020-21:

• Nov. 13-14: “Anastasia” (music by Stephen Flaherty, lyrics by Lynn Ahrens, book by Terrence McNally, the team that brought you “Ragtime”), in which a brave young woman seeks to discover the mystery of her past in the 1920s while being pursued by a ruthless Soviet officer determined to silence her.

• Jan. 6-8: “Fiddler on the Roof” (music by Jerry Bock, lyrics by Sheldon Harnick, book by Joseph Stein, based on the stories of Sholom Aleichem), with a full orchestra and new staging by director Bartlett Sher and Israeli choreographer Hofesh Shechter.

• March 4-6: “Hairspray” (music by Marc Shaiman, lyrics by Scott Wittman and Shaiman, and a book by Mark O'Donnell and Thomas Meehan, based on John Waters's 1988 film).

Celebrity Attractions announced its 2020-21 season at a press conference March 12, 2020, that city business leaders and Mayor Frank Scott Jr. were supposed to attend. Scott arrived after the press conference and it was because he was putting together the city’s response to the budding coronavirus crisis, said Celebrity Attractions CEO Kristin Dotson.

“That was the day covid-19 became real for everyone,” she recalled.

Dotson said including the three main shows that the promoter had included on the previous season was a priority in assembling the next one.

“We tried to protect as much of that season that we had announced,” she said.

Putting together the “jigsaw puzzle” that is a season schedule is “challenging … even under normal circumstances,” dependent on whether the venue is available at the time it fits a show’s touring schedule.

“We were able to preserve, for the most part, the season that had been announced.” One show — by Blue Man Group — couldn’t be rescheduled for 2021-22 and will move to the 2022-23 season, Dotson explained.