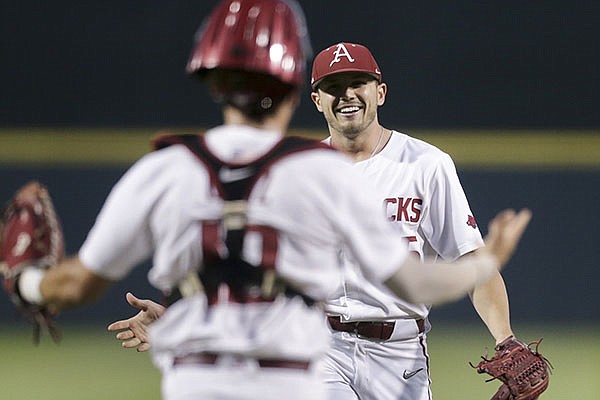 Arkansas pitcher Kevin Kopps (facing) is greeted by catcher Casey Opitz after the Razorbacks recorded the final out of an NCAA regional game against Nebraska on Monday, June 7, 2021, in Fayetteville.

The Razorbacks’ ace reliever was named the winner of the 34th Dick Howser Trophy as national player of the year. The award, which is voted on by the National Collegiate Baseball Writers Association, went to a relief pitcher for the first time.

The NCBWA also presented Kopps with its 16th Stopper of the Year Award as college baseball’s best relief pitcher.

Kopps carved through opposing lineups with a devastating cutter, but he credited his success as much to a more healthy lifestyle and improving his confidence in himself.

"I started working on that a lot this summer, just like starting to appreciate who I am versus looking at things I didn’t like about myself," Kopps said.

The Razorbacks were 28-5 in games during which Kopps pitched. Arkansas finished the season with a 50-13 record and won SEC regular-season and tournament championships.

"We just saw after a few outings that we could give Kevin the ball and this game might be over," Arkansas coach Dave Van Horn said. "I can’t really say which game that was, but we knew we had something special.

"It was just a different feeling with Kevin on the mound."

Van Horn said he could see something different in Kopps last fall. Kopps struggled with an 8.18 ERA during the shortened 2020 season, but was dominating hitters during intrasquad scrimmages.

"Standing near a dugout during scrimmages and hearing hitters come back kind of mumbling to themselves, saying things like, ‘Man, I can’t stand hitting off Kevin,'" Van Horn said. "We kind of knew we had something going there."

Kopps entered a game in relief 32 times. His only start lasted eight-plus innings in the Razorbacks’ season finale, a 3-2 loss to North Carolina State in the decisive game of the NCAA Fayetteville Super Regional.

Kopps allowed three runs in the start — the only runs he allowed in 23 1/3 innings of NCAA postseason play.

Kopps is the second Arkansas player to win the Howser Trophy and the first to win Stopper of the Year.

Former Razorbacks outfielder Andrew Benintendi swept national player of the year honors in 2015 when he won the Howser Trophy and the Golden Spikes Award. Kopps is a semifinalist for the Golden Spikes, which will be presented by USA Baseball in July.

"I feel like it’s just a testament to the player development and the program we have going," Kopps told MLB Network.

He has been voted first-team All-America by NCBWA, Baseball America and Collegiate Baseball Newspaper.

"What sticks out to me the most is before the season in one of my bullpens, (pitching coach Matt Hobbs) was showing me one of my overlays, and he told me that I was going to be an All-American," Kopps said. "His belief in me and the confidence I got from that really helped me throughout the season."

Tennessee coach Tony Vitello won the NCBWA’s Mike Martin Award as national coach of the year after leading the Volunteers to their first College World Series appearance since 2005. Vitello was an assistant at Arkansas for four seasons from 2014-17 and helped recruit Kopps.

Stopper of the Year winners