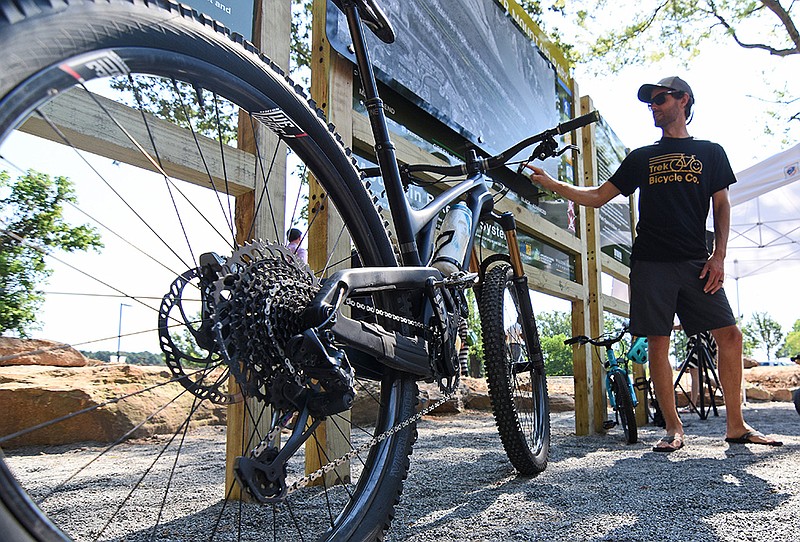 Mitchell Allen of Little Rock checks out the map of the new bike trail system at River Mountain Park during Little Rock’s and the Arkansas Parks and Recreation Foundation’s dedication of the system Thursday. (Arkansas Democrat-Gazette/Staci Vandagriff)

Little Rock officials staged a ribbon-cutting Thursday morning for a new bicycle trail system at River Mountain Park, a project backed by the philanthropic foundation of the heirs to the Walmart fortune.

The 10-mile trail system is the first professionally built bike trail within the city's park system.

Situated along the Little Maumelle and Arkansas rivers, the new trail system features routes rated green, blue and black as well as an advanced downhill line that descends 252 feet in elevation, according to a news release.

Construction began in January, and the trail is now open to the public.

According to the news release, the machine-cut trail system was constructed by Rock Solid Trail Contracting.

Additional work to create a gateway trail and a kids bicycle-skill area geared toward beginners, both at nearby Two Rivers Park, is expected to be complete by the end of this month.

He suggested Little Rock is "the next city" others are talking about in terms of a destination. Scott credited that to the city's vision on "parks and trails and overall quality-of-life and place."

"The great thing about parks and trails [is] it connects everyone irrespective of their sex, their gender, their race or their culture, because when we get outside, we get active and we are able to build relationships, build trust and to execute together," Scott said.

He also tied the trail opening to economics, saying, "Parks and trails are the new economic development model."

Gretchen Hall, president and chief executive officer of the Little Rock Convention and Visitors Bureau, told those at the ribbon-cutting that although Central Arkansas has long been known for road cycling and the Arkansas River Trail, with the addition of the River Mountain Park trail the region now has seven mountain-biking trail systems of varying difficulty.

"With direct access now from the Arkansas River Trail, these trails will be incredibly convenient for our guests that stay in hotels downtown and that want to traverse out here on their bicycles to the River Mountain Park," Hall said.

Peck, who lives about a mile away, said, "We have 63 parks in Little Rock and this is my favorite, not just because it's in my backyard. This is going to be incredible."

Peck joined with five of her colleagues on the Board of Directors on Tuesday during a successful vote to call a Sept. 14 special election for Scott's proposed 1 percentage-point sales-tax increase, a spending package dubbed "Rebuild the Rock." The tax is expected to generate $530 million over 10 years.

At the ribbon-cutting, Peck urged support of the tax increase.

A follow-up "party in the park" event at River Mountain Park is scheduled for 10 a.m. to 2 p.m. Saturday. 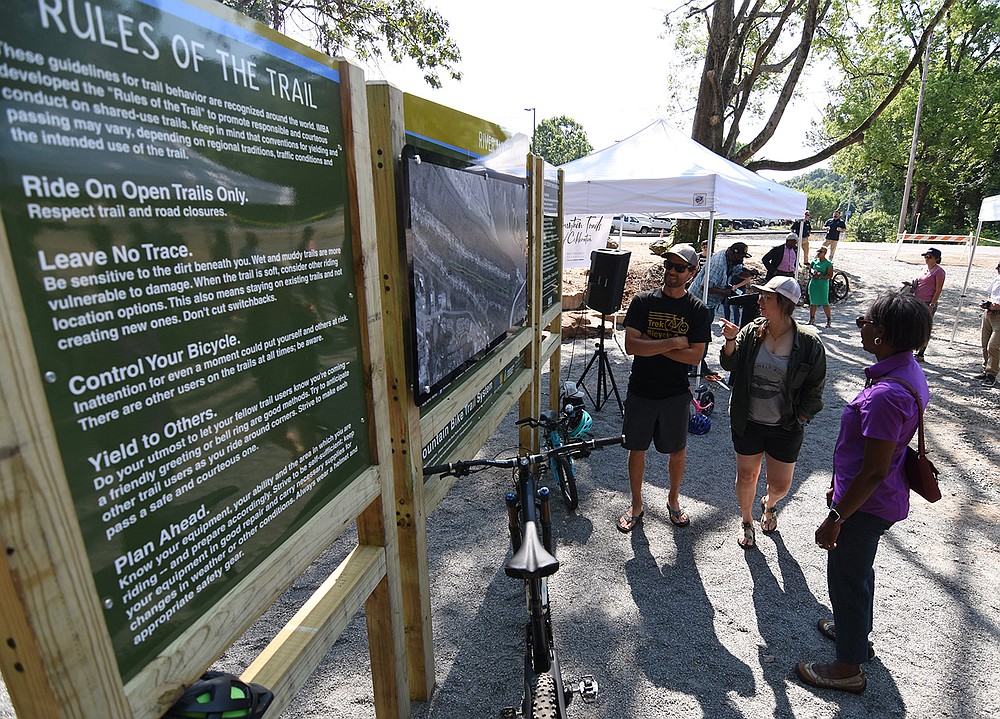 Mitchell Allen (from left), Leah Beck, both of Little Rock, and Kim Sanders, bicycle and pedestrian coordinator for the Arkansas Department of Transportation, look at the map of the new bike trail system at River Mountain Park during Little Rock’s and the Arkansas Parks and Recreation Foundation’s dedication event Thursday. (Arkansas Democrat-Gazette/Staci Vandagriff)