My name is "Luca," I live on ocean floor 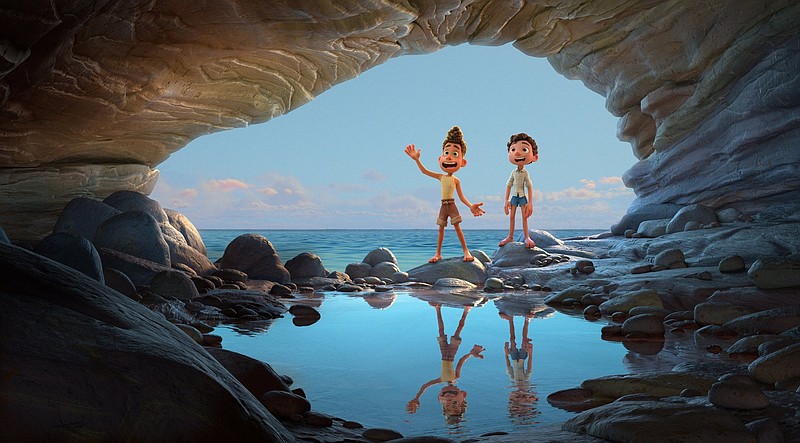 They sleep with the fishes: Alberto (voiced by Jack Dylan Grazer) and Luca (Jacob Tremblay) enjoy a summer on the Italian Riviera in Pixar’s “Luca,” now streaming on Disney +.

Pixar has a reputation for making quality animated films. The studio has won a number of Oscars (some by default), and it's rare the company makes a bad movie. Then again, "Cars 2" exists.

Fortunately, "Luca" is several very broad strokes ahead of the aforementioned sequel.

Originally slated to hit theaters, Disney decided to move "Luca" straight to Disney+, which was a strange decision seeing as it let "Raya and the Last Dragon" hit the big screen earlier this year. This is the second Pixar film to go straight to Disney+, with "Soul" bypassing theaters in December.

Business Insider even reported some Pixar staff is growing frustrated its hard work isn't being sent to the big screen. And after two movies, it makes sense for these artists to be worried. They don't want the future of Pixar to be limited to streaming, especially as movie theaters continue to open up as covid-19 infection rates decline.

"Luca" is definitely a film that deserves to be seen on the silver screen. It's adorable and airy, just like the picturesque coastal village where the movie takes place. Set in a small Italian village during the 1950s, the story follows a teenage sea monster named Luca (Jacob Tremblay) as he discovers his love for the surface world.

Although shy and introverted, Luca is bolstered by his confidant and best friend Alberto (Jack Dylan Grazer). And unlike Ariel, he doesn't need to make a bargain with a sea witch to grow legs and walk on dry land. He can already do that on his own.

It's a curious feat of evolution in this movie, but all the sea monsters, merfolk, or whatever you want to call them can just waltz up onto dry land, breathe fine, and even take on a human form, as long as they stay dry.

Luca's overly harsh parents eventually discover he's visiting the surface and threaten to send him to live with his uncle in the deep part of the sea where there is no light. This prompts him to run away with Alberto and live in the human village of Portorosso.

Together, they dream of owning a Vespa and touring the world. So to make that happen, they team up with a girl named Giulia (Emma Berman) to enter a triathlon and win enough prize money to buy the scooter of their dreams.

The danger for Luca and Alberto is a prejudice among the Italian people that sea monsters are dangerous. Everyone in town is sworn to kill them on sight, so they have to avoid water at all costs.

"Luca" reads like a love letter to younger teens going on adventures during the summer when the world and their dreams appear limitless. It's got the energy of "Stranger Things" minus the interdimensional monsters. Or maybe "The Little Rascals" is a better comparison.

The simple idea of three kids training to win a race for prize money isn't anything new, but Pixar adding the twist of two characters being sea monsters hiding their true identity made for a unique story.

And speaking of hiding identities, there's definitely some LGBTQ+ undertones in "Luca," with the main characters having to hide who they truly are for fear of physical harm. And although Director Enrico Casarosa denies it, some have questioned if Luca and Alberto are actually gay, pointing to similarities between this film and "Call Me by Your Name."

"Luca" is full of great humor, like an Italian goodbye (or what folks in Arkansas would call a southern goodbye) where Luca keeps telling Alberto he needs to leave but ends up staying for hours as they work on assembling a makeshift scooter from assorted junk.

One of the best characters is Giulia's father, Massimo (Marco Barricelli). He's this strong and scary fisherman who quickly takes a liking to Alberto and Luca but is also ready to kill sea monsters at the drop of a hat. The tension between his suspicion and Luca and Alberto's secret is hilarious. He also has a cat named Machiavelli who knows Luca is a sea monster and initially hates him for it.

"Luca" is filled with lovable characters, but the antagonist, a rich bully named Ercole Visconti (Saverio Raimondo) is so easy to hate. He's like Angelica from Rugrats or Draco Malfoy from "Harry Potter," in that, he's written so mean that audiences won't be able to avoid hating him. Ercole is the perfect rival.

Pixar's artists designed a colorful and easygoing world for "Luca." The backgrounds from the village to the Italian coastline are all spectacular, while the character designs for everyone on the screen are simple, yet charming.

The way Luca and Alberto transform so seamlessly from human to sea monster is rendered beautifully.

If you consider the bright colors and cheery, yet heartfelt, coming-of-age story, "Luca" is probably the closest Pixar has gotten to making a Studio Ghibli movie.

There's quite a bit of Miyazaki-like energy throughout "Luca," so the movie has a vibe similar to "Kiki's Delivery Service" or "From Up on Poppy Hill." That might be what makes "Luca" feel like a refreshing ocean breeze that hits during a warm summer afternoon.

RACE TO THE FINISH

The final race is tense and dramatic, yet highlights the rich friendship between Luca and Alberto. Pixar also swings for a rather gutsy ending that seems to punch above the weight class one would expect from such a charming little movie.

Included in the ending credits are cute little sketches that'll actually give audiences a reason to let all that text slide upward on the television screen. They reveal a few details about what happens to Luca after the story's conclusion. Pixar should release a "Luca" comic book with the exact same art style as the end credits pictures.

One bit of text in the credits that might make audiences smile is "Produced in our slippers around the Bay Area," a note to the pandemic which undoubtedly forced many animators to work from home. It's a cheerful message from Pixar's staff, who worked tirelessly in the face of adversity to bring this delightful story to millions of viewers.

"Luca" does have a few small problems (most films do). The biggest one is Luca's constant daydreaming scenes, which really aren't funny or entertaining. Since "Luca" is barely 90-minutes long (a perfect length), the constant daydreaming just feels like padding. They go over about as well as Olaf's daydreams in "Frozen."

Luca's mother and father also take a while to warm up to. The couple really only get funny when they start chucking kids into the water trying to find their son.

Then there's a superfluous after-credits scene with Luca's uncle Ugo (Sacha Baron Cohen) chattering mindlessly in the dark part of the sea. The character isn't all that likable, so it's a mystery why he got an after-credits scene.

"Luca" will definitely be a contender for best animated feature at the Oscars. It's cute. It's sweet. It's full of heart.

The film would have been great to see on the big screen, but as of today anyone with a Disney+ subscription can watch it. Disney isn't even charging its ridiculous "premiere access" fee like it did for "Mulan" and "Raya and the Last Dragon."

So load it up, and get ready for fun. At $8 for a month's subscription, "Luca" is already cheaper than an average movie theater ticket.

Print Headline: My name is "Luca," I live on ocean floor