Omaha no friend to long-ball hitters 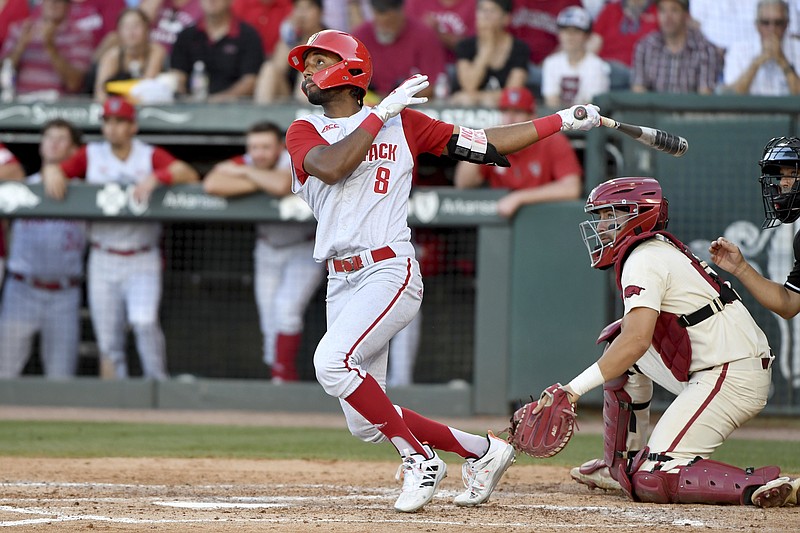 FILE - North Carolina State's Jose Torres (8) watches the ball after connecting for a home run against Arkansas in the ninth inning during an NCAA college baseball super regional game in Fayetteville, Ark., in this Sunday, June 13, 2021, file photo. Home runs — lots and lots of them — have defined the NCAA baseball tournament so far. A total of 381 have been hit in 123 games, the highest total through super regionals since at least 2005.(AP Photo/Michael Woods, File)

OMAHA, Neb. -- Home runs -- lots and lots of them -- have defined the NCAA Tournament so far.

A total of 381 have been hit in 123 games, the highest total through super regionals since at least 2005.

History suggests it is unlikely home runs will come at the same rate when the stage moves to TD Ameritrade Park for the College World Series beginning Saturday.

When the ballpark opened in 2011, it quickly earned a reputation for being the place where home runs go to die. While the number of CWS home runs has increased since the NCAA went to the less air-resistant, flat-seam ball, teams who are most successful find gaps in the expansive outfield for extra-base hits and advancing runners. And, of course, strong pitching and defense help.

After watching Tennessee and LSU combine for 10 home runs in the game's first 17 hits in a super regional loss to the Volunteers on Sunday, retiring Tigers Coach Paul Mainieri said of the CWS: "There might not be 10 home runs hit the entire tournament up there."

Home runs have been up all season. The rate of 0.87 per team per game through May 30 already was on track to be the highest since 2010. That figure is 1.55 in tournament games.

Teams combined for five or more home runs in 33 regional and super regional games, according to Associated Press research. The high was 11 in a Mississippi-Southern Mississippi regional game.

There were 38 instances of a player hitting multiple home runs in a game, and there were 13 grand slams.

No team enters the CWS on a bigger home run surge than Tennessee, which hit 16 in five tournament games. The Volunteers have homered at least once in 26 of their past 30 games, including 15 with multiple home runs and seven with at least four.

How will that home run-heavy offense carry over to Omaha?

"The easy answer would be as much as they've leaned on the home run down the stretch, it has potential for them to not be nearly as effective because it's so much more difficult to get the ball out of TD Ameritrade than most ballparks," said ESPN analyst Chris Burke, a three-time All-American for Tennessee from 1999-2001. "However, I do think the ball is carrying much better this year, and we've seen in the last few years in Omaha that while it's certainly not an easy place to get the ball out of, it's traveling out of that ballpark much more regularly since they switched to the current ball.

"I would expect the home run to still very much be in play in Omaha this year, but I think Tennessee is going to have to find some other ways to score."

TD Ameritrade's dimensions are 335 feet down the lines, 375 to the alleys and 408 to center. The cavernous downtown stadium sits on low ground a few blocks from the Missouri River, and ball flight is suppressed because games this time of year typically are played in high humidity and batters often hit into a south wind.

Coach Elliott Avent brought North Carolina State to the CWS in 2013, the first of two consecutive years when only three balls left the park. This week, he recalled watching his star player, Trea Turner, raise a fist in premature celebration after he drove a ball deep to left late in a game against UCLA. What he thought was a three-run home run turned out to be just a long out.

"I jumped out of the dugout, which I never do, and that ball didn't get out and so we lost to UCLA," Avent said. "I remember it's tough to get the ball out of there."

Avent said his team, which plays Stanford in the CWS opener after hitting 13 home runs in six tournament games, can't depend on the long ball in Omaha.

"You have to be a team that can score different ways," he said. "We have team speed, we can bunt, we can drive the ball out of the ballpark. But it's about singles and hitting gaps as much as anything." 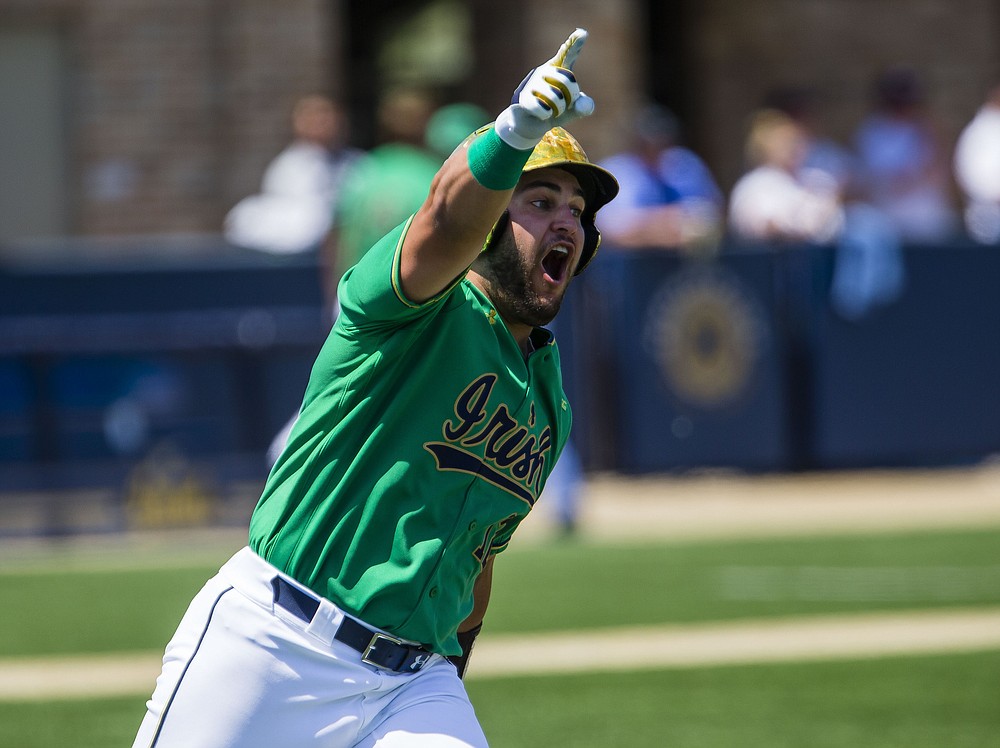 FILE - Notre Dame's Niko Kavadas (12) celebrates a home run against Central Michigan during an NCAA tournament college baseball game in South Bend, Ind., in this Friday, June 4, 2021, file photo. Home runs — lots and lots of them — have defined the NCAA baseball tournament so far. A total of 381 have been hit in 123 games, the highest total through super regionals since at least 2005. (Michael Caterina/South Bend Tribune via AP, File)