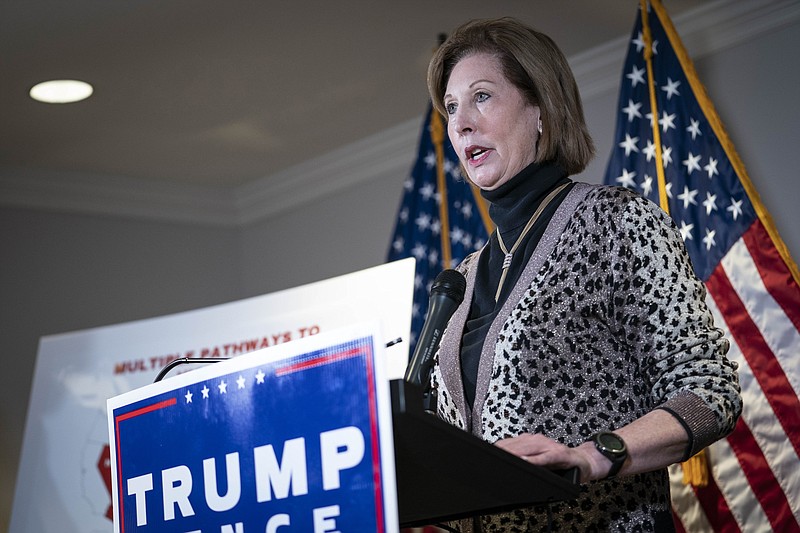 Attorney Sidney Powell speaks during the Nov. 19 news conference in which she asserted a conspiracy theory that a secret plot had altered potentially millions of ballots and stolen the election from President Trump. (Sarah Silbiger/The Washington Post)

A voting machine company that is suing Powell for defamation alleges that she siphons money from the charity to pay for her own legal defense.

“When asking people in Florida for donations and you don’t follow the law and if you misrepresent and deceive what you are doing, we will hold you accountable, no matter who you are,” said Fried, Florida’s only statewide elected Democrat. She is seeking her party’s nomination to challenge Republican Gov. Ron DeSantis, a close Trump ally, in next year’s election.

The two have spent the last several months openly showing their disdain for each other. Fried has called DeSantis an authoritarian who is sowing seeds for a 2024 presidential run, while DeSantis has called Fried a do-nothing who spends her time on social media seeking campaign donors in California and New York.

Fried and Rick Kimsey, her director of consumer services, said Defending the Republic has not registered with their agency as required by state law or filed financial disclosures that show how revenue is spent, even though its website told donors it had done both. The group could be fined $15,000 and receive a cease and desist order if it fails to comply within three weeks.

Fried and Kimsey said when their office contacted Defending the Republic after receiving a complaint about the website, its officials claimed it must be run by another similarly named group. But Fried and Kimsey said the investigation showed the domain name is owned by Powell. She is best known for saying in November that a lawsuit she filed would release the Kraken, a mythical sea creature, that would destroy Biden’s claim on the White House. It went nowhere.

Fried denied that her action is politically motivated, but implied that a Republican agriculture commissioner might have ignored Defending the Republic’s actions.

“If I had a different party affiliation, I may have turned a blind eye,” she said.

DeSantis’ office did not immediately respond Friday to a call and email seeking comment. As Fried is elected independently, DeSantis has no control over her actions.

Powell did not return a phone message left at her Dallas law office or respond to an email. Defending the Republic did not respond to a message sent through its website.

Trump and his allies filed more than 50 lawsuits in multiple states over the election and lost at every turn. Powell and Rudy Giuliani were among the lawyers behind the cases claiming a conspiracy by Democrats, despite Republican state leaders, and Trump’s own attorney general and other administration officials, publicly stating there was no major election fraud. Powell appeared with Giuliani at a press conference and made multiple media appearances.

But after Powell threatened to “blow up” Georgia with a “biblical” court filing, the Trump legal team distanced itself from her, saying she was not working on their behalf but she continues to be one of his most vociferous supporters.

She is being sued by Dominion Voting Systems after she alleged it helped rig the election for Biden by manufacturing machines that could flip votes from Trump to Biden.

The Denver-based company claims Powell has raided Defending the Republic’s coffers to pay for personal legal expenses, citing her own remarks from a radio interview.