Democrat-Gazette readers share important lessons they learned from their dads 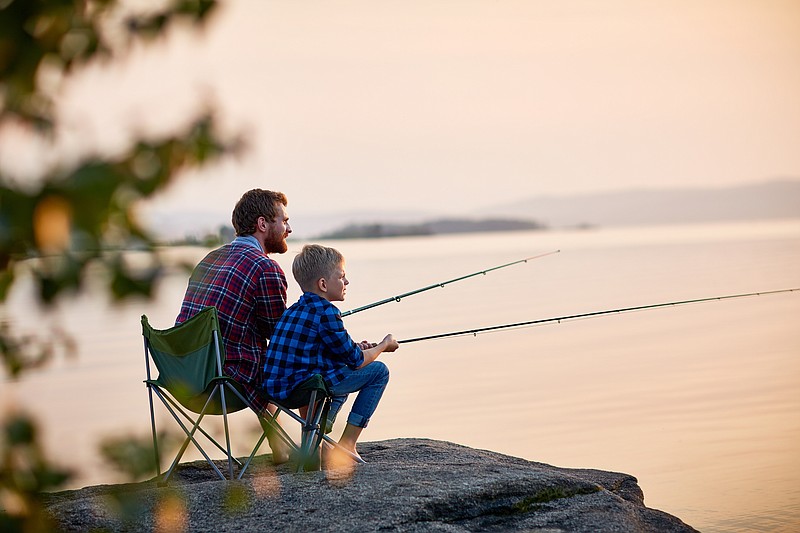 In this file photo, a child fishes with their dad. (iStock.com)

In honor of Father's Day this Sunday, we asked our readers "What is the most important lesson you learned from your father or father figure?"

Below are some of the thoughts readers shared with us. Responses have been edited for grammar and clarity.

"My father was 64 years old when he had me. This was a blessing because we spent a lot of time together. He taught me how to be a great father and how important it is to give your kids time. He instilled in me the most valuable asset I have is time, and to give that to my kids. I reminisce about my father often during the time I spend with my kids. He has been gone for close to 20 years, but each and every day I think of him when I interact with my kids, because I try to be the exact replica [of how] he was as a father to me. I dearly miss him but his spirit lives on, and I am the dad I am today because of lessons I learned from him."

"You’re only as good as your word. If you say you’ll do it, do it to the very best of your ability."

"Life is temporary. My dad died as the result of an accident when I was 8."

"My father's most meaningful lesson would be to never go to bed angry! He would say this often to me especially when we'd have an argument or be upset with each other. He lost his father when he was a teenager due to a train wreck and never fully recovered from that. When I was much younger, after a disagreement he would insist on settling it right then, or if not, he would come up to my room before bedtime and sit to talk about it. As I got older, I would find myself so frustrated by this because I was angry and didn't want to not be angry at that moment. It was difficult at times to switch it off when he wanted me to. Now I'm forever grateful for this and I too never go to bed angry with those I love. My father passed away on Good Friday April 2, 2021 and things are so different in my family. He was 90 years old when he died while living at home in the same house with his wife of 68 years. They moved into their current home in 1974 and have lived a life that many people don't get to live. I miss him every second of every minute of every hour throughout the day!"

"Take people the way they are, not the way YOU want them to be."

"The importance of marriage vows, specifically in sickness and in health. When mom contracted a disease similar to Lou Gehrig’s disease, dad spent the last five years of her life dedicated to making her feel special. When she would get up in the morning, dad would create a “receiving line” and announce “All hail the queen," and whoever was there would greet her good morning individually. When he would wheel her to bed at night, he would repeat the announcement, and we would line up to wish her goodnight. We saw a tough oil field worker transform into a wonderful caretaker dedicated to her until she passed. He set the example of what a dedicated couple does for each other."

"He showed up to every game, every event I had. He went to work everyday and came to pick me up from school, wash dishes, clothes and then he let me be. Just being at home and creating this routine gave me such security that I always felt safe and loved. He showed up!"

"My dad taught me to give back to the community I live in. He served on numerous boards, coached every sport, and was always a huge advocate for Jacksonville. He showed me that ONE person can make a BIG difference."

"My dad has cerebral palsy and has taught me about resilience and hope. The most valuable lesson though was one he taught me in a matter-of-fact way. I was 14 studying the Holocaust. I talked to him about it and he said: 'You realize if I had been born in Germany instead of the US (in 1939) I likely would have been killed.' I stood stunned, taking in the reality of privilege of birth country and a personal connection to that evil. That day I began a lifelong advocacy for the disabled and fight for a culture the values life. My dad was, and remains, my hero."

"If you put your cup down while out, get another one!"

"If you always tell the truth, you'll never have to remember lies."

"My father taught me to value education. He joined the Marines at age 17 and then switched to the Army after he got married. He started taking night classes at the University of Maryland overseas while he was active duty. He continued these stateside. Seventeen years later, he completed his degree in Criminal Justice with an art minor from UALR at the age of 51. He was the chief of the forensic photography section of the Arkansas State Crime Lab at the time of his graduation. We were in college during the same time period for a while, but I would not take classes with him, as he was known to set the curve! He never gave up on getting that degree and always put our education first. When I changed majors or became interested in pursuing something else at school, he was right there with support and encouragement. Because of him, I went back to school for my degree in art after having a successful career as a social worker. I was around the same age of 50 years old when I graduated from the same program in which he was enrolled, with some of the same instructors cheering me on. Without his example, I would have thought I was too old and too ridiculous to go back for another bachelor’s degree doing what I love. His is a legacy of love, lifelong learning, commitment, and persistence."

"He taught me the value of presence in children's lives. My father was short in stature and he had a flawed past. But he was fearless and he stood for his Christian beliefs as long as I knew him. But the biggest lesson was just that he was always there, which is what a father should be. He didn't have all the answers and he wasn't hugging and doting, And he didn't throw money and gifts around. But when I went to bed, he was there. When I awoke, he was there. When I failed or won, he was always there for me, and that is all a kid really needs. That is also the best lesson for a young father to learn, presence over presents."