Requirement for some sectors aims to boost immunizations by The Associated Press | June 18, 2021 at 4:02 a.m. 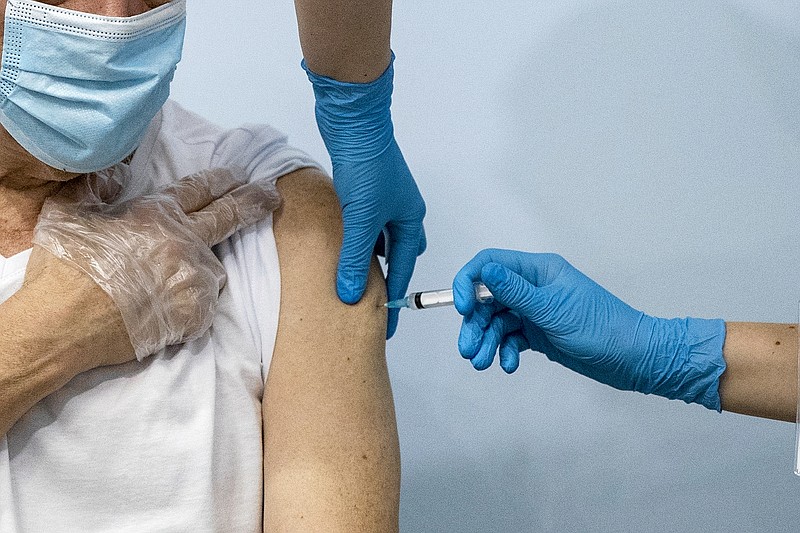 FILE - In this Jan. 20, 2021, file photo, a Russian medical worker, right, administers a shot of Russia's Sputnik V coronavirus vaccine to a patient in a vaccination center in Moscow, Russia. Authorities in four Russian regions this week made COVID-19 vaccinations mandatory for those working in certain sectors of the economy in a bid to boost Russia’s slow immunization rates as coronavirus infections continue to soar. Moscow was the first to announce the measure on Wednesday, June 16, 2021 and the surrounding Moscow region, the Siberian region of Kemerovo and the far eastern Sakhalin promptly followed suit. (AP Photo/Pavel Golovkin, File)

MOSCOW -- Authorities in four Russian regions have made coronavirus vaccines mandatory this week for workers in retail, education and other service sectors, part of an effort to boost the country's low immunization rates as coronavirus infections continue to soar.

Moscow, where infection tallies spiked sharply this month, first announced the requirement Wednesday and the surrounding Moscow region, the Siberian region of Kemerovo and the Far East region of Sakhalin promptly followed.

Officials in the four regions ordered businesses and institutions involved in retail, education, health care, public transportation, beauty, entertainment and other industries that serve a large number of people to ensure that at least 60% of their staffs are fully vaccinated.

In Moscow, the Moscow region and Kemerovo, officials set a mid-August deadline for the threshold to be reached. Sakhalin authorities did not set a deadline but said that individuals who refuse to get vaccinated without a valid medical reason would be suspended from work until they got their shots.

Officials in Moscow said they would start inspecting eligible companies in mid-July -- a deadline by which 60% of employees are required to get at least one shot of the vaccine -- and impose fines of up to $14,000 on ones that don't comply.

Moscow Mayor Sergei Sobyanin said Thursday that the city is being hard-hit by a new strain of the virus that is "more aggressive, more difficult to tolerate, spreads faster." The national coronavirus task force reported 6,195 new infections in the city over the previous day -- a 66% rise from the daily tally on June 1.

Russia was among the first countries in the world to deploy a coronavirus vaccine, and authorities have a goal of immunizing 60% of the country's adults, or about 69 million people, by the fall. But Russia's vaccination rate has lagged behind many other nations.

As of early June, 18 million people -- or just 12% of the 146-million population -- had received at least one dose. Experts have expressed doubts that the government's target can be met.

The Kremlin has repeatedly rejected the idea of ordering mandatory vaccinations nationwide. Commenting on the move by the four regions, spokesman Dmitry Peskov stressed Thursday that "it is not a sweeping [mandatory] vaccination of the population."

"We are talking about mandatory vaccination for certain sectors of the economy. Considering how the wave of the outbreak is unfolding, it is rather justified," Peskov said during a call with reporters.

He said regional governors made their decisions based on local infection trends and that "voluntary vaccination rates really leave room for improvement."

Russia has reported more than 5.2 million confirmed virus cases and nearly 126,000 deaths. New daily cases have averaged around 14,000 this week, compared to last week's average of 9,000.

The regional vaccine requirements drew mixed views in Russia. Russia's business ombudsman, Boris Titov, said the business community would welcome the mandates if they prove to be an alternative to restricting their work.

Separately, some of the poorest countries in the world are facing a surge in virus cases as more contagious variants take hold during a crippling shortage of vaccine.

Africa is especially vulnerable. Its 1.3 billion people account for 18% of the world's population, but the continent has received only 2% of all vaccine doses administered globally. And some African countries have yet to dispense a single shot.

Health experts and world leaders have repeatedly warned that even if rich nations immunize all their people, the pandemic will not be defeated if the virus is allowed to spread in countries starved of vaccine.

"We've said all through this pandemic that we are not safe unless we are all safe," said John Nkengasong, a Cameroonian virologist who heads the Africa Centers for Disease Control and Prevention. "We are only as strong as the weakest link."

Zimbabwe, which has imposed new lockdown measures because of a sharp rise in deaths and cases in the country of over 15 million people, has used just over 1 million of 1.7 million doses, blaming shortages in urban areas on logistical challenges.

In Zambia, where a vaccination campaign has stalled, authorities reported that the country is running out of bottled oxygen. Sick people whose symptoms are not severe are being turned away by hospitals in Lusaka, the capital.

Uganda is likewise fighting a sharp rise in cases and is seeing an array of variants.

Authorities report that the surge is infecting more people in their 20s and 30s. Ugandan President Yoweri Museveni imposed new restrictions this month that included closing all schools.

But he avoided the extreme lockdown measures of last year, saying he didn't want to hurt people's livelihoods in a country with a vast informal sector.

In a global outcry over the gap between the haves and the have-nots, the U.S., Britain and the other Group of Seven wealthy nations agreed last week to provide at least 1 billion doses to struggling countries over the next year, with deliveries starting in August.

In the meantime, many of the world's poor wait and worry.

In Afghanistan, where a surge threatens to overwhelm a war-battered health system, 700,000 doses donated by China arrived over the weekend, and within hours, "people were fighting with each other to get to the front of the line," said Health Ministry spokesman Dr. Ghulam Dastigir Nazari.

In Haiti, hospitals are turning away patients as the country awaits its first shipment of vaccines. A major delivery through Covax was delayed over government concern about side effects and a lack of infrastructure to keep the doses properly refrigerated.

Indonesia's president ordered authorities to speed up the country's vaccination campaign as the World Health Organization warned Thursday of the need to increase social restrictions in the country as a fresh surge of coronavirus infections caused by worrisome variants arises.

"We need vaccination acceleration in order to achieve communal immunity, which we hope can stop the covid-19 spread," President Joko Widodo said in a remarks while visiting a vaccination center just outside the capital, Jakarta.

Widodo said he ordered his Cabinet ministers and local governments to increase the number of people vaccinated each day to 1 million by next month. He said Indonesia is currently vaccinating half a million people a day.