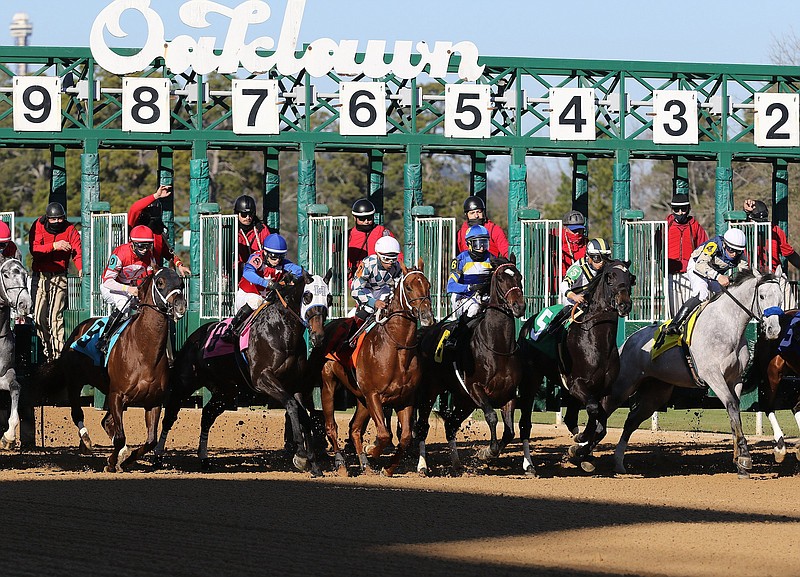 Oaklawn Racing Casino Resort in Hot Springs will open its 2021-22 live racing season Dec. 3, it was announced Thursday. The proposal for an extended schedule was approved by the Arkansas Racing Commission and includes racing through May 8. (Arkansas Democrat-Gazette/Thomas Metthe)

Oaklawn's proposal for an extended racing schedule next season was approved by the Arkansas Racing Commission during a teleconference Thursday.

The new schedule will include racing in December and add nine racing days. Oaklawn Racing Casino Resort's 2021-22 season is scheduled to run from Dec. 3 through May 8. It will include 66 scheduled racing days, up from 57 last season, which ran from Jan. 22-May 1.

"This is great for racing," Oaklawn President Louis Cella said. "It's good for Oaklawn. It's good for our horsemen. It think it's positive. We are ever changing, and this is one more change in our favor."

Attorney Skip Ebel, general counsel for Oaklawn Jockey Club, said during the teleconference that many would benefit from the extension and from racing in December. He said he has encountered broad support from the track's horsemen.

"I believe it also has the support of the tourism industry in Hot Springs and Garland County," Ebel said.

Five of the seven state racing commissioners participated in a teleconference vote. Each voted in favor of the proposal.

The opportunity for horsemen to race 2-year-old horses in December at Oaklawn is among the most significant effects of the change. Oaklawn has not previously allowed 2-year-old horses to race in its January through April or May schedules. Races for 2-year-olds are common nationwide in the fall and early winter, thus the track plans to schedule races for them in December.

Oaklawn has not yet released a stakes schedule for the 2021-22 season, but Cella said the new schedule provides an opportunity for a stakes race for 2-year-old horses.

"On paper, we're kicking that around right now," he said. "We don't want to get far over our skis right now, but we we will explore that."

The schedule will include 20 weeks of three racing days, each running Friday-Sunday; one week of four race days for Presidents Day weekend on Feb. 18-21; and one week of two race days when the track closes for Easter Sunday on April 17.

"This is a good thing," 2015 Oaklawn training champion Chris Hartman said. "Running in December is great. I think it will be a winner for everybody."

Most horsemen have expressed delight about the new schedule, particularly trainers who move their stables from Churchill Downs in Louisville, Ky., to Oaklawn in late fall. It will shorten their downtime from nearly two months to five days. Churchill's fall meet concludes Nov. 28.

"It's tough for the owners and the horsemen when we get in there the first week of December to sit there and get ready without racing," said Robertino Diodoro, Oaklawn's 2020 training champion. "This is going to help the whole racing industry and the town of Hot Springs. There should be a standing ovation for the Cella family and the racing commission for approving this proposal."

Longtime Oaklawn jockey Terry Thompson said the change is a winning situation for everyone involved.

"I think this is a great deal," he said. "It sounds like they're going in the right direction."

"Forty percent of our backstretch comes from Churchill, so you were talking about waiting from Thanksgiving to late January," Cella said. "That's a long time to not have an ability to run for a purse. They have daily operating expenses, from vet bills to feed to grooms and staff, and this is an opportunity for them."

Diodoro is celebrating the change.

"Myself, I'm doing back flips," he said. "In so many ways, this is really exciting for people who are involved in this game."

• Oaklawn's proposal for an extended live racing schedule next season was approved by the Arkansas Racing Commision on Thursday. The meet is scheduled to run Dec. 3 through May 8 for a total of 66 racing days. There will not be any racing on Christmas weekend or Easter Sunday (April 17), however there will be live racing on Presidents' Day (Feb. 21). Here is a look at the dates for the 2021-22 season: