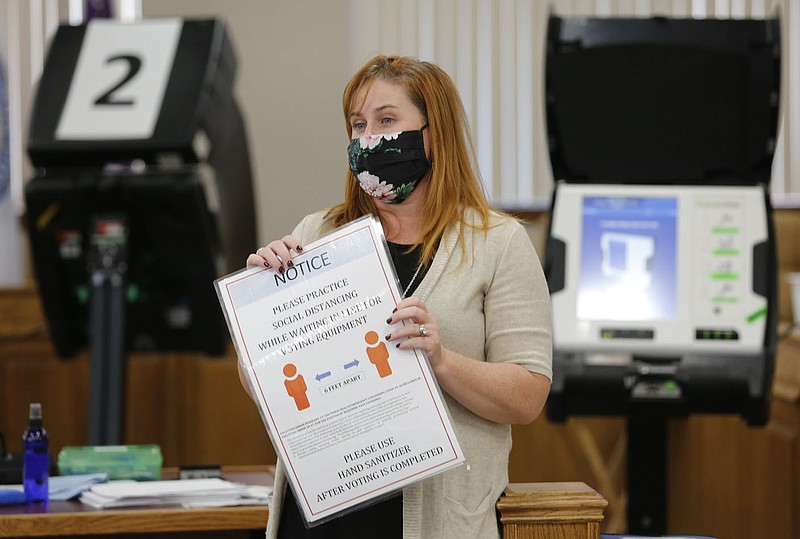 Fayetteville has set a special election for Aug. 10 to ask voters to continue the city's 1-cent sales tax. The tax generates about $22.5 million each year that goes toward the city's general operations and capital improvements.

The tax is set to expire in June 2023. A successful election would continue the tax another 10 years.

Some election deadlines are different in the new laws, according to Price. Under existing laws, she said, voters have until the Monday before an election to turn in absentee ballots. The new law, Act 973, changes that deadline to the Friday before the election.

Another new law, Act 249, changes the procedures governing voters who don't have an acceptable identification with them when they cast their ballots. In past elections, those voters could use sworn statements attesting to their identities instead of government-issued identification. The new law requires voters to bring documentation of their identity to the county clerk's office within six days of election day.

The new laws are subject to a pending legal challenge in Pulaski County Circuit Court, which could further complicate implementation, Price said.

The 38-page lawsuit filed May 19 by Arkansas United and the League of Women Voters of Arkansas asks Pulaski County Circuit Judge Wendell Griffen to block implementation of -- and eventually strike down as unconstitutional -- four laws out of the 24 election measures passed this year.

In addition to the three laws Price discussed with the Election Commission, the lawsuit also challenges Act 728, which regulates campaigning at polling places during voting.

Legislative backers of the new laws cannot point to any significant election administration problems that would justify the changes they have enacted, according to the lawsuit.

Defendants in the lawsuit include Secretary of State John Thurston and the state Board of Election Commissioners.

Price said she hasn't seen anything indicating the lawsuit will be resolved before the Aug. 10 election, so she asked the State Board of Election Commissioners for guidance.

Renee Oelschlaeger, Election Commission chairman, said it's important to have the guidance from the state in writing so the county can defend its handling of the election, and because "somebody is going to be unhappy one way or the other."

Kim Dennison, Benton County's election coordinator, said she has special elections set for September in Garfield and in Pea Ridge. The Garfield election asks voters to extend the city's 1% sales tax while Pea Ridge is asking voters to approve a new 1% sales tax.

Dennison said she expects to conduct those elections according to the laws that go into effect in July, even though they were called under the previously existing laws.

The Washington County Election Commission will host a meeting with election commissioners and officials from other Arkansas counties and state election officials at 10 a.m. July 21 at the Sheriff’s Office Annex. The meeting allows county election officials to discuss issues that affect how they conduct elections, including new election laws approved by the state Legislature.