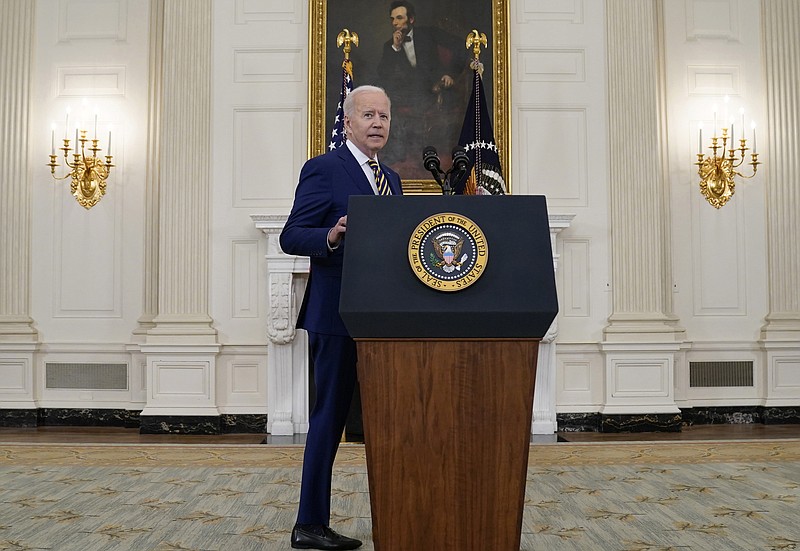 Noting the 300 million-shots mark as “an important milestone,” President Joe Biden said Friday at the White House, that “it just didn’t happen on its own or by chance.” (AP/Evan Vucci)

With the United States unlikely to reach President Joe Biden's goal of getting 70% of American adults at least partly vaccinated against the coronavirus by July 4, he trumpeted a different milestone: 300 million shots in his first 150 days in office.

Biden spoke about the vaccination drive from the White House as his administration makes a last push to reach the July goal. Vice President Kamala Harris and the Health and Human Services secretary, Xavier Becerra, were both on the road Friday, trying to drum up enthusiasm for the vaccine. Harris was in Atlanta, and Becerra was headed to Colorado.

The 300 million mark is "an important milestone," the president said, touting his administration's work. "It just didn't happen on its own or by chance."

Biden took office warning of a "dark winter" ahead, as deaths were near peak levels and vaccinations were barely underway, and he is trying to portray the virus as in retreat as he nears six months in office. A fact sheet distributed by the White House before Friday's remarks noted that 15 states and Washington, D.C., have gotten at least 70% of adults at least one shot.

"The results are clear: America is starting to look like America again, and entering a summer of joy and freedom," the document said.

When Biden set the July goal in early May, he said meeting it would demonstrate that the United States had taken "a serious step toward a return to normal," and for many people that already seems to be the case. This week, California and New York lifted virtually all their pandemic restrictions on business and social distancing.

But the time frame is tight. An analysis by The New York Times shows that if the rate of adult vaccinations continues on the seven-day average, the country will fall short of the 70% goal, with 67.5% of American adults having had at least their first shot by July 4.

As of Thursday, 65% of adults have had at least one shot, according to data from the Centers for Disease Control and Prevention. But the number of Americans getting their first shot has been dropping steadily, from about 500,000 a day to about 200,000 a day since Biden announced that June would be a "month of action" to reach his goal.

"I don't see an intervention that could really bring back an exponential increase in demand to get the kind of numbers that we probably need to get to 70%," said Dr. Marcus Plescia, chief medical officer of the Association of State and Territorial Health Officials. "Every day it seems like it's starting to trickle along. So I think realistically, probably the best thing we could do is to try to get to steady state at this lower level."

[Video not showing up above? Click here to watch » https://www.youtube.com/watch?v=aPZkKmRiVgI]

Experts say that from a disease-control perspective, the difference between 67% and 70% is insignificant. But from a political perspective, it would be the first time Biden has set a pandemic-related goal that has not been met. Biden has continually set relatively modest targets and exceeded them, including his pledge to get 100 million shots in the arms of Americans by his first 100 days in office.

"The 70% target is not a hard-and-fast number; not hitting it exactly does not mean the sky is falling," said Jen Kates, director of global health and HIV policy at the Kaiser Family Foundation. "On the other hand, it has symbolic importance. There has been a lot of emphasis on getting to that point, and not hitting it is a reminder of how difficult the remaining stretch is going to be."

When asked about the July 4 deadline Thursday, Jeffrey Zients, the White House coronavirus response coordinator, avoided saying specifically that the nation would reach the 70% threshold by that date.

The White House says Biden's whole-of-government approach to the vaccination effort has put the virus in retreat, which in turn has brought covid-19 cases, hospitalizations and deaths to their lowest levels in more than a year. The administration is in the midst of a monthlong blitz to combat vaccine hesitancy and the lack of urgency some people feel to get the shots, particularly in the South and Midwest.

Speaking to students at a vaccination mobilization event at Clark Atlanta University in Georgia on Friday, Harris warned of the dangers of misinformation and framed the decision to get vaccinated as a way to take power back from the virus.

There are people who "may have heard things that aren't quite true," she said. "Let's arm ourselves with the truth. When people say it seems like this vaccine came about overnight, no, it didn't. It's the result of many, many years of research."

CDC Director Rochelle Walensky said Friday that she expects the delta variant will become the dominant strain in the U.S. It has become dominant in Britain after it was first detected in India.

During an appearance on ABC's "Good Morning America," she said the vaccines work and told Americans who get shots that "you'll be protected against this delta variant."

When Johnson & Johnson's single-dose vaccine was authorized for emergency use in late February, ​it was seen as a breakthrough for reaching vulnerable and isolated Americans, a crucial alternative to vaccines that require two shots weeks apart and fussier storage. It was soon popular on college campuses, in door-to-door campaigns and with harder-to-reach communities that often struggle with access to health care.

But with only 11.8 million doses administered in the United States -- less than 4% of the total -- the "one and done" vaccine has fallen flat. States have warned for weeks that they may not find recipients for millions of doses that soon will expire, partly because the vaccine's appeal dropped after it was linked to a rare but serious blood-clotting disorder and injections were paused for 10 days in April.

The vaccine took another hit last week, when regulators told Johnson & Johnson that it should throw out tens of millions of additional doses produced at a plant in Baltimore because they might be contaminated. The diminished supply and enthusiasm for the shot mean that its role in the United States is fading fast, even though millions of Americans have yet to be vaccinated.

"It's just not what I think anybody would have hoped it would be when it came out," said Dave Baden, chief financial officer of the Oregon Health Authority.

Health officials in a number of other states presented a similarly discouraging picture. The pause on the Johnson & Johnson vaccine, they said, effectively kicked it aside for good; only about 3.5 million doses have been used since the pause was lifted April 23.

Kim Deti, a spokesperson for the Wyoming Health Department, said the graph of uptake in her state told the vaccine's story: a significant climb in the early weeks of its rollout, followed by a plateau that began around the pause.

State officials had initially hoped the Johnson & Johnson shot would be a workhorse: a versatile, easy-to-store tool they could stockpile at mass vaccination sites, quickly reaching thousands of people they would not need to track down for a second dose. But after demand dropped, their goals grew more modest.

It is being used in a smaller-bore fashion this week -- at the Fiesta festival in San Antonio; the College World Series in Omaha, Neb.; a Juneteenth celebration in Johnstown, Pa.; and an aquarium in Long Beach, Calif. At a food bank in Reno, Nev., 12 doses of the Johnson & Johnson vaccine were administered Thursday, said Jocelyn Lantrip, director of marketing and communications for the Food Bank of Northern Nevada.

Between the small number of doses distributed and the lack of interest in them, public health experts say, the United States missed a critical opportunity to address health disparities with a vaccine that should have been ideal for reaching vulnerable populations.

Dr. Chip Riggins, a regional medical director who oversees vaccine events in south-central Louisiana, said few organizers requested the shot anymore, even in a state with one of the lowest vaccination rates in the country.

"In the early days of J&J, working with the African American community and the churches, the faith community here, it was a very, very popular option," he said. "It pains me that it isn't being accepted like it was before the pause."

Riggins said he had limited success in recent months sending the vaccine to churches, casinos and even gas stations, including one in LaPlace, La., where organizers offered the shot Thursday. An international crew on a ship was elated to receive their shots last weekend, he said. But not being able to fully protect more people with just a single dose, he said, was hindering the state's progress.

Johnson & Johnson's decline in the United States has dovetailed with decreasing demand for covid vaccines overall. Nearly 30 million doses of the Pfizer-BioNTech vaccine are sitting unused, as are about 25 million of Moderna's.

Meanwhile, a federal judge Friday ruled for Florida in a lawsuit challenging a CDC order making it difficult for cruise ships to resume sailing.

U.S. District Judge Steven Merryday wrote in a 124-page decision that Florida would be harmed if the order, which the state said effectively blocked most cruises, were to continue.

The Tampa-based judge granted a preliminary injunction that prevents the CDC from enforcing the order pending further legal action on a broader Florida lawsuit.

"This order finds that Florida is highly likely to prevail on the merits of the claim that CDC's conditional sailing order and the implementing orders exceed the authority delegated to the CDC," Merryday wrote.

However, the judge delayed the effect of his order until just after midnight July 18.

"Today's ruling is a victory for the hardworking Floridians whose livelihoods depend on the cruise industry," said Moody, a Republican. "The federal government does not, nor should it ever, have the authority to single out and lock down an entire industry indefinitely."

While the CDC could appeal, Merryday ordered both sides to return to mediation to attempt to work out a full solution -- a previous attempt failed -- and said the CDC could fashion a modification in which it would retain some public health authority.

The CDC first flatly halted cruise ships from sailing in March 2020 in response to the pandemic, which had affected passengers and crew on numerous ships. Then on Oct. 30 it imposed a four-phase conditional framework it said would allow the industry to gradually resume operations if certain thresholds were met.

Republican Gov. Ron DeSantis said in a statement that the framework imposed onerous bureaucratic requirements on the industry, such as requiring a vaccine passport for passengers and that cruise ships conduct a simulated voyage before embarking passengers.

"The CDC has been wrong all along, and they knew it," DeSantis said.

"Florida persuasively claims that the conditional sailing order will shut down most cruises through the summer and perhaps much longer," the judge wrote, adding that Florida "faces an increasingly threatening and imminent prospect that the cruise industry will depart the state."

Information for this article was contributed by Sheryl Gay Stolberg, Amy Schoenfeld Walker and Noah Weiland of The New York Times; and by Darlene Superville, Josh Boak, Zeke Miller, Curt Anderson and David Koenig of The Associated Press.