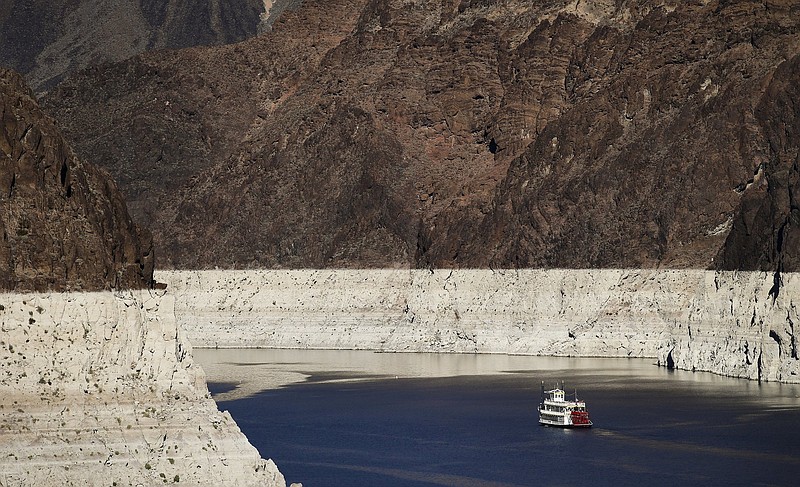 A boat glides through Lake Mead at Hoover Dam near Boulder City, Nev., in a file photo. Despite drought, cities in the U.S. West expect their populations to grow considerably in the coming decades. (AP)

CARSON CITY, Nev. -- Record-breaking heat and historic drought in the U.S. West are doing little to discourage cities from planning to welcome millions of new residents in the decades ahead.

From Phoenix to Boise, Idaho, officials are preparing for a future both with more people and less water, seeking to balance growth and conservation. Development is constrained by the fact that 46% of the 11-state Western region is federal land, managed by agencies like the U.S. Forest Service and Bureau of Land Management that are responsible for maintaining it for future generations.

That's led officials in states like Nevada and Utah to lobby the federal government to approve land transfers to allow developers to build homes and businesses on what had been public land. Supporters in the two states have won over environmentalists in the past with provisions that allocate proceeds to conservation projects, preserve other federal lands and prevent road construction, logging or energy exploration.

A small group of opponents is arguing that routinely approving these kinds of "swaps" to facilitate growth isn't sustainable, particularly in areas that rely on a shrinking water supply.

For the seven states that depend on the Colorado River -- Arizona, California, Colorado, Nevada, New Mexico, Utah and Wyoming -- a regional drought is so severe that less water is flowing to Lake Mead and Lake Powell, the two man-made reservoirs where river water is stored.

If the level of Lake Mead keeps dropping through the summer as projected, the federal government likely will issue its first-ever official shortage declaration, which will prompt cuts in the water Arizona and Nevada receive.

The predicament is playing out in the Las Vegas area, where environmental groups, local officials and homebuilders united behind a proposal from U.S. Sen. Catherine Cortez Masto that was heard in the Senate this week.

The Nevada Democrat is pushing what she calls the largest conservation bill in state history to designate more than 3,125 square miles of land for additional protections -- roughly the size of Delaware and Rhode Island combined -- and 48 square miles for commercial and residential development, which is about the size of San Francisco.

Some conservationists support the proposal because it would add federal land to the Red Rock Canyon National Conservation Area for recreation and reclassify some undeveloped parts of Clark County, where Las Vegas is, and the Desert National Wildlife Refuge as Bureau of Land Management "wilderness areas," which carry stronger protections than national parks.

Jocelyn Torres, field director for the Conservation Lands Foundation, said at the Senate hearing Wednesday that the protections would restore lands to more efficiently capture carbon, which would help mitigate rising temperatures.

"Our public lands present our best chance to address climate change, our biodiversity crisis and invest in our local communities and economy," she said.

The effort mirrors land-management pushes made over the past decade in Washington and Emery counties in Utah to designate wilderness and sell other parcels to developers to meet growth projections. The U.S. Census Bureau reported that St. George, in Washington County, was the nation's fifth-fastest growing metropolitan area last year.

In both regions, affordable housing is among officials' top concerns. Soaring home prices in California have added to a flow of people leaving for nearby states like Nevada, Arizona and Colorado, where open land, lower tax rates and jobs are attracting new residents.

The fast-growing Las Vegas area lacks the housing supply to meet projected population growth. A 2019 University of Nevada, Las Vegas, study that Cortez Masto's legislation mentions projected that the population in Clark County would increase 35%, to 3.1 million residents, by 2060. That increase will be difficult to accommodate without building in existing communities or public lands.

"Due to this federal ownership, our options for planning and development are very constrained and require constant coordination with federal agencies," said Marcie Henson, director of the Clark County Air Quality Department.

Growth may stretch an already limited water supply. Water officials support the proposal, which allocates funding to maintaining the channels used to recycle wastewater through Lake Mead. The region has enacted some of the U.S. West's most aggressive conservation measures, including an outright ban on decorative grass in certain places, to prepare for growth.

Last year, water officials projected a worst-case scenario in which consumption patterns and climate change could force them to find other supplies as soon as 2056. Critics say the projections are concerning.

"This legislation doesn't have an identified, sustainable supply of water going out 50 years in the future," said Kyle Roerink, executive director of the Nevada conservation group Great Basin Water Network. "When you couple that with everything that we're reading about at Lake Mead and the Colorado River, it's very precarious to be putting forward a bill that invites another 825,000 people to the Mojave Desert." 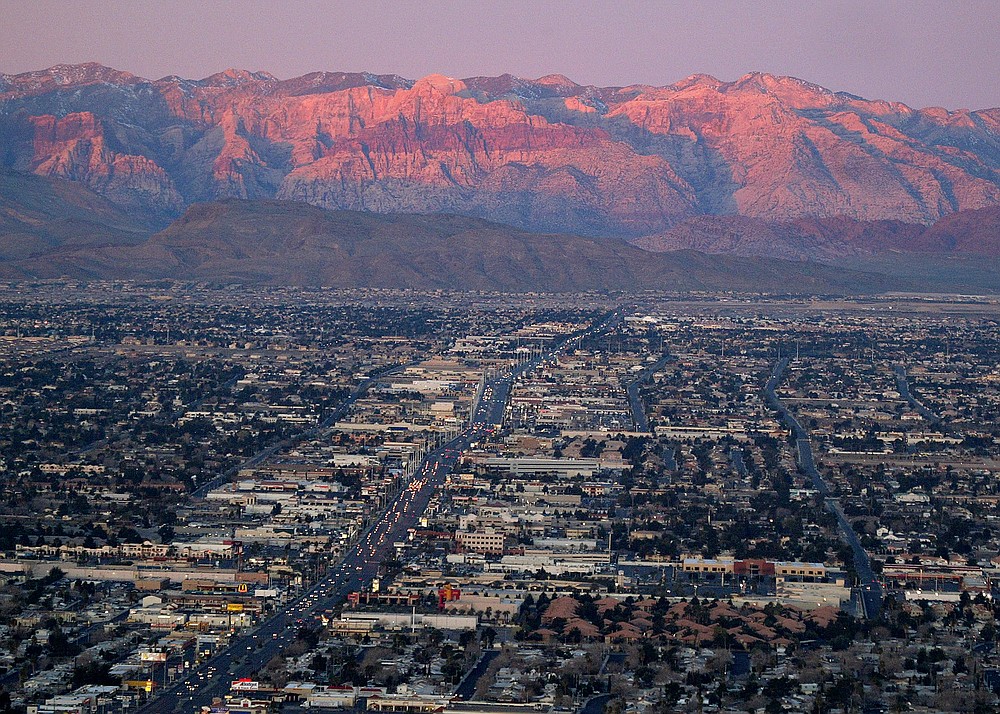 FILE - In this Feb. 9, 2005, file photo, shows the suburbs of Las Vegas from atop the Stratosphere tower looking west down Sahara Ave., towards the Spring Mountains. Despite drought, cities in the U.S. West expect their populations to grow considerably in the coming decades. From Phoenix to Boise, officials are working to ensure they have the resources, infrastructure and housing supply to meet growth projections. In certain parts of the region, their efforts are constrained by the fact that sprawling metro areas are surrounded by land owned by the federal government. U.S. Sen. Catherine Cortez Masto wants to remedy the issue in Las Vegas by strengthening protections for some public lands while approving the sale of others to commercial and residential developers. (AP Photo/Joe Cavaretta, File) 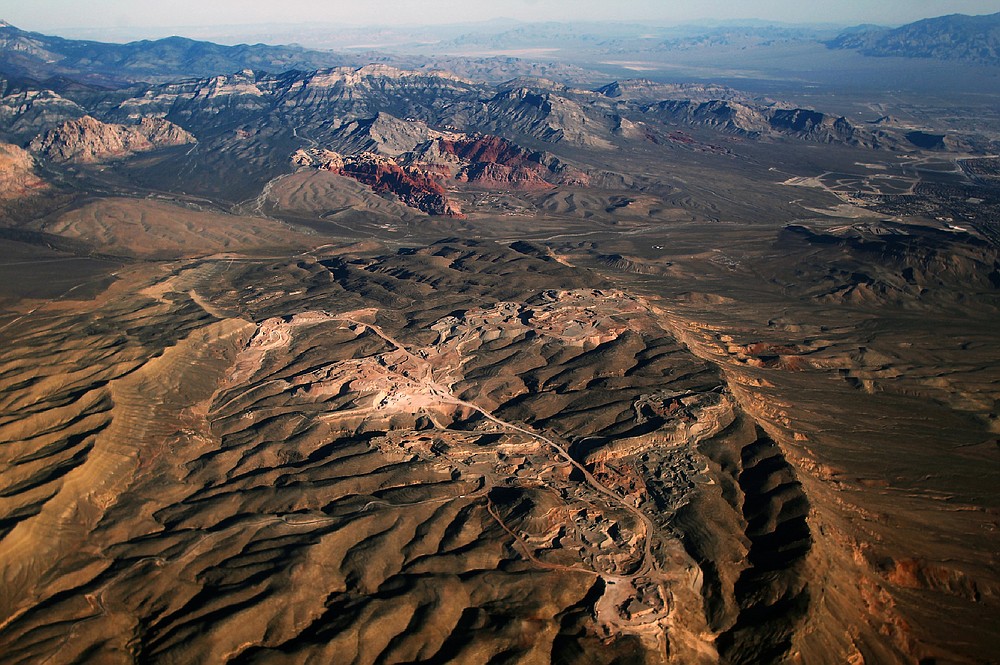 FILE - In this Oct. 11, 2016 photo, a gypsum mine owned by developer Jim Rhodes, who wants to develop housing on the site, is seen in the foreground while the Red Rock Canyon National Conservation Area is seen in the distance. Despite drought, cities in the U.S. West expect their populations to grow considerably in the coming decades. From Phoenix to Boise, officials are working to ensure they have the resources, infrastructure and housing supply to meet growth projections. In certain parts of the region, their efforts are constrained by the fact that sprawling metro areas are surrounded by land owned by the federal government. U.S. Sen. Catherine Cortez Masto wants to remedy the issue in Las Vegas by strengthening protections for some public lands while approving the sale of others to commercial and residential developers. (L.E. Baskow/Las Vegas Sun via AP, File)