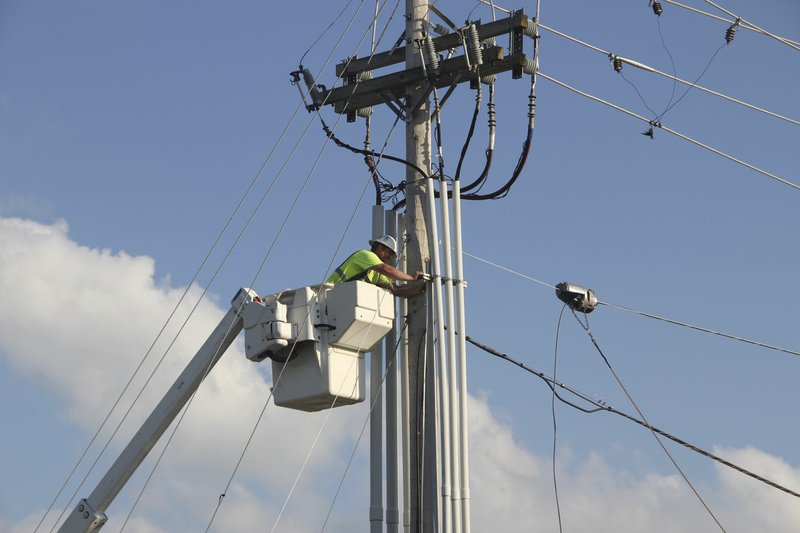 The Arkansas Legislative Council and its co-chairmen on Friday authorized the state Department of Commerce to use up to $31 million in federal American Rescue Plan coronavirus relief funds for broadband grants.

The council's action were taken after Gov. Asa Hutchinson initially declined a subcommittee's recommendation Tuesday to reduce the department's request, which originally was $150 million. The governor decided during the meeting Friday to reduce the request to $30 million.

The back and forth is the latest skirmish between the Republican governor's administration and the Republican-dominated Legislature over the use of the state's windfall of federal coronavirus relief funds and American Rescue Plan funds during the past year or so.

At issue Friday was how much in spending authority to grant the Commerce Department for the use of American Rescue Plan funds for broadband grants, after some lawmakers' questions about the sufficiency of the state's broadband planning and coordination of its efforts with others.

"I was pleased the $31 million was funded, but there is a lot of work to be done," Hutchinson said Friday in a written statement.

"Arkansas needs to be able to utilize American Rescue Plan money in a timely and efficient manner to get broadband throughout the state," he said.

Hutchinson said the Commerce Department's original $150 million request should have been approved by the Legislative Council.

But the council's approval of up to $31 million means the shovel-ready projects will not be delayed any further, Hutchinson said.

"I am hopeful the additional projects will be funded in the near future so broadband can be deployed to 150,000 Arkansans."

"There isn't a legislator here who doesn't want to have broadband in their community and be able to serve their people, so that's not really the issue," Sen. Jane English, R-North Little Rock, said during the council's meeting.

"The one thing I do know is there is so much money out there, including this, and cities and counties and Department of Agriculture and Department of Commerce, so somehow we ought to be able to find ways that we can coordinate these efforts."

The Arkansas Rural Connect grant program has awarded $113.5 million in federal coronavirus relief funds and $4.5 million in state funds to 76 projects, according to the Commerce Department.

House Speaker Matthew Shepherd, R-El Dorado, said, "I would like confirmation that this $30 million will be applied to the projects that are in front of us today, the 17 projects."

Shepherd said the other $115 million worth of projects included some that may be able to be adjusted in a matter of days or weeks, and others that may never be adjusted and not move forward.

Preston said there are probably 15 or 20 broadband applications that are going to need minor tweaks and could be fixed in a day or two, so "we come back [seeking] $80 million" in spending authority and "a week later that has been met."

Sen. Missy Irvin, R-Mountain View, said, "I don't think it is a bad time to hit the pause button."

The fixed wireless projects in the $115 million worth of applications would have to be changed to fiber projects and that could change the department's request for spending authority, she said.

"This is just one piece of a particular program that has been successful that the Legislature worked very closely with us on to develop this program, approved the rules for it and used [federal coronavirus relief funds] for," Preston said.

"Now we are making the adjustment to utilize [the American Rescue Plan funds]," he said. "We want to build that infrastructure for the long-term.

"We do have plenty of fiber projects ready to go that we can get into the ground and get us moving, " Preston said. "We just don't want people to have to wait any longer. They have been waiting long enough."

English said lawmakers want to have a larger discussion about coordinating broadband efforts throughout the state.

""What does it look like five years from now and how do we get there?"

Preston said, "This is one piece of the bigger broadband discussion. ... This is what we have in front of us and that is what we have been focused on and we would like to be part of that conversation."

Asked whether the state needs to hire a consultant to develop a broadband plan, Hutchinson said afterward that the state has a plan through the Rural Connect Program approved by the Legislature.

The council eventually approved a motion by Sen. Jonathan Dismang, R-Searcy, to allow its co-chairmen, Sen. Terry Rice, R-Waldron, and Rep. Jeff Wardlaw, R-Hermitage, to sign a letter authorizing the Commerce Department to use up to $31 million for the grants. Rice and Wardlaw later said they approved that letter.

The studies are required in federal grant and loan applications for broadband infrastructure. Communities can use their studies to apply for funding from the Federal Communications Commission, U.S. Department of Agriculture and other programs offering federal grants or loans for broadband development, he said.

But the council decided to delay action on the proposed $74,426.46 Rural Broadband I.D. grant award to Phillips County, after Rep. Lanny Fite, R-Benton, objected to paying part of the grant to the Phillips County judge.

Phillips County Judge Clark Hall, who is a former Democratic state representative, will act as the project director for the broadband grant and spend an estimated half day a week on this project for six months, accounting for 5% of his $65,000 annual salary, so Phillips County requested $3,250 for that, according to Phillips County's grant application.