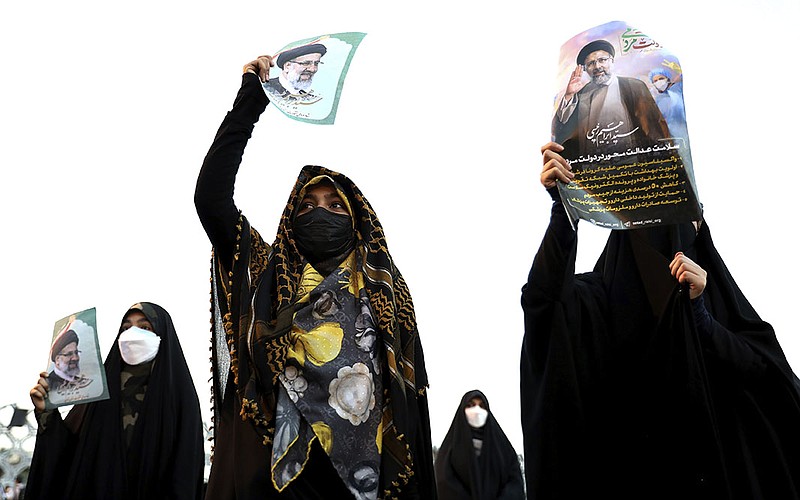 Supporters of Iranian president-elect Ebrahim Raisi celebrate his victory Saturday in Tehran. Many moderate and liberal-leaning Iranians sat out the vote, seen by some as more of a coronation than a legitimate election. (AP/Ebrahim Noroozi)

"I hope I can respond well to the people's confidence, vote and kindness during my term," said victor Ebrahim Raisi.

Hard-liners are now firmly in control across the government as negotiations in Vienna continue to try to save the tattered deal intended to limit Iran's nuclear program.

The election of Raisi, who is already sanctioned by the U.S. in part over his involvement in the mass execution of thousands of political prisoners in 1988, became more of a coronation after his strongest competitors found themselves disqualified from running.

That sparked calls for a boycott, and many voters did stay home -- out of more than 59 million people eligible, only 28.9 million voted Friday. And some 3.7 million people either accidentally or intentionally voided their ballots, far beyond the amount seen in previous elections and suggesting that some wanted none of the four candidates.

[Video not showing up above? Click here to watch » https://www.youtube.com/watch?v=fM0IJ-KG6sM]

Some Iranians in fact said they turned in blank ballots as a way of participating in the election while protesting the lack of candidates who represented their views.

Huge swaths of moderate and liberal-leaning Iranians sat out the election, saying the campaign had been engineered to put Raisi in office or that voting would make little difference. Raisi had been expected to win handily despite late attempts by the more moderate reformist camp to consolidate support behind their main candidate: Abdolnasser Hemmati, a former Central Bank chief, who came in third.

Iranian state television immediately blamed challenges of the coronavirus pandemic and U.S. sanctions for the low participation. But the low turnout and voided ballots suggested a wider unhappiness with the tightly controlled election, as activists criticized Raisi's ascension.

"That Ebrahim Raisi has risen to the presidency instead of being investigated for the crimes against humanity of murder, enforced disappearance and torture is a grim reminder that impunity reigns supreme in Iran," Amnesty International Secretary-General Agnes Callamard said.

Hemmati, viewed as a stand-in for outgoing President Hassan Rouhani, came in third with 2.4 million votes. Amirhossein Ghazizadeh Hashemi was last with just below 1 million.

Interior Minister Abdolreza Rahmani Fazli did not explain the high number of voided ballots. Elections in 2017 and 2012 each saw some 1.2 million voided ballots compared with this year's 3.7 million. Iran does not allow international election observers to monitor its polls.

Hemmati, like the other losing candidates, conceded even before the results were released.

"I hope your administration provides causes for pride for the Islamic Republic of Iran, improves the economy and life with comfort and welfare for the great nation of Iran," he said of Raisi on Instagram.

Good wishes also came from Dubai's ruler, Sheikh Mohammed bin Rashid Al Maktoum, who also serves as vice president and prime minister of the hereditarily ruled United Arab Emirates. The UAE has been trying to deescalate tensions with Iran since a series of attacks on shipping off its coast in 2019 that the U.S. Navy blamed on Iran.

Also congratulating Raisi was Oman, which has served as an interlocutor between Tehran and the West.

Iran's nemesis Israel, however, slammed the new leader, with Foreign Minister Yair Lapid calling Raisi "the Butcher of Tehran" for his alleged involvement in the deaths of "thousands of Iranians."

Rouhani, who in 2017 dismissed Raisi as an opponent in his reelection as someone knowing only about "executions and imprisoning" people, met the cleric Saturday and congratulated him.

"Not complaints about the economic problems of poor people, not the frustrations about the threat of the pandemic and not opposition aimed at disappointing people could overcome the determination of the nation of Iran," he said.

Since the 1979 Islamic Revolution overthrew the shah, Iran's theocracy has cited voter turnout as a sign of its legitimacy.

A constitutional panel under Khamenei disqualified reformists and those backing Rouhani, whose administration reached the 2015 nuclear deal with world powers and saw it disintegrate three years later with then-President Donald Trump's unilateral withdrawal.

Raisi's election comes at a time when Tehran is enriching uranium at its highest levels ever, though still short of weapons-grade. Tensions remain high with both the U.S. and Israel. Israel is believed to have carried out a series of attacks targeting Iranian nuclear sites, as well as assassinating the scientist who created its military atomic program decades ago.

Raisi also has become the first serving Iranian president sanctioned by the U.S. government even before entering office over his involvement in the 1988 mass executions, as well as his time as the head of Iran's internationally criticized judiciary -- one of the world's top executioners.

The U.S. State Department did not respond to a request for comment.

"Raisi's ambivalence about foreign interaction will only worsen the chances that Washington could persuade Tehran to accept further limits on its nuclear program, regional influence, or missile program, at least in [President] Joe Biden's first term in office," wrote Henry Rome, an analyst at the Eurasia Group who studies Iran.

Yet Raisi has said he will remain committed to the nuclear deal and do all he can to remove sanctions.

The prospects for a renewed nuclear agreement could in fact improve with Raisi's victory, say some U.S. diplomats and Iranian analysts. Khamenei appeared to be stalling the current talks as the election approached, and there could be movement in the weeks between Rouhani's departure and Raisi's ascension.

A deal finalized then could leave Rouhani with the blame for any unpopular concessions and allow Raisi to claim credit for any economic improvements once sanctions are lifted.

At any rate, key policies such as the nuclear deal are decided by the supreme leader, who has the last word on all important matters of state.

During debates and other appearances, Raisi "was very cautious not to use the radical rhetoric that his hard-line supporters are using," while also trying to convince swing voters that hard-liners would not necessarily be part of his administration, said Ali Reza Eshraghi, a visiting scholar at the Center for Middle East and Islamic Studies at the University of North Carolina.

Raisi's reticence to lay out specific plans, along with his lack of charisma, left many Iranians with more questions than answers about the incoming president. "Beyond speculation, no one knows what he is going to do," Eshraghi said.

To his supporters, Raisi's close identification with the supreme leader, and by extension with the Islamic Revolution that brought Iran's clerical leaders to power in 1979, is part of his appeal.

Campaign posters showed Raisi's face alongside those of Khamenei and his predecessor, Ayatollah Ruhollah Khomeini, or Maj. Gen. Qassem Soleimani, the Iranian commander whose death in a U.S. airstrike last year prompted an outpouring of grief and anger among Iranians.

But Raisi's supporters also cited his resume as a staunch conservative, his promises to combat corruption, which many Iranians blame as much for the country's deep economic misery as American sanctions, and what they said was his commitment to leveling inequality among Iranians.

Iranian presidents have almost all served two four-year terms. That means Raisi, 60, could be at the helm what could be one of the most crucial moments for the country in decades -- the death of the 82-year-old Khamenei.

Speculation already has begun that Raisi might be a contender for the position, along with Khamenei's son, Mojtaba.

Information for this article was contributed by Jon Gambrell, Albert Aji and Isabel DeBre of The Associated Press; by Vivian Yee of The New York Times; and by Kareem Fahim and Sarah Dadouch of The Washington Post. 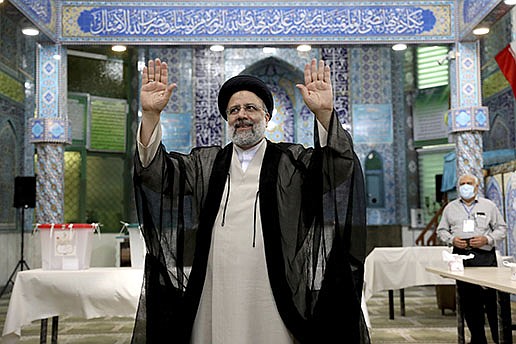 Iranian President-elect Ebrahim Raisi waves to journalists Friday after casting his vote at a polling station in Tehran. Raisi has already been sanctioned by the U.S. government for the mass execution of thousands of political prisoners in 1988. (AP/Ebrahim Noroozi) 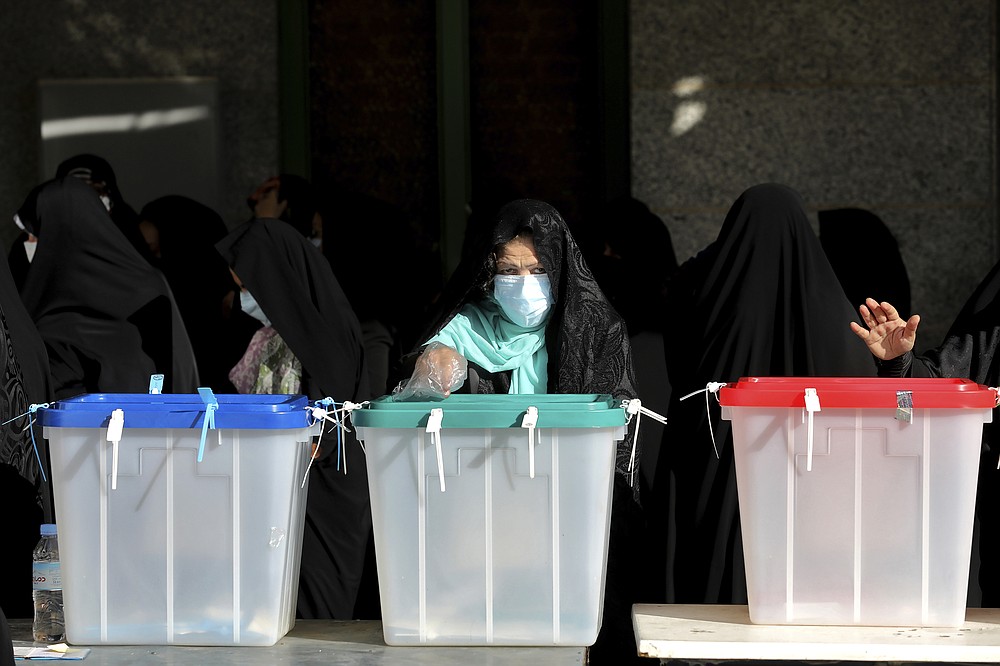 Voters cast their ballots for the presidential election at a polling station in Tehran, Iran, Friday, June 18, 2021. Iran began voting Friday in a presidential election tipped in the favor of a hard-line protege of Supreme Leader Ayatollah Ali Khamenei, fueling public apathy and sparking calls for a boycott in the Islamic Republic. (AP Photo/Ebrahim Noroozi) 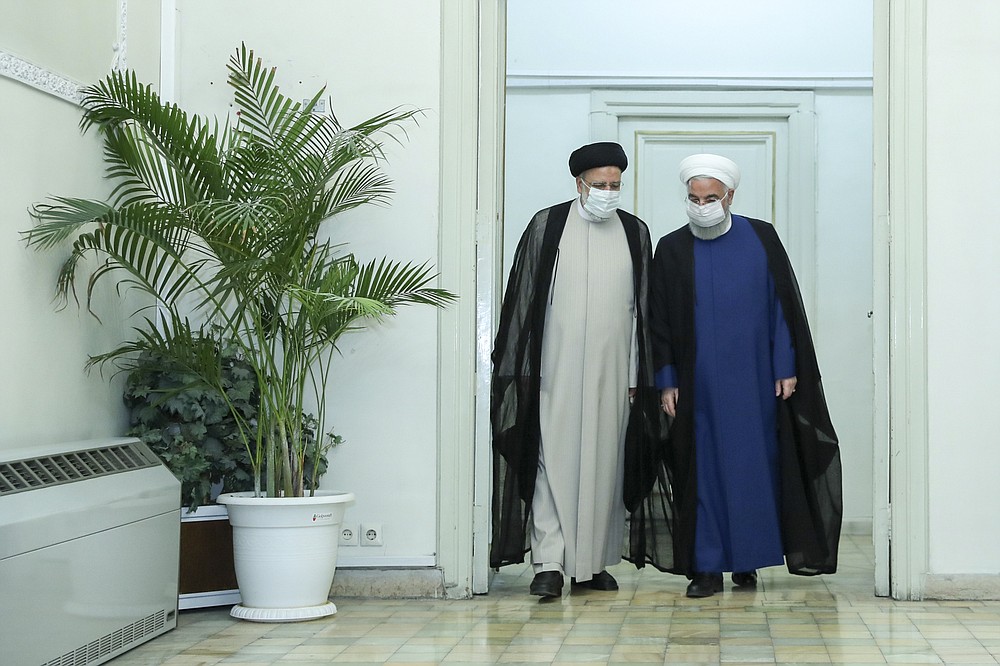 In this photo released by the official website of the office of the Iranian Presidency, President Hassan Rouhani, right, and President-elect Ebrahim Raisi, who is current judiciary chief, walk during their meeting in Tehran, Iran, Saturday, June 19, 2021. Iran's hard-line judiciary chief won the country's presidential election in a landslide victory Saturday, propelling the supreme leader's protege into Tehran's highest civilian position in a vote that appeared to see the lowest turnout in the Islamic Republic's history. (Iranian Presidency Office via AP) 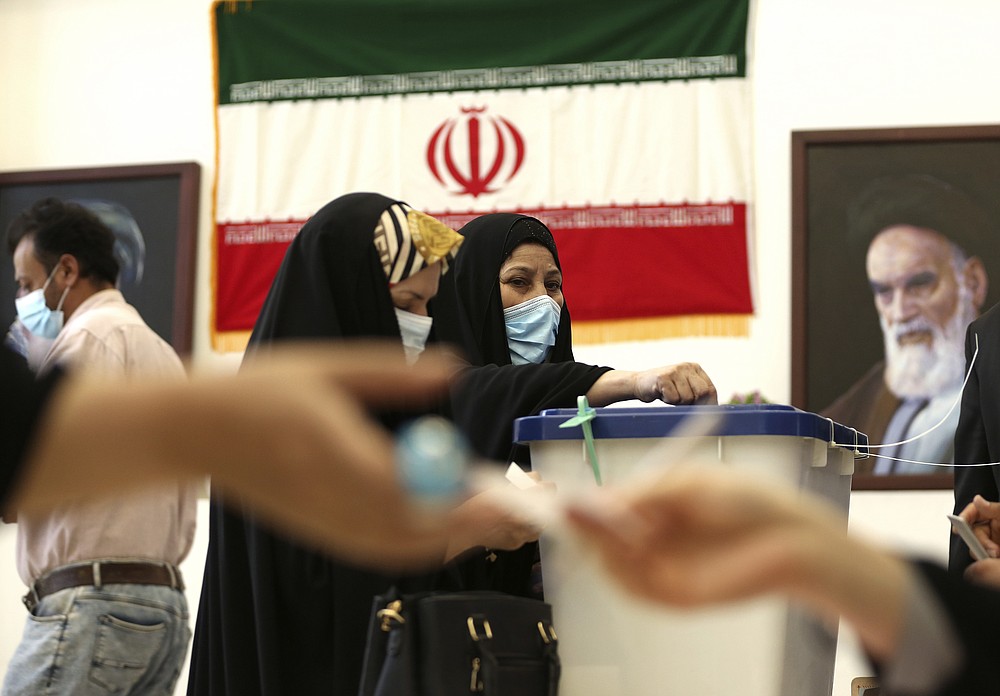 An Iranian woman casts her vote during the presidential election at a polling station inside the Iranian consulate in Karbala, Iraq, Friday, June 18, 2021. Iran began voting Friday in a presidential election tipped in the favor of a hard-line protege of Supreme Leader Ayatollah Ali Khamenei, fueling public apathy and sparking calls for a boycott in the Islamic Republic. (AP Photo/Hadi Mizban) 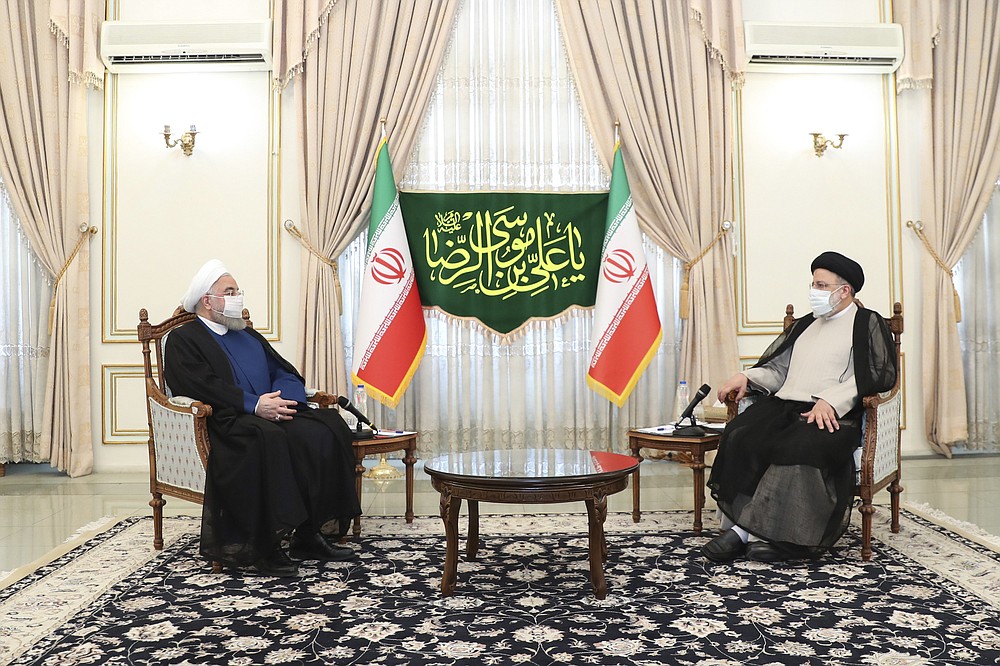 In this photo released by the official website of the office of the Iranian Presidency, President Hassan Rouhani, left, and President-elect Ebrahim Raisi, who is current judiciary chief, talk during their meeting in Tehran, Iran, Saturday, June 19, 2021. Iran's hard-line judiciary chief won the country's presidential election in a landslide victory Saturday, propelling the supreme leader's protege into Tehran's highest civilian position in a vote that appeared to see the lowest turnout in the Islamic Republic's history. (Iranian Presidency Office via AP) 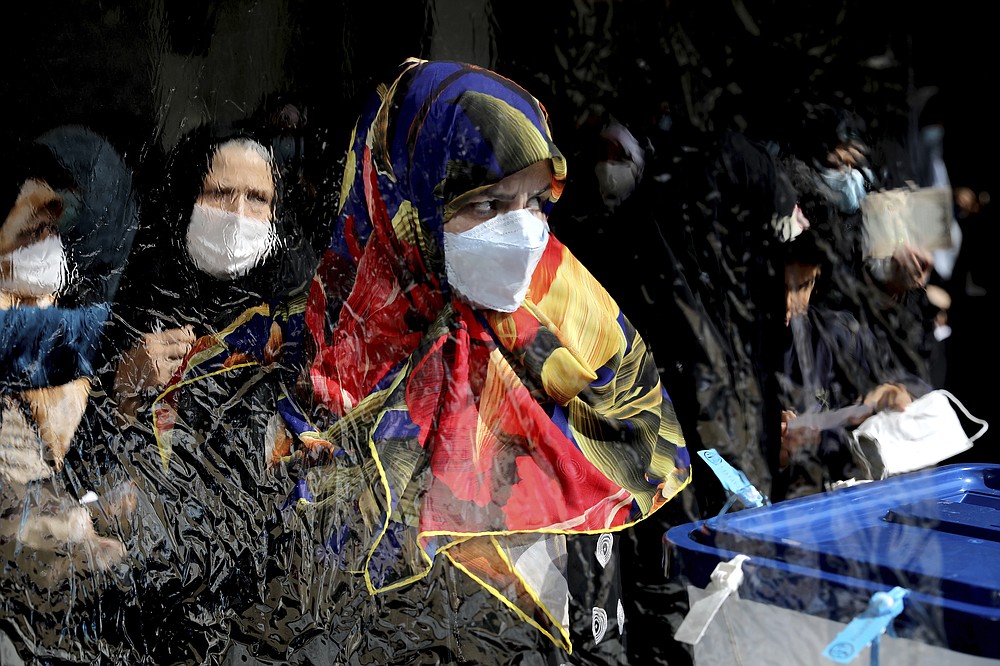 Voters register to cast their vote during the presidential election at a polling station in Tehran, Iran, Friday, June 18, 2021. Iran began voting Friday in a presidential election tipped in the favor of a hard-line protege of Supreme Leader Ayatollah Ali Khamenei, fueling public apathy and sparking calls for a boycott in the Islamic Republic. (AP Photo/Ebrahim Noroozi)