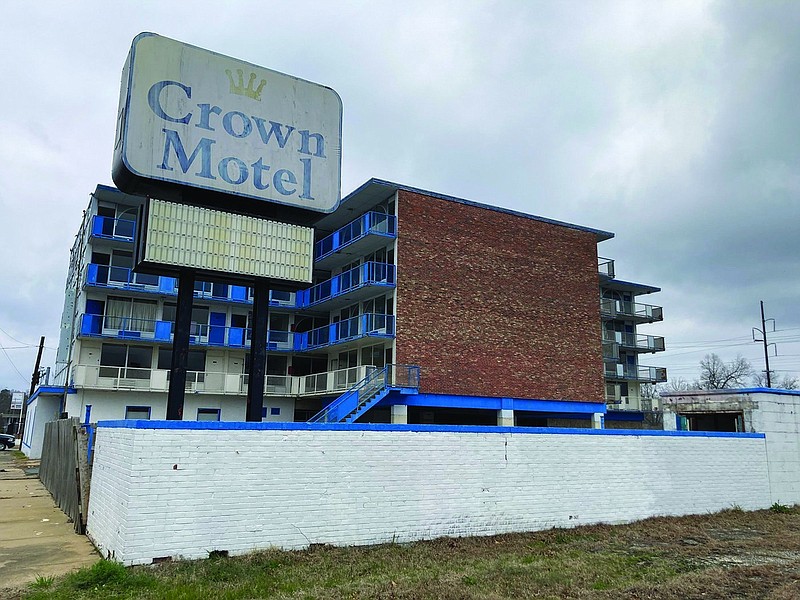 An investment group has shown interest in the old Crown Motel at Fifth Avenue and Walnut Street, submitting a proposal to convert the 72-unit structure into 35-40 apartment units. (Pine Bluff Commercial/Byron Tate)

A group of investors is interested in working within the city's vision to revitalize Pine Bluff, with a proposal to transform the Crown Motel at 321 W. Fifth Ave. into housing.

According to Urban Renewal Agency Director Maurice Taggart, during last week's Urban Renewal Board meeting, Veteran Pride Investment Group (VPIG) -- consisting of full-time real estate investor and founder of VPIG Colby Bowers and his partner Jesse Richardson, both of Colorado -- submitted a site renovation plan outlining the Crown Motel's interior and exterior along with the basis of the business execution strategy.

"They presented this preliminary proposal to us," said Taggart, who added that the group was not asking for anything from the city. "They've done this in California and Arizona where they transform these dilapidated hotels into trendy apartments."

Veteran Pride Investment Group plans are to convert the 72-unit motel into an approximately 35- to 40-unit apartment complex consisting of studio, one-bedroom and two-bedroom pet-friendly apartments.

The rental rate average will be $550, they said.

There will be an interior residents area, outdoor gathering space, social areas, barbecue stations and a fenced-in dog park.

The plan also includes an average of between one-and-a-half and two parking spaces per unit for residents and guests.

The exterior landscape would be updated and fall in line with the city's renewal project, meaning the area will complement the city and demonstrate the beauty that the area has to offer.

A proposed site plan concept suggested that vehicle access to the property be reduced to a maximum of two access points to decrease traffic congestion and increase tenant/pedestrian safety.

The access points would be on South Walnut Street and West Fifth Avenue.

The investment group said it will work with an architectural team to ensure that the building's form and materials reflect the character of a contemporary building in addition to meeting the design intent of the Pine Bluff design guidelines.

As a for-rent community, the property owner would manage all common areas and would provide garbage, recycling and dog-waste bins.

VPIG's goal is to set aside up to 10% of the apartment units for Housing and Urban Development participants and Section 8 tenants, who receive assistance from the government for their housing expenses.

According to the comprehensive plan, the projects can be broken down into three phases: acquisition/transfer of property to VPIG; execution of the construction and renovation; and leasing the apartments to a minimum of 80% capacity.

After the design and final approval from the city, the estimated start date could be as early as January 2022 with completion of renovation and leasing by January 2024.

To complete the project, VPIG has budgeted up to $1.5 million for renovations with plans to source labor, materials, talent and lending through the Pine Bluff community for the project.

"This will provide a variety of work opportunities for the people of Pine Bluff and start providing cash flow into the community before the apartments are complete," said VPIG officials in their comprehensive plan.

Taggart said he did receive confirmation from two local banks that the investment group had reached out with a very detailed and in-depth conversation.

"VPIG is confident in its ability to renovate and convert the Crown Motel into a successful and value-added apartment complex," said VPIG officials. "The final apartment community will provide a safe and contemporary location for individuals to live in the Pine Bluff Downtown area, as well as establish housing that is in line with the city's downtown renewal vision."

Though the deal has not been finalized, Urban Renewal board members are enthusiastic about about the possibilities.

"It excites me there's a chance we can take that old hotel that we were thinking the best thing to do was tear it down which was going to cost us a lot of money," said Urban Renewal Agency President Jimmy Dill. "Now there's an opportunity to make it into a functioning property. I think we ought to pursue it and see what they've got to say."