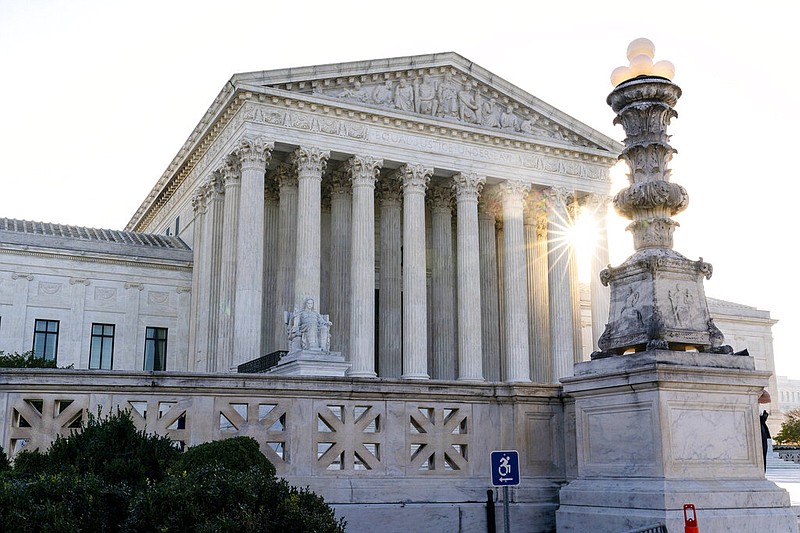 The sun rises behind the U.S. Supreme Court in Washington in this Nov. 10, 2020, file photo. (AP/Alex Brandon)

For decades, socially conservative lawmakers in states across the country passed sweeping abortion restrictions only to see them struck down by federal judges.

While unenforced, these measures remain on the books in Arkansas and elsewhere.

Now, with the U.S. Supreme Court considering the constitutionality of Mississippi's 15-week ban, Republican-leaning states are dusting off these long-dormant laws -- and they're passing new ones -- so they'll be ready if the justices allow additional limits.

"Red states like Arkansas are trying to force the court's hand by passing statutes that cannot be reconciled with Roe [v. Wade] in any colorable way," said Josh Silverstein, a professor at the William H. Bowen School of Law in Little Rock.

Now they hope to erase it entirely.

Like several other states, it has tried multiple times to make the deadline earlier, only to lose in the courts.

In 2013, Arkansas passed the nation's first fetal heartbeat law, maintaining that abortion should be outlawed once a heartbeat can be detected.

Since then, at least a dozen other states have followed suit.

Then-Gov. Mike Beebe, a Democrat, attempted to stop the measure, but his veto was overridden by the Legislature.

A federal district judge eventually struck down the measure, saying it was unconstitutional.

An abortion ban at 18 weeks, signed into law in 2019, was also invalidated by the courts.

This year, the state passed an outright ban on the procedure, providing an exception for medical emergencies.

The American Civil Liberties Union is seeking a preliminary injunction to block the law, which is scheduled to take effect July 28.

Arkansas is also one of the nearly two dozen states that have restricted abortion on the grounds that it inflicts pain on fetuses.

The National Right to Life Committee, which describes itself as "the nation's oldest and largest pro-life organization," drafted the model legislation -- the Pain-Capable Unborn Child Protection Act -- and has labeled the bill its top legislative priority.

Nebraska was the first to adopt it, making it law in 2010. Arkansas followed, three years later.

"The people of Arkansas want to protect their children, and they should be commended for it," said David O'Steen, the group's executive director.

In Roe v. Wade, the Supreme Court said women have a constitutional right to obtain an abortion, at least early in a pregnancy.

The 7-2 ruling invalidated abortion laws in states from coast to coast.

The ruling was controversial 48 years ago. It remains divisive today.

"Is Roe likely to be pruned or dialed back? I think absolutely. I believe it will be," said Jerry Cox, president of the Arkansas Family Council, which opposes legalized abortion.

Elizabeth Nash, a state policy analyst with the pro-choice Guttmacher Institute, said both sides are watching the Mississippi case.

"It does sound like, by the court taking this case, that abortion rights are in jeopardy," she said.

"Given the makeup of the Supreme Court -- it is solidly anti-abortion," there is a real possibility "that there will be some weakening of abortion rights," she said.

In statehouse after statehouse, anti-abortion lawmakers are attempting to erect barriers, she said.

"We just keep seeing new efforts. Pretty much every year," she said. "State Legislatures, like Arkansas', [are] looking to push the envelope on how they can restrict abortion."

"That original decision was so shaky, so lacking in any real constitutional basis, that from Day 1, they had reason to be concerned," he said.

In Roe, the court said women have a constitutional right to privacy that protects their ability to terminate a pregnancy in its early stages.

While the U.S. Constitution does not explicitly mention "privacy" or "abortion," the court had previously stated, in striking down an anti-contraception law in 1965, that privacy rights were implicit in the document.

In the 1965 case, Griswold v. Connecticut, Justice William O. Douglas wrote that previous cases "suggest that specific guarantees in the Bill of Rights have penumbras, formed by emanations from those guarantees that help give them life and substance. Various guarantees create zones of privacy."

(The Oxford Dictionary defines penumbra as "the partially shaded outer region of the shadow cast by an opaque object.")

The 7-2 decision, handed down in 1965, contained a flurry of concurring and dissenting opinions.

Two dissenters denied that the U.S. Constitution contained a "right to privacy."

Roe challenged a Texas law, which prohibited abortion except to save the life of the mother.

A federal district judge struck down the ban, saying it violated the Ninth Amendment, which declares, "The enumeration in the Constitution, of certain rights, shall not be construed to deny or disparage others retained by the people."

In Roe, the Supreme Court pointed to a provision in the 14th Amendment as the basis for the right to privacy.

Passed shortly after the end of the Civil War to protect the rights of newly freed slaves, the due process clause states that no state shall "deprive any person of life, liberty, or property, without due process of law."

Once the right to abortion had been established, the majority of the nine-member Supreme Court divided pregnancy into three three-month stages.

"For the stage prior to approximately the end of the first trimester, the abortion decision and its effectuation must be left to the medical judgment of the pregnant woman's attending physician," the court said.

"For the stage subsequent to approximately the end of the first trimester, the State, in promoting its interest in the health of the mother, may, if it chooses, regulate the abortion procedure in ways that are reasonably related to maternal health," the opinions stated.

"For the stage subsequent to viability, the State in promoting its interest in the potentiality of human life may, if it chooses, regulate, and even proscribe, abortion except where it is necessary, in appropriate medical judgment, for the preservation of the life or health of the mother," the justices wrote.

In 1976, Congress passed the Hyde amendment, named after its author, Republican U.S. Rep. Henry Hyde of Illinois. It banned Medicaid funding for abortion, except in cases of rape, incest or to protect the woman's life.

(As a U.S. senator, Joe Biden supported the provision. As a 2020 presidential candidate, he opposed it. His 2021 budget, unveiled in May, seeks to eliminate it).

State lawmakers, over the years, have successfully used their regulatory powers to make abortion less accessible.

In a 1992 ruling, Planned Parenthood v. Casey, the U.S. Supreme Court ruled 5-4 that "the essential holding of Roe v. Wade should be retained and once again reaffirmed."

But a majority upheld a variety of Pennsylvania restrictions, including a waiting period, pre-abortion counseling services and parental consent when a minor seeks to end a pregnancy.

Rather than subjecting state abortions to "strict scrutiny," the court said restrictions are permissible as long as they do not place an "undue burden" on those seeking the procedure.

In the three decades that have followed, Arkansas and other states have repeatedly passed measures that make abortion less accessible and less rapidly available.

Arkansas and 11 other states have also passed trigger laws, ratcheting up abortion restrictions should Roe be overturned.

In Texas, Gov. Greg Abbott signed a law Wednesday that would take effect 30 days in the event the Supreme Court overrules Roe, "thereby allowing the states of the United States to prohibit abortion."

A similar Arkansas statute, signed into law two years ago, would "abolish abortion in Arkansas."

"If the central ruling of Roe v. Wade is overturned, Arkansas law (Act 180 of 2019) would be effective, which prohibits an abortion except to save the life of a pregnant woman in a medical emergency," said Stephanie Sharp, a spokeswoman for Attorney General Leslie Rutledge.

Other states, anticipating that Roe will be undermined but not abandoned, have passed laws narrowing the window for a legal abortion.

Some states pick a single cutoff point. Others offer a range of options, hoping that at least one of them will meet judicial muster.

When the state Legislature was in Democratic hands, the Capitol wasn't a welcoming place, said Rose Mimms, executive director of Arkansas Right to Life.

"Time and again we were beating our heads up against a brick wall, going before the Senate committees and the House committees, trying to get pro-life legislation passed. It was just doors slammed in our face every time," Mimms said.

After Republicans took control of the House and Senate in 2012, things changed, she said.

The Guttmacher Institute's Nash also views that election as a turning point.

"They would take full advantage of any weakening of abortion rights at the federal level," she said.

Given the court's current makeup, there's a real possibility that Roe will be abandoned or significantly undermined, law professor Silverstein said.

"Lately, there's been true chipping away. This would be more like gashes," he said.

While hopeful that the court will further restriction abortion, the Family Council's Cox said it's "very unlikely" that Roe will be overturned entirely.

"I see nothing in the future that would indicate that there's going to be this final blow, and Roe just falls like a tree that's been cut down," he said. "I think it's gonna be more like the tree that gets pruned."

It's time, Rapert said, for the court to abandon Roe entirely.

"The Supreme Court has a duty to consider and take up cases that challenge its existing precedent when there is a crime against humanity and there is a moral outcry from the people," he said.

If Roe is eventually overturned and abortion is no longer a constitutionally protected right, the nation would be left with a "patchwork" of state-by-state laws, said Holly Dickson, executive director of the ACLU of Arkansas.

"I think most people agree and understand that it won't be the end of abortion. It would be the end of safe, legal, accessible abortion in some places, including Arkansas," she said.