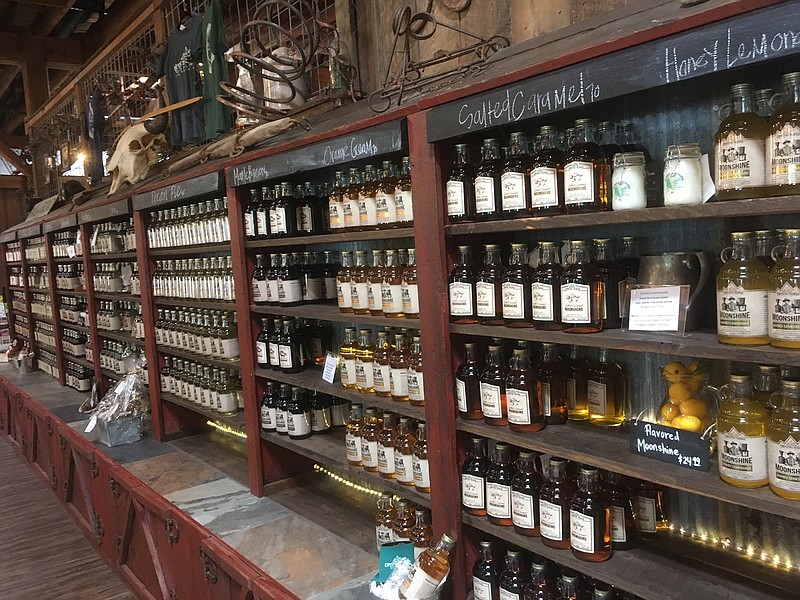 Bottles of moonshine await at Hot Springs’ Crystal Ridge Distillery. Over the past decade or so, there have been a whole lot of “legal” moonshines put into the marketplace. (Arkansas Democrat-Gazette/Philip Martin)

We never knew the particulars of how Dave procured the cherryshine and other unbranded Mason jars filled with contraband elixir that sometimes made their way to us, but we're certainly going to miss him more than the hooch.

Because we've made our position clear on moonshine before. We're not against it, but other things being equal, we prefer alcohol that sits around in wooden barrels for a number of years before we drink it. But that's just us.

"Legal moonshine" is an oxymoron. If you're buying it and they're ringing up tax, it's technically not "moonshine." Moonshine is by definition unregulated, untaxed and illegal — and un-aged.

Which leads us into a semantic swamp: There's no legal requirement for whiskey to be aged, yet it traditionally has been. By our lights, the clear stuff in the bottle you've picked up at the liquor store isn't whiskey but a kind of pre-whiskey. Moonshine is to whiskey what a hunk of marble is to Michelangelo's David. Anything labeled "Moonshine Whiskey" is strictly neither. 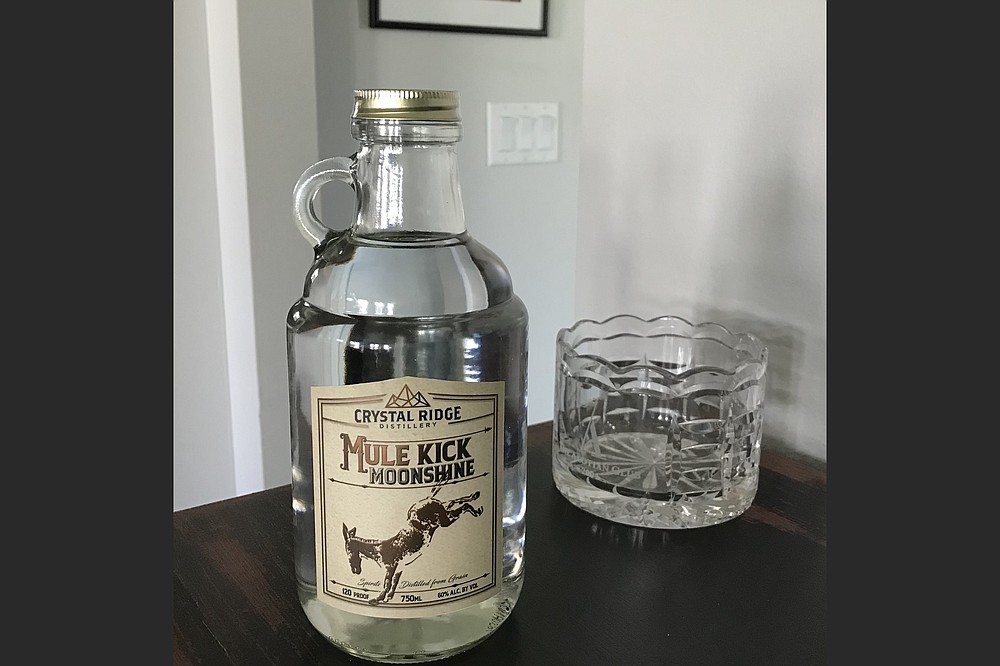 That hasn't stopped them from becoming fashionable. Over the past decade or so, there have been a whole lot of "legal" moonshines put into the marketplace. Some are better than others, and almost all of them are improved by the addition of some flavoring.

That's not to say they all taste the same (some are jarringly neutral, others flirt with agave, and some have an aromatic, almost fruity edge) or that they don't have a certain utility. Most of the moonshines I've tried would serve as an adequate vodka substitute.

In our personal bar you'll often find a bottle of Rock Town's Arkansas Lightning, along with its Apple Pie variation; in the refrigerator we used to keep some Ole Smoky Tennessee Cherries (maraschino cherries soaked in Ole Smoky moonshine), but these days we soak cherries in some of Uncle Dave's cherryshine.

While there are concerns of quality and design, mostly what differentiates one moonshine from the other is the sort of brand story that the marketing team can put together. But, as we have explored on and off in this column over the past 20 years or so, that's also what mainly differentiates Johnny Walker Blue from Macallan 25 and Hibiki 21 Years, too.

While there very well may be some distinct differences in the products' flavor profiles, that nuance is going to be lost on even the best of us after a drink or two. A lot of what we're buying when we're buying alcoholic beverages is the romance of a certain product. (If you believe differently, we're not going to fistfight you, but somebody is buying Proper No. 12 and Jagermeister.) 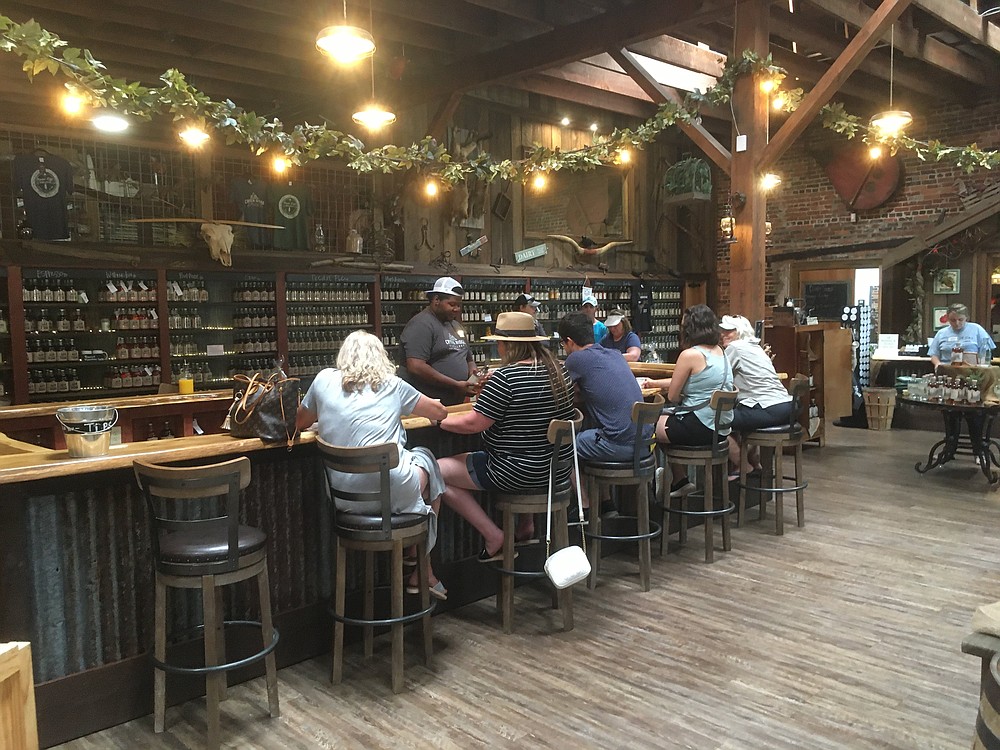 And Crystal Ridge Distillery, a relatively new shop in Hot Springs that, for the moment, is focusing on producing moonshine, has a fascinating brand story.

It's positioned to take advantage of Hot Springs' romantic past as an "open city" wherein gamblers, mobsters, Babe Ruth and other high- lifers could feel free to carouse. After Leo McLaughlin was elected mayor in 1926 he went about fulfilling his campaign promise to allow Hot Springs gambling dens — which had existed in the city for years — to run unhassled by civic authority. This laxity extended to those working in the adjacent illegal industries of prostitution and bootlegging, as long as they paid for the privilege.

But not everyone did; in 1925 there were nearly 1,300 arrests for liquor laws violations. That year, local and federal law enforcement officers destroyed 84 stills and poured out 2,000 gallons of illegal whiskey in Garland County.

We can assume that what was confiscated was but a drop in the bucket of the illegal whiskey trade. After the ratification of the constitutional amendment instituting national Prohibition in 1919, bootlegging increased exponentially all around the country. Organized crime saw it as an opportunity for growth.

Some farmers saw it as a necessary means to provide for their families, even after Prohibition was repealed in 1933. Corn was worth a lot more sold by the gallon than by the bushel. 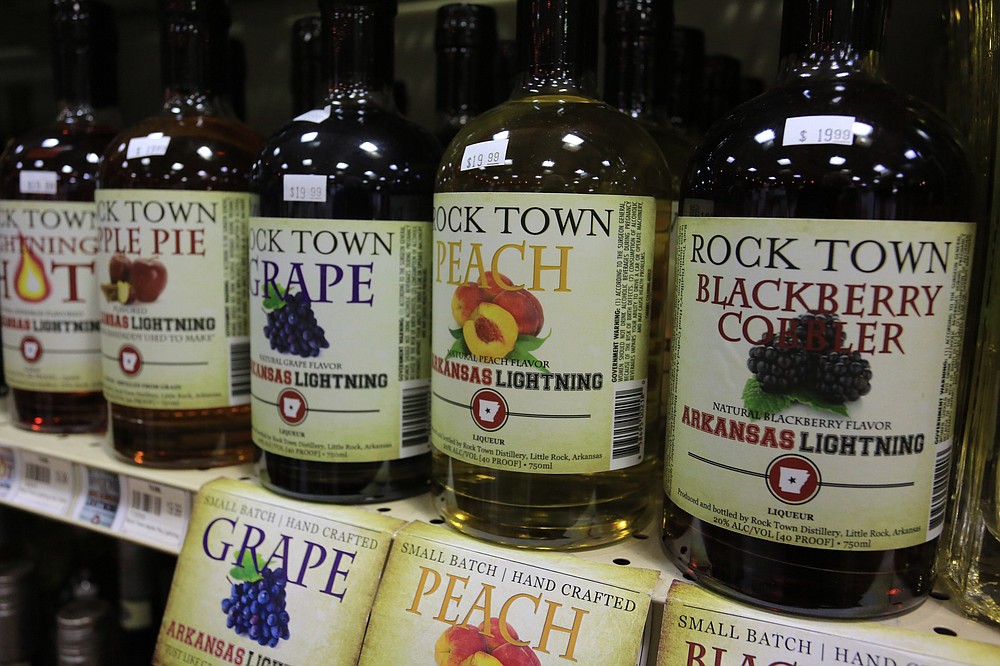 Al Capone first came to Hot Springs in the early 1920s with his then-boss Johnny Torrio. It is said that Capone arranged for the flagging Belvedere Dairy Farm, located next to the Belvedere Country Club on Arkansas 5, to be converted into a moonshine distillery. Capone had the product bottled in five-gallon water bottles, bearing the logo of Mountain Valley Spring Water (some versions say the label read "Mountain Valley Water") and shipped them north by rail.

At the other end — in Chicago, St. Louis and Kansas City — Capone's people could distinguish the alcohol from the genuine water because the labels on the real water bottles were affixed upside down (so that they could be easily read when flipped over in a water cooler) while Capone's labels were right side up.

Whether it's strictly true or not, it makes a good story and a convenient marketing peg for Crystal Ridge, which is specializing in making 14 varieties of moonshine. To take advantage of the city's tourist trade, they've created a innovative visitor-friendly space, offering tours of their distillery along with a large open retail area where T-shirts, sunglasses and other souvenirs can be bought along with more potent products.

There is a corner with games for families, a couple of bars (one for tasting, the other for more serious pursuits) and an event venue that can hold hundreds. It's all under one roof in a 14,400-square-foot building at 455 Broadway, where the street intersects West Grand Avenue.

Proprietors Danny and Mary Bradley, both of whom grew up in the area, opened Crystal Ridge in December 2019, after renovating the property known as the Old Country Store building. Part of their attraction to the space stemmed from its history — it had been around in Prohibition. It was a relic from the days of Capone, "Lucky" Luciano and Bugs Moran.

Who knows what the building might have gotten up to in those days? When they pulled up the floorboards, they found dozens of glass bottles. Might it have served as a moonshine warehouse? Sure.

It's something that's worth mentioning on the tour. And so tour guide (and bartender and reputed Photoshop wiz) Tory Carrigan does, pointing out that many of the bottles unearthed are now displayed around the distillery. 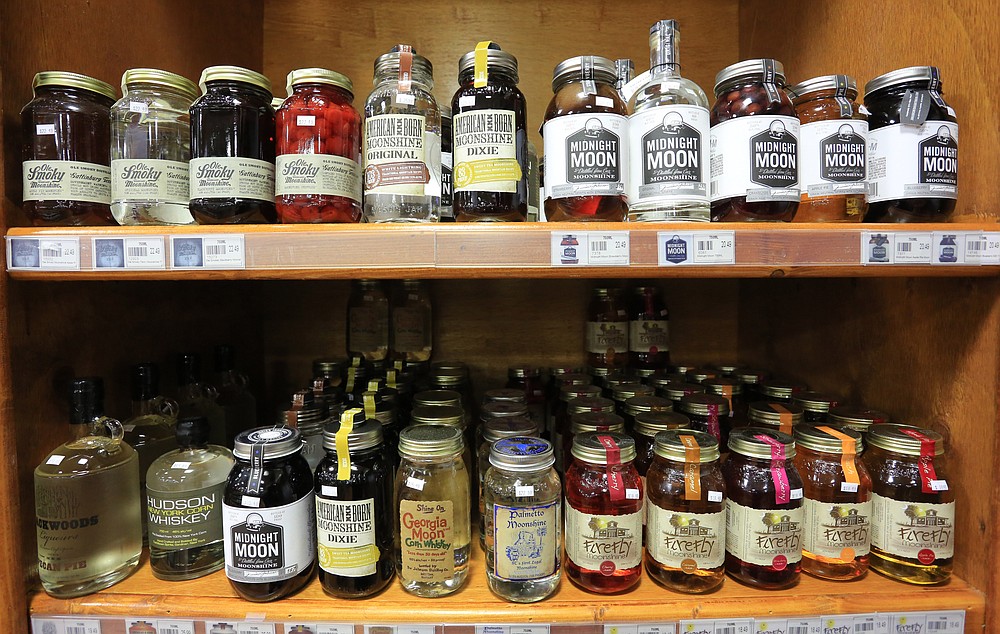 As you might imagine, Crystal Ridge had an interesting first year. Covid-19 shut down tourism and a comfort food restaurant it initially included in its business plan. No tours, no events. At least, Danny Bradley says, it kept them from growing too fast. They got by selling moonshine and hand sanitizer.

While the flavored varieties are unsurprisingly very drinkable — the honey lemonade is, in particular, dangerously smooth, with only the slightest tinge of an alcoholic after-burn — the clears are also softened by the introduction of sorghum into the mash bill.

Crystal Ridge is again open — except for the restaurant, which may or may not return in some incarnation — and preparing to enter the hot RTD (ready to drink) canned cocktail market. Part of the reasoning is that while you can't take a glass container on the lakes and waterways surrounding Hot Springs, canned cocktails are allowed. The distillery hopes to have three flavors of vodka — blueberry, raspberry cream and orange — on sale by July 1. (These RTDs are expected to run about 18 proof, which is a little lighter than wine but more potent than most canned beers.)

It's also working on developing canned versions of mojitos, margaritas, cosmopolitans, daiquiris and other onsite-developed specialty cocktails. For now, it is "importing" — slapping its own labels on — a couple of bourbons, or trying to, since hoarders have made that market difficult. Eventually it intends to produce its own.

Bradley says they're also working on getting their products — which for now are only available at the distillery — into local liquor stores.

"The Legislature recently passed a law to allow liquor manufacturers in the state to self-distribute," he says. "This will help us get in stores and restaurants around the state."

Until then, Crystal Ridge Distillery is definitely worth a drop-in during any Hot Springs day trip. And it's open on Sundays.