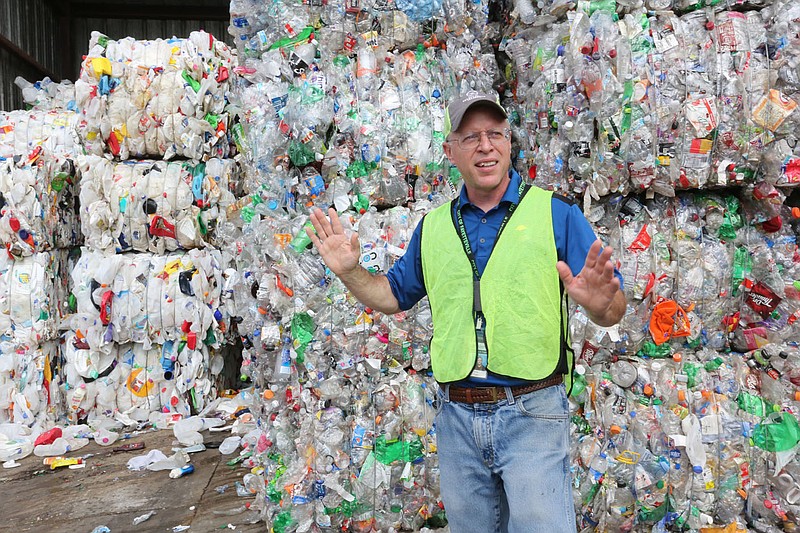 A person who places aluminum cans, plastic jugs and other approved materials for curbside pickup or who takes them to a local dropoff location is recycling.

If the person goes out for a burger and fries, and receives napkins made from recycled paper, he's part of the circular economy.

The Northwest Arkansas Council hopes people will do more of both.

The council worked with the Sustainability Consortium for a year studying recycling in the region to develop recommendations to keep waste out of the landfill. The Walmart Foundation paid for the study, which included Benton, Washington and Madison counties.

The Sustainability Consortium is a global organization. The Northwest Arkansas Council is an economic development organization collaborating with cities, schools and nonprofit groups on a number of issues to benefit the region.

The study was released last fall with recommendations that included having a series of stakeholder meetings to get the cities, counties, solid waste districts, businesses, community organizations and others interested in recycling on board the project.

The council hired Dan Holtmeyer, a former journalist, in May to coordinate the effort, another of the study's recommendations. Holtmeyer said newcomers to the area have told the council that recycling services are an important core service of local government and should be simple and easy to use.

Building a circular recycling economy could create new jobs and make use of materials generated and then recycled in Northwest Arkansas.

First, Northwest Arkansas leaders need to navigate the various ways recyclables are gathered, who gathers them and owns the materials, and what materials are accepted.

He noted fluctuations in recent years in national and international commodity markets, including China's decision to ban some recyclable materials from the U.S.

The recycling and circular economy effort in Northwest Arkansas will begin with the most established and stable commodities -- including paper, plastic, metal and glass -- and focus on ensuring the quality of the product, he said.

The study noted that the contamination rate -- the amount of nonrecyclable material mixed in with the recyclable material -- is about 28% for the region. Programs like ones in Siloam Springs and Fayetteville where the material is hand-sorted are at 5% or lower, it says.

The region now has some recycling services provided by 30 cities, two solid waste districts and hundreds of businesses, each handling recycling in its own way and often dealing with different combinations of acceptable materials.

The study stressed the need to gather more data, to provide residents information that is transparent and easily available, and to improve recycling education and awareness.

According to the study, a comprehensive overview of what is being recycled and the final disposition of those materials isn't available because of different and sometimes overlapping reporting requirements for cities and solid waste districts, which can lead to double counting.

Private haulers typically don't report to the solid waste districts or the state on their recycling activities, the study said.

Another challenge is the contracts between waste haulers and the cities they serve, the study said. Fifteen contracts were reviewed for the study.

The contracts cover what will be collected when and from where, the rate structures for residential recycling and solid waste collection, performance requirements for contractors and liability. Commercial and industrial collection isn't included in the contracts. Individual businesses are responsible for making their own arrangements for recycling with private haulers or -- in rare cases -- municipal programs.

Overall, the study concluded, the contracts were basic, provided minimal guidance for execution and gave ownership of the materials to the private haulers.

The study suggested standardizing language to address some of those issues.

Board members heard from the directors of both districts and from Holtmeyer about the services available, and endorsed the idea of the area's cities and counties and others working together on recycling.

One task is to look for areas that have adopted large-scale or regional solutions to recycling and waste reduction and that have built a circular economy. Then, local officials should consider if those systems would work in Northwest Arkansas.

Peter Nierengarten, environmental director for Fayetteville, said a regional approach to recycling and waste reduction would benefit everyone, including Fayetteville, which has its own municipal services. With the growing population in the area, people frequently live in one place and work in another, he said. Having a common approach to recycling makes it easier to know what can and can't be recycled.

Nierengarten said there are areas where a regional approach can be adopted and avoid duplication among the different local governments and their programs.

He said Fayetteville has a food waste composting facility now, the only one in the area, and that kind of program could be expanded throughout the region. He also said Northwest Arkansas could benefit from having a regional construction waste recycling facility, which would reduce the amount of construction material going to the landfill.

Nierengarten noted that the entire region is served by the Eco-Vista Landfill in Tontitown.

Wheatley said Waste Management has been contacted by the Northwest Arkansas Council about crafting a regional approach. He said the company is willing to offer information and assistance, adding that a regional approach to recycling and waste reduction will succeed or fail based on the level of cooperation among the cities and counties.

A state-of-the-art materials recovery facility takes millions of dollars worth of capital investment, Wheatley said. That's OK if the volume of material is sufficient. The issue is cooperation across the communities, he said.

"That has not happened in the past."

"We had trucks from three different haulers going through town," Crabtree said. "We had some recycling bins set up in town, but people were dumping trash in them and making a mess of the area. With the single provider contract, we were able to get curbside recycling services included in the solid waste pickup."

The Bella Vista Recycling Center operates a drop-off recycling collection site. The center has been operating as a nonprofit with no ties to city or county governments for about 45 years, according to Paul Poulides, president of the board. Poulides said he has met with Holtmeyer and is interested in learning more about the council's initiative.

"It sounds like a good plan," Poulides said. "The more people know about recycling, the better. I haven't heard anything concrete yet, but we're all for getting the word out about recycling." 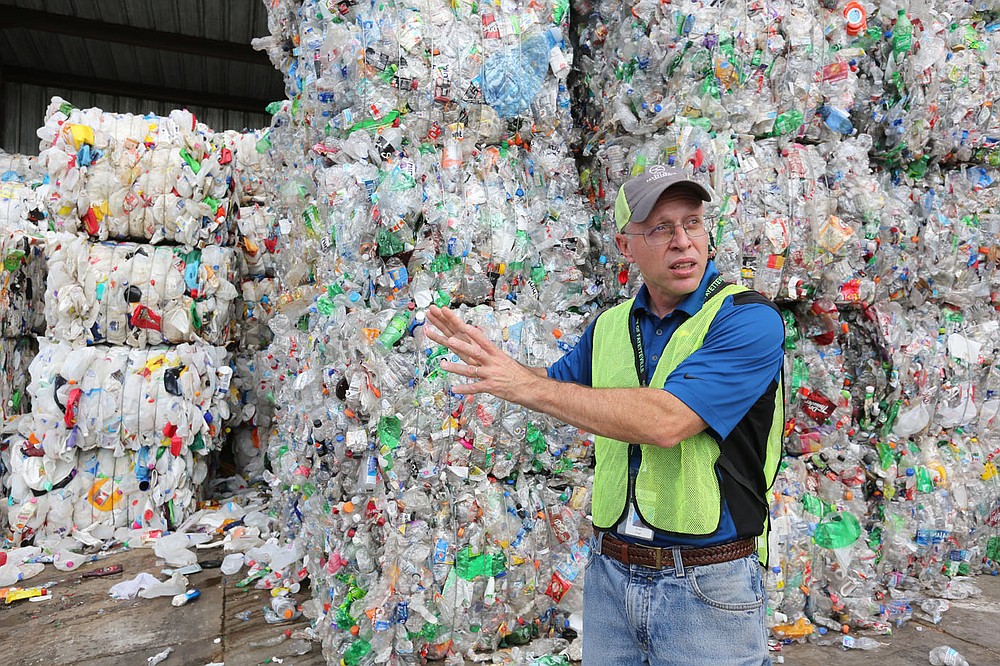 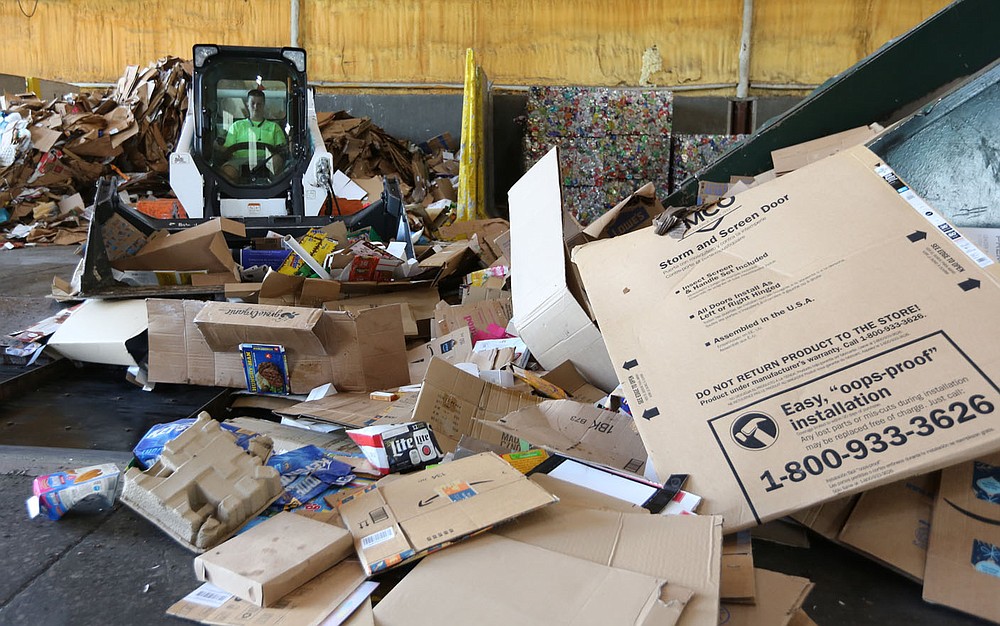 Magan (cq) Osburn, a driver, drives a Bobcat skid steer Friday, June 11, 2021, to distribute cardboard at the Material Recovery Facility for the Recycling and Trash Collection Division for the city. The Northwest Arkansas Council is proposing a circular economy that makes use of regional recycling programs to create new businesses and jobs and reduce waste. Check out nwadg.com/photos for a photo gallery. (NWA Democrat-Gazette/David Gottschalk) 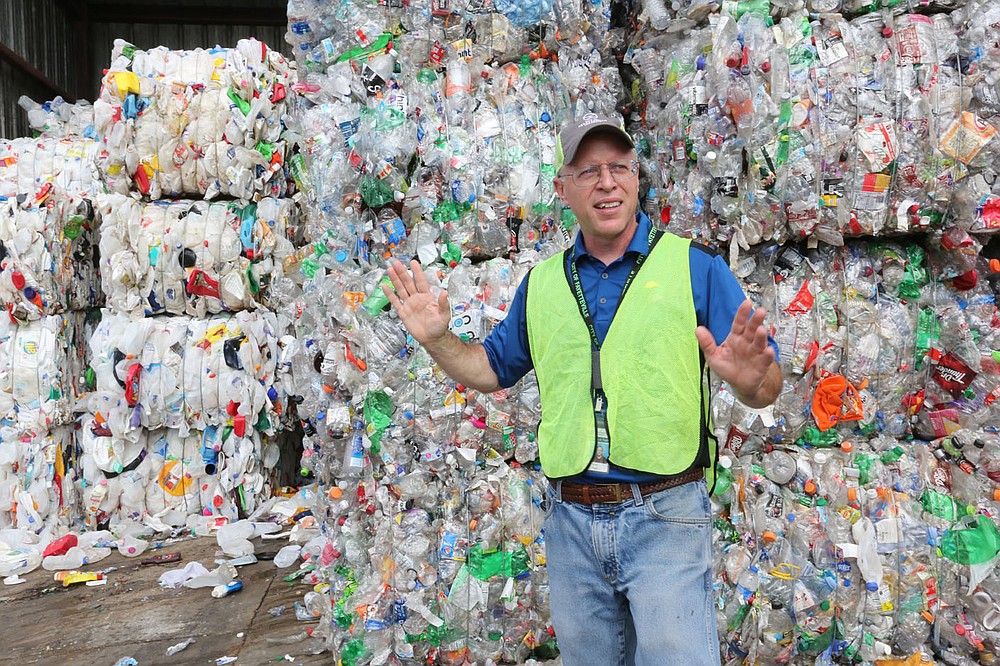 Brian Pugh, waste reduction coordinator with the city of Fayetteville, describes Friday, June 11, 2021, the demand for both number 1 and 2 plastic bottles at the Material Recovery Facility for the Recycling and Trash Collection Division for the city. The Northwest Arkansas Council is proposing a circular economy that makes use of regional recycling programs to create new businesses and jobs and reduce waste. Check out nwadg.com/photos for a photo gallery. (NWA Democrat-Gazette/David Gottschalk)
More News

The Northwest Arkansas Council released a report in 2020 on creating circular economies in Northwest Arkansas. According to the executive summary, the Council “wants to reduce waste in a cost-effective way and to establish an environment for new economic activity and technology advancements that promote waste reduction and recycling. A more circular economy creates jobs and provides ways for Northwest Arkansas communities to be more sustainable.” The full report can be found on the Council’s website at nwacouncil.org under research and reports.