Fordyce on the Cotton Belt back for 40th year after rescheduling 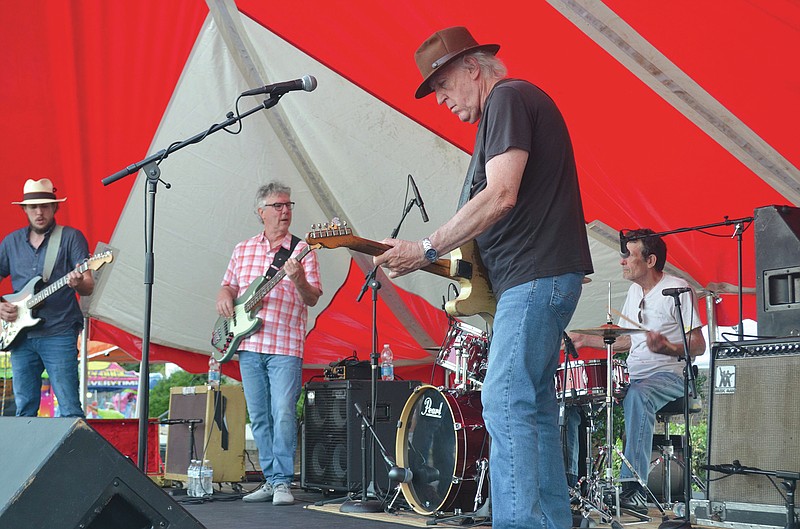 "Earl and Them" band members from left Jesse Yingling, John Davis, Earl Cate and Terry Cagle treated the audience to a long set of original and cover tunes. (Special to The Commercial/Richard Ledbetter)

Beneath blue skies and billowy clouds, the Fordyce on the Cotton Belt Festival convened on the Dallas County Court House square for the 40th time since 1980.

Thursday, Friday and Saturday saw the rescheduled event fill the streets of downtown Fordyce with folks attending the return of the family-style festival. With the annual gathering usually occurring in late April when temperatures prove more pleasant, the Summer heat only slightly affected turn out. Following a year of lockdown, the celebration was well attended by locals and out-of-town visitors alike.

Among the many offerings provided for enjoyment was Johnson Brothers Amusement with carnival rides of every kind. Arts and crafts people and a variety of food vendors were on hand hawking their wares while live music filled the outdoor stage. There was also an antique and classic car show and the largest model train display ever seen in Fordyce.

Thursday evening saw Main Street filled with activities put on by the "For Fordyce" civic group, including a poker run, live music and festival t-shirt sales in the Dallas County Museum Annex at Second and Main.

Friday's schedule began with the Dallas County Museum's annual Garden Party fundraiser from 2 p.m. until 5 p.m. hosted by Agnes Phillips in her 1904 vintage Colonial style Wynne/Phillips home on the corner of Pine and West Forth street. Front porch picking was provided by Tommy Amason, Phil Wallace and Trish West.

At 4:30 p.m., a magic show by Dean Steelman drew kids of all ages to the courthouse square just before Clarksdale, Miss., bluesman Jesse Cotton Stone kicked-off the evening's musical entertainment. In a last moment change to the lineup, Stone replaced originally scheduled Mathew Huff on the roster due to Huff's cancellation on account of vocal issues. Fayetteville Rockers Earl and Them followed at 7 p.m., treating the sizable crowd to a mix of smooth sounds in the cool of the evening until 8:30 p.m. Once the music wrapped, attendees remained on hand, milling around among vendors for another half-hour awaiting the start of a large fireworks display. Rockets lit up the night sky and could be seen from as far away as the nearby town of Thornton some 10 miles away.

Saturday began with an impressive parade winding its way through town to terminate at the Cotton Belt Railroad depot. Immediately after the parade, FBT Bank and Mortgage sponsored a baggo tournament with six teams competing for $200 in cash prizes.

As parade goers gathered on the square, Little Rock's Blackwater Bayou launched the day's music with a full hour of blues, rock and honky-tonk tunes. During a short break in the entertainment while bands changed the stage, Chicot Trace Chapter of the DAR members Melrose Bagwell and Garie Johnson shared the history of proper American flag disposal with the audience, inviting everyone to join them during the next break between groups to incinerate the collection of once proud, now tattered U.S. flags that were respectfully cut into strips beforehand.

At 1:30, the Monticello band Slick Nichol began another hour of rock, blues, soul and country. Vocalist Bianca Courson belted out a mix of genres from Aretha Franklin to Led Zeppelin, accompanied by a pair of excellent guitarists, drums, keyboard and a thumping back line.

As afternoon temperatures soared into the 90s, a stirring breeze and the shade of overhanging oaks helped keep conditions bearable for the several hundred listeners around the stage.

Beginning at 3:15 p.m., Jesse Cotton Stone reprised his show from the previous evening, performing over an hour's worth of blistering guitar solos and waling vocals backed by the steady beat of a powerful rhythm section.

As the sun slid slowly behind the treeline, granting relief from the heat of the day, attendance grew as more folks came out to enjoy the festivities. During the break from the music between 4:00-4:30 p.m., the Fordyce High School Rocket Team were welcomed and introduced by their instructor Coach Jerome Wilson.

Explaining the American Rocketry Challenge and what Fordyce STEM students had to accomplish to achieve the honor of being selected to launch their rocket at the national finals in Rockdale, Texas last Sunday, Wilson said, "Out of 615 rocket teams from 45 states, the District of Columbia and Virgin Islands, Fordyce made the cut of 100 total teams to travel to Texas for the national finals. This class is only the second group from Arkansas to make it to the finals since inception of the program in 2002."

The young rocketeers, who served as grand marshals for that day's parade, were greeted by a standing ovation and huge round of applause from proud Fordyce citizens.

Around 4:45 p.m. the gathered were treated to a special appearance by north Mississippi hill country bluesman Robert Kimbrough Sr. and his three piece Blues Connection band. Kimbrough played original songs from past CD's as well as a number of selections from his latest release. He even played the occasional Prince song in the mix for good measure.

Beginning at 7 p.m., festival headliner, Jess Hoggard from Jonesboro along with his five player band Jess and the Mess, rolled out a steady stream of electrified blues for the following hour and a half, regaling the audience with masterful keyboards, harmonica, guitar runs and guttural vocals.

Festival Director Mike Trammel said, "All in all, with the short time period we had to prepare for this year's rescheduled event, things ran very smoothly and everyone was just happy to be back together celebrating our history and heritage."

Print Headline: Fordyce on the Cotton Belt back for 40th year after rescheduling