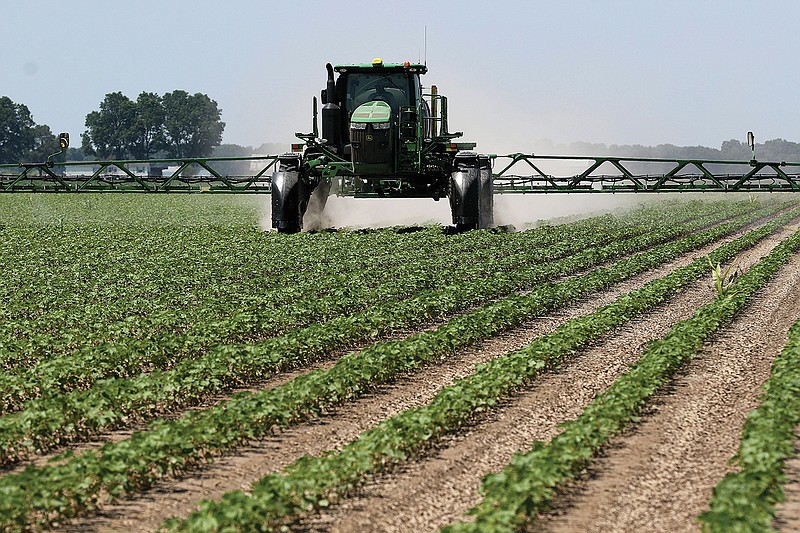 A tractor sprays insecticide on a cotton field on Friday, June 18, 2021, at Brantley Farming Company in England. (Arkansas Democrat-Gazette/Thomas Metthe)

Arkansas' use of its groundwater remains unsustainable, according to the most recent report by state officials, but they hope increased conservation incentives for individuals and public irrigation projects will help preserve the resource for future generations.

The 2020 Arkansas Groundwater Protection and Management Report, released this month by the Arkansas Natural Resources Commission, focuses on the depletion of the two most used aquifers in the state: the Mississippi River Valley Alluvial Aquifer and and the Sparta/Memphis Aquifer.

Arkansas is second in the nation in groundwater usage behind California and comprises 11% of national groundwater withdrawals, according to U.S. Geological Survey 2015 data. The Natural State was fifth in total water use. Much of the 9.3 billion gallons a day Arkansans use goes towards agriculture, the top industry in the state, according to the 2015 data.

Aquifer-wide data collected in the spring of 2020 -- before farmers began irrigating -- showed an overall increase in water levels compared with 2019 and 2015 data. The spring 2020 data comes from 555 water wells measured in the alluvial aquifer, which stretches from Ashley County in southeast Arkansas to Clay County in northeast Arkansas, and 202 measurements from the Sparta/Memphis aquifer.

Jim Battreal, geology supervisor for the Natural Resources Division of the Arkansas Department of Agriculture, said that factors like crop rotation and precipitation play a role in year-to-year fluctuations, but his team and other agencies are working to determine how much groundwater savings could be attributed to conservation efforts.

"I've been doing this 21 years. For the first half of that, there was some kind of hesitancy and worry about us as the government regulating water -- that kind of fear. Regulation is something that we are not looking at. We want to do education and conservation efforts to help conserve the resource," he said. "They're coming around. And not just that, they see the cones of depression on their farms. They see their wells going dry. They know there's an issue."

Before the coronavirus emergency, Battreal said there was a push to inform farmers about incentives to invest in water conservation practices. In 2020, 126 projects were approved through the Water Conservation Tax Incentive Program, which offers a tax credit equal to 10% statewide or 50% in a critical groundwater area of the cost to implement the practice. This was more than double the number of projects approved in any of the previous four years noted in the management report.

Economic benefits for farmers may have also led to more interest in these types of investments, said Andrew Grobmyer, executive vice president of the Agricultural Council of Arkansas.

"Anecdotally, a good number of people throughout the state, especially in those areas of critical groundwater, have had success using the program, and significantly reducing their use of groundwater by converting to utilization of surface water," he said.

Earlier this year, the General Assembly passed House Bill 1314 to amend the incentive program, increasing the credit dollar limit and expanding the areas that could qualify for the 50% credit. The new law opens eligibility from parts of 20 eastern counties in the designated critical groundwater area to also include bordering counties, effectively applying to the entire eastern half of the state.

"This is not only going to help those surrounding counties, it's going to help the critical groundwater areas, because there will be more water to run back into the aquifer and fill those cones of depression," said Rep. David Hillman, R-Almyra, the sponsor of HB1314.

Dow Brantley farms cotton, corn, rice and soybeans on about 10,500 acres near England in Lonoke County, which is the state's fourth-largest user of groundwater for irrigation. Brantley's farm began to have issues back in 2000 with a few pumps running dry in the alluvial aquifer, and his family got to work building reservoirs and tailwater recovery systems.

"Why do we have so many people using groundwater? Well, when they started 100 years ago, groundwater was cheap and easy and not very deep," he said. "As it becomes more expensive and harder to pull out of the ground, we're shifting."

Over the past 15-20 years, Brantley said, his farm has cut water use in half, and more of the water the farm does use comes from the surface. He estimates that surface water went from accounting for 20% of water use to 40% over the past two decades. Brantley used the tax credit since its inception and also learned more efficient water use methods with the help of other entities, like Ducks Unlimited and USA Rice.

"Ever day we realized there's a need to move to surface water," he said. "Our Legislature is giving us this money to use. Why not use it?"

Brantley said he thinks this is more than a farm-to-farm issue.

"I think we're on a path to sustainability for generations to come. It's going to take a lot of work and a lot of effort from all of us," he said.

The areas with the most severe groundwater declines continue to be seen in the areas of the aquifer farthest from a major surface water source like the Arkansas, White and Mississippi rivers, the 2020 report notes.

Hillman and others said that Arkansas is blessed with an abundance of surface water, but the issue is moving that water to where its needed at the proper time.

These large, long-term solutions were first authorized in the 1950s, but the Bayou Meto project didn't receive the funding it needed to begin construction until 2010. The groundbreaking for the first phase of construction of the Grand Prairie Irrigation Project was May 7.

Once finished, the Grand Prairie Irrigation Project -- in portions of Arkansas, Lonoke, Monroe and Prairie counties -- will provide water to over 245,400 acres of cropland, according to the USDA Natural Resources Conservation Service. The service has received $48 million in federal funds to be used with local funding available to construct several segments of the project and pipelines.

The Bayou Meto Irrigation Project -- stretching through parts of Lonoke, Prairie, Jefferson, Arkansas and Pulaski counties --has $28.1 million in federal funding, including $22 million for construction that has a $7.3 million local match.

Money for construction has always been the issue, said Edward Swaim, executive director at Bayou Meto Water Management District. However, with the federal and state funding now available, Swaim said the Bayou Meto Irrigation Project could get to a point in construction to start delivering water in three to five years. The project will eventually be able to serve roughly 270,000 acres of irrigated cropland once complete.

"Once we can pull the water out of the river and move it through canals, it will then go into natural streams, like the bayou ... and then that water will make it's way down," Swaim said. "There are a lot of farms along the bayous, but also a lot that aren't. So, we will also build pipelines to go to farms that are not directly on the bayous."

Brantley said he is already preparing to utilize the future surface water from the project. He has pumps set up on the Indian Bayou tributary, which will be one of the canals delivering water, and he has been building reservoirs in prime locations.

"We'll be able to pick that water up and store it," he said.

Swaim said the irrigation projects won't end groundwater use but will be a supplement and a solution to go alongside conservation.

"We're optimistic that once we get this in place the aquifer will recover and, then if we can hold it at about 50% storage, it will last indefinitely," he said.