OPINION | READ TO ME: Moofy the Monster’s a literary triumph 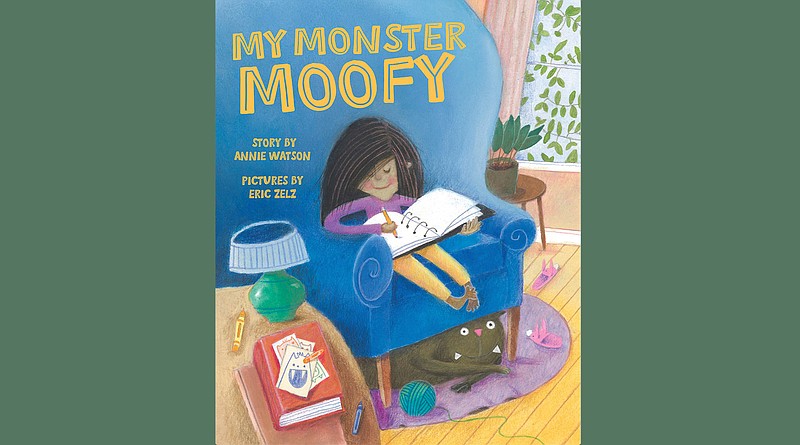 If I gave out stars, this savvy picture book would get many stars.

Besides being a humorously illustrated mystery about what sort of monster Moofy might be, it illustrates 17 literary devices — figures of speech — from simile and metaphor to paradox and pun.

It's effectively a junior high grammar cheat sheet translated for first-graders and really quite deftly done.

We meet a girl who says there is a monster living under her bed. "He changes like a chameleon," she says. "He can be motionless, like a rock with a tail, or he can strike with blinding speed, like a lightning bolt with claws."

A narrow flag on the page says: "Similes using 'like.'"

Turn the page to learn that the monster is named Moofy, that she owns him and that he is something else: "His ears are as pointy as tortilla chips. His tongue is as pink as bubblegum, and his teeth are as sharp as swords." A narrow flag on this spread says, "Similes using 'as.'"

So far so simple. But every two-page spread illustrates another figure of speech, and eventually there are upper elementary or even junior high concepts, such as allusion, paradox, antithesis. Antithesis!

Antithesis is presenting things in polar opposition for the purpose of intense contrast:

Moofy’s a builder of forts and a destroyer of castles.

Paradox: A statement that seems contradictory but does, in fact, makes sense:

The only thing that's the same about Moofy's many disguises is that they're all different.

If that all just sounds too hard for little kids to grasp, consider that they will figure out what sort of monster Moofy is early on, and yet the story goes on being interesting.

This is one "baby book" precocious kids might like enough to stash in the bedroom bookshelf, where they can find it for ready reference later. Much later.

Print Headline: OPINION | READ TO ME