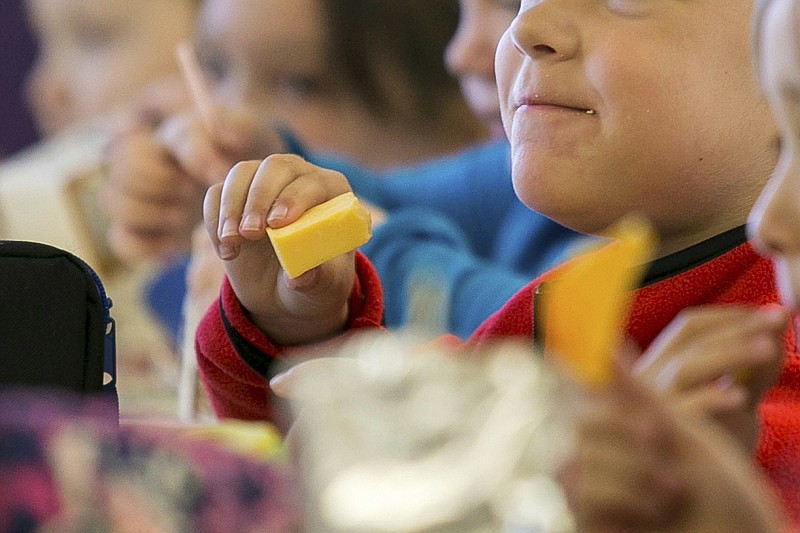 Despite rising numbers of children without health insurance and high levels of childhood poverty, Arkansas improved its national ranking by one in an annual report on childhood well-being released publicly today.

Arkansas ranked 39th out of states in the 2021 Kids Count by the Annie E. Casey Foundation, a Baltimore-based research and advocacy group. Last year, it ranked 40th.

The report is based on 2019 data and doesn't reflect outcomes from the covid-19 pandemic, which experts said has likely worsened financial instability, educational outcomes and other key factors in determining child welfare. The report is based on 16 indicators across four categories: economic well-being, education, health, and family and community.

States in the South and West represented the "lion's share" of those in the bottom 20 rankings for child well-being, according to the report. Overall, children of color tended to fare worse than white children.

"While we did go up one rank overall last year, the data tells a much different story for Black and brown children," said Maricella Garcia, race equity director for advocacy with Arkansas Advocates for Children and Families. "Children of color are faring far worse than their white counterparts. While the data does not include information from the pandemic, we know that the pandemic has a negative impact on those children in particular."

Arkansas Advocates is the state-level affiliate of the Annie E. Casey Foundation.

[INTERACTIVE MAP: Map of the United States not showing up above? Click here to see it » arkansasonline.com/621count/]

Among the indicators advocates said were most concerning was a surge in the number of Arkansas children without health insurance. That number grew from 34,000 in 2018 to 43,000 in 2019, according to the report.

That reflects national trends, although an Arkansas Advocates news release called the drop "noteworthy" because the state dropped from 23rd in 2010 to 29th in 2019.

"That is a particularly troubling trend that we saw an increase in the number of uninsured children after basically a decade of seeing the rates for uninsured children decline," said Michael Cassidy, director of policy reform and advocacy for the Annie E. Casey Foundation.

Cassidy attributed the national trend, in part, to cuts in outreach and enrollment funding as well as cuts to funding for community navigators and shorter enrollment periods. He added that a 2019 federal rule "dampened interest" for immigrant families seeking health insurance.

The 2019 Public Charge Final Rule, which is no longer in effect, set guidelines for how the government would determine whether an individual received a visa to the United States. "Public charge" means that the person is likely to become dependent on government assistance.

The implementation of Arkansas' Medicaid work requirement -- which is no longer in effect after being struck down by a federal judge in March 2019 -- also could have affected the number of uninsured children, said Loretta Alexander, health policy director at Arkansas Advocates.

The work requirement, which mandated working-age enrollees spend 80 hours per month on work or other approved activities, like education or job searching, was in place for nine months before being tossed by the courts.

While the requirement was in place, about 18,160 Arkansans lost their health insurance. Parents who lost coverage may not have re-enrolled their children, Alexander said.

In 2020, there were 448,841 children in Arkansas receiving health coverage through ARKids A or B, down from 465,013 in 2019, according to data provided by the Arkansas Department of Human Services. The department doesn't analyze why children don't have insurance. Some leaving the program may have gotten private insurance.

"DHS works to promote the availability of ARKids coverage, including through outreach with providers, advertisements and other communications with clients," said Gavin Lesnick, a Human Services Department spokesman, in a statement. "We recently launched and are continuing to upgrade Access Arkansas, an online system that streamlines the application process and makes it easier for Arkansans to apply for, renew and manage their benefits."

Under the continuous coverage provision during the federal public health emergency, "most Arkansans enrolled in Medicaid have maintained their coverage," Lesnick added.

Access to health insurance is one of the key parts of case work services provided by the nonprofit Family Promise of Pulaski County, executive director Cynthia Ramey said. Family Promise provides shelter and other services to families experiencing homelessness in Central Arkansas.

"We are seeing where a lot of families have not insured their children," Ramey said. "One of the things that we do is try to navigate that process for them. ... Navigating those waters has been one of the barriers as far as insuring their children."

"Knowing even where to start -- that's a disparity in and of itself," Love said. At commission mobile health clinics, commission members connect clients to services, including through the Department of Human Services, for health insurance.

Love added that the pandemic has shed additional light on existing disparities for people of color.

The Kids Count report also showed that more children of color were living in poverty than their white peers. In Arkansas, about 22% of all children lived in households with incomes below the poverty line. Nationally, 17% of children were in poverty.

Thirty-nine percent of Black children in the Natural State and 27% of Hispanic children live in poverty, compared with 16% of non-Hispanic whites, according to an Arkansas Advocates news release.

"There's big associations between poor health outcomes and being in poverty," said Bruno Showers, a senior policy analyst at Arkansas Advocates. "Being in poverty makes it harder for kids to do well in school. That has impacts on their lifelong earning potential."

Food banks and school districts worked to provide more meals to children who were learning remotely from home, said Patty Barker, director of the Arkansas No Kid Hungry Campaign at the Arkansas Hunger Alliance.

"More folks were going to pantries due to job losses and economic status and that uncertainty," Barker said. "The need and I think the increase in patronage of those pantries went up across all of our regional food bank areas."

Many of the people who have needed help over the past year are people who haven't needed assistance before, said Mollie Palmer, vice president of communication and engagement at the Heart of Arkansas United Way.

This group, typically made up of hourly workers, has incomes above the poverty line but still struggles to make ends meet. Such workers often don't have enough savings to handle an emergency, Palmer said.

"Sometimes crisis is 'My car broke down,' and sometimes crisis, it turns out, is a global pandemic, and people aren't prepared for that when it pops up," she added.

During the 2021 legislative session, state Sen. David Wallace, R-Leachville, introduced a bill designed to assist Arkansans who fall into this group. Senate Bill 10 would have created an earned income tax credit and assisted mostly people who earn between $25,000 and $50,000 annually, Wallace said.

The bill died in committee. Wallace said he'd like to bring back a version of the bill next session.

"It would have helped our school teachers, police officers, firemen," Wallace said. "I thought it was a really good bill."

An earned income tax credit would provide a state tax credit to families, similar to the federal statute. Creation of such a credit is one of a few policy recommendations by the Annie E. Casey Foundation and Arkansas Advocates from this year's report.

Other recommendations from the report include: making the expanded child tax credit permanent, prioritizing recovery of communities of color, expanding income support to help families care for their children, expanding Medicaid under the Affordable Care Act and increasing support to public schools.