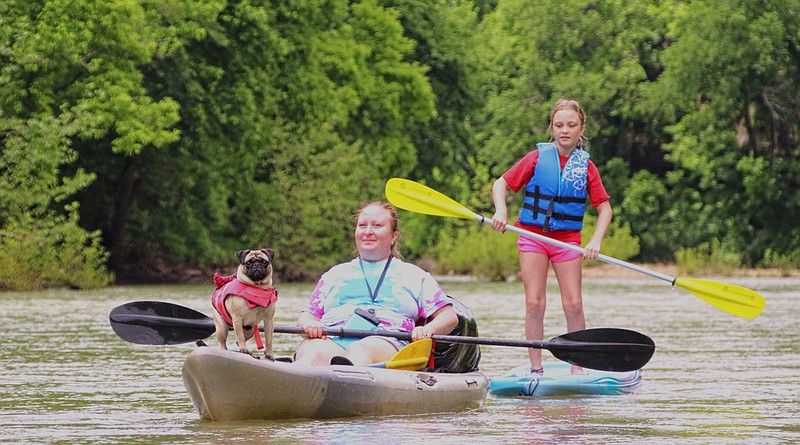 Emma the dog takes the helm as the Metcalf family paddles downstream during a three-day camping float trip May 28-30, 2021, on the lower Buffalo National River with the Arkansas Nature Lovers Meetup group. (Special to the Democrat-Gazette/Bob Robinson)

After reading the announcement on the Arkansas Nature Lovers Meetup website, I switched over to the U.S. Geological Survey's river gauge site to check the Buffalo's levels. The Ponca low water bridge gauge registered just under 4 feet, and rising.

When gauges downstream reported similarly favorable floating levels (see arkansasonline.com/621usgs), I slid back to the Meetup site and clicked the "Attend" button. What's not to like? A multiday float on the emerald green waters of the country's first National River. Sleeping under the stars on polished-smooth gravel bars. Sign me up.

Jeff Johnson, the event organizer, selected the Pruitt boat landing at river mile 52.2 as the launch location. He planned to float about 26 miles over three days, with two nights camping on the river's shore.

I knew that the drive to Pruitt, plus the two-hour shuttle to drop vehicles at the Woolum Ford takeout, would eat a large chunk of Day One. However, with the short overall mileage of the outing, there would be plenty of time for an enjoyable float and ample opportunity to hang around a campfire with friends.

Given the favorable weather forecast and prime river levels, Johnson knew the Buffalo would have plenty of visitors over the weekend. To avoid the hordes of floaters the upper river put-ins attract, he chose the less accessible Pruitt-to-Woolum section of the river for our excursion.

The upper section has more whitewater and challenging paddling, but there are natural features on this lower part of the stream that are unique to the river and to the state.

Our hardy troop of adventurers numbered nine when we eased into the steadily flowing Buffalo River. Kayaks were the watercraft of choice, including one flat bottom fishing version and an equal split of sit-inside and sit-on-tops. There wasn't a single open-boat canoe in the group.

As with any sport, there are different strokes for different folks in kayaks. The sit-inside models are warmer during cold weather excursions, with the paddler nestled within the protective walls of the craft and a watertight skirt sealing the cockpit from whitewater splashing over the bow. And if you have a reliable "combat roll" down, it offers an easy recovery should the boat capsize.

Many boaters are not comfortable with the confinement of sit-inside kayaks. They prefer the easy exit offered by a sit-on-top boat. Many of these have built-in, self-bailing "scupper holes" that allow splashed water to drain. With this style, paddlers are more likely to get wet.

Both models are considered very stable, fun and easy to use. However, as one of the members of our group discovered when encountering turbulence on our first whitewater, if the chair height is not properly adjusted, a sit-on-top kayak can be a bit tippy. In her defense, it was a rental boat, and she climbed bravely back on board to resume the float.

The Ozarks, which the Buffalo River meanders through, were created by erosion of three vast, level plateaus of sedimentary rock that were left uplifted by an ancient collision of the tectonic plate of present-day North America and plates to the south. This impact also left geologic faults in bluffs bordering the river. Shortly into our float, we passed the most visible fracture on the Buffalo, the Welch Bluff.

The downstream side of the crack continued to lift after the split, raising it another 100 feet higher than the remainder of the bluff. The scraping of rock within the fracture has rendered the opening wide and visible to river passersby.

To help preserve the area's history, this fracture, along with many bluffs and features bordering the river, were named after early residents. The namesakes for this fracture were Lawrence and Francis Welch, who lived and farmed the bend in the river during the late 1800s.

High water made navigating the waterway easy and fun, with the current flowing over submerged obstacles that boaters would normally maneuver through. These same obstructions, now underwater, spawned tall, rolling waves that tossed our kayaks around like toy boats.

The Little Buffalo River is the largest tributary on the Buffalo River. As its current joined on river right, the white-capping waves generated by merging waters made me appreciate the skirt that sealed my cockpit.

An added adventure of floating at high water levels is choosing your route around the islands created by spillover channels. As you approach these forks in the river, it is exciting to peer down a potential passage, searching for obstructions. It is also a challenge to see if you can squeeze through those narrow passages.

During spring and summer floats along the Buffalo, dense trees and underbrush block many of the beautiful bluff views visible during winter trips. The trade-off is the wall of lush vegetation, filled with assorted birds. With a slight stretch of the imagination, boaters could envision floating through the jungles of South America.

Given the late start, we intended to paddle into the evening to knock out as many miles as possible. However, a huge, beautiful gravel bar midafternoon called out to us, "Come stay with me," and we could not pass it by.

The bar was covered with colorful quartz crystal, chert and limestone pebbles polished smooth from the rolling and tumbling abrasion on their bumpy river journey.

One of the bonuses of camping on active rivers like the Buffalo is plenty of driftwood hung in the trees along the bank, handy for firewood. With tents assembled and crackling logs in the firepit, it was time to kick back in my new Big Agnes camp chair, sip an adult beverage and prepare dinner.

The conversation swirled around floating, hiking, biking and outdoor adventures. Why would anyone want to talk politics, work or other boring subjects in this beautiful natural setting? This was an opportunity to escape the so-called "real" world.

After sunset, darkness settled beyond the light of the campfire. Rick Hammerle pointed to the southern horizon.

"What in the world is that?"

Everyone turned to look. A string of shiny bright objects was trailing across the sky. Dead silence engulfed the once chatty group.

"I'm glad someone knew what it was," Hammerle cried. "I thought we were being invaded by aliens."

Deep in the Ozark Mountains, with flames of the campfire the only light pollution, we had a clear view of the dozen or more satellites lined across the lower horizon. It was an interesting sight, but we could not imagine what the now picturesque dark sky will become when the planned thousands of additional man-made mini planets litter the night.

On Day 2, the high-water levels still generated a steady current. We easily made up for the short mileage of the opening day. The second day of floating was so easy and fun that we decided to push on beyond our initial mileage goal. This would allow the group more time to explore the two incredible features we would pass on the last day of the adventure.

After hours of paddling, we found another inviting gravel bar that we claimed as home for the night.

The next morning, we arrived at the first special feature on the final day of our Buffalo River Adventure. Maneuvering our kayaks to river right, each of us had to find enough room to secure our kayak on the skinny embankment at the base of a steep bluff. Once accomplished, we began our scramble up "The Nars," aka the Narrows. 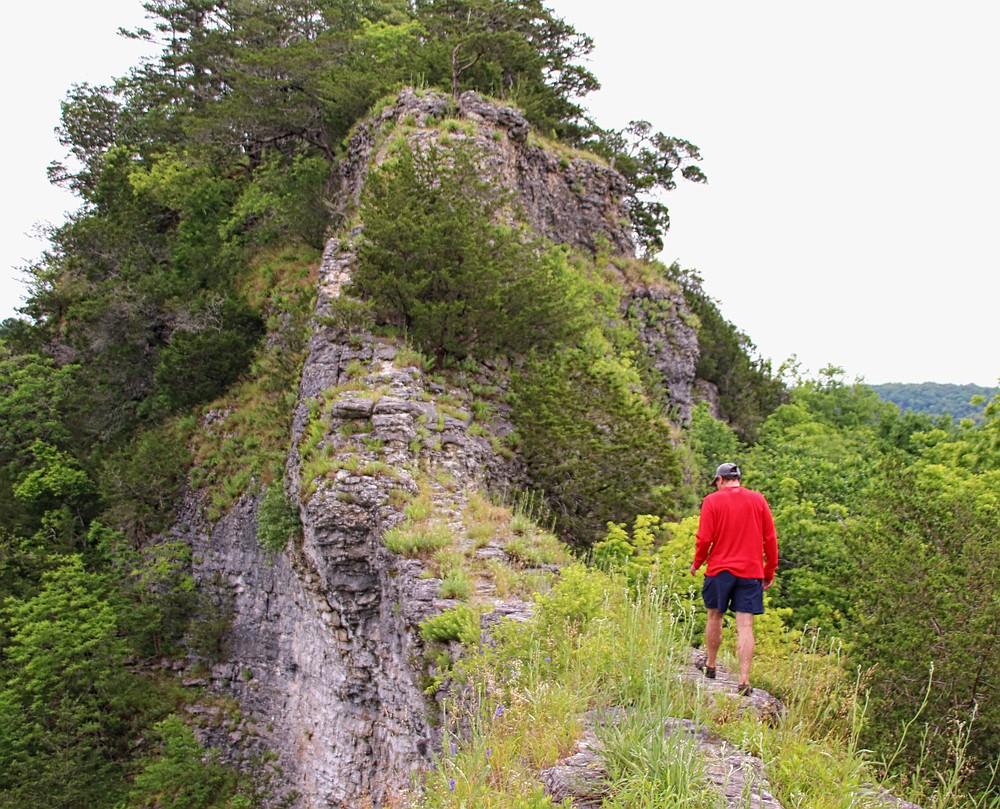 Jeff Johnson walks The Nars during a three-day camping float trip May 28-30, 2021, on the lower Buffalo National River with the Arkansas Nature Lovers Meetup group. (Special to the Democrat-Gazette/Bob Robinson)

The Nars is a narrow ridge of hard Boone Formation limestone that refused to be washed away by the swift waters of the Buffalo River on one side and Richland Creek on the opposite. However, the two waterways did eat away at the ridge until all that remains at its peak is a narrow spine of hardened chert barely three feet wide.

The summit of The Nars can be reached from the river side or the Richland Creek side (the Ozark Highlands Trail also borders the ridge on this side). The hike across the narrow ridgetop is a little intimidating; however, the view from its peak, 100 feet above the water, is spectacular.

After carving away at the bluff for centuries, Richland Creek retreated more than 1,000 feet to the east, leaving behind open fields of lush green meadows. To the west, the vantage from atop the Nars offers an extensive view up and down the scenic river. Particles of silica, calcium carbonate, iron oxides and other rock suspended in the water refract the light into different wavelengths creating the river's famous blue-green color.

We could even see downriver to our next natural wonder of the day.

After preserving the experience atop The Nars in photographs, the group returned to our boats for a short paddle to Skull Bluff. 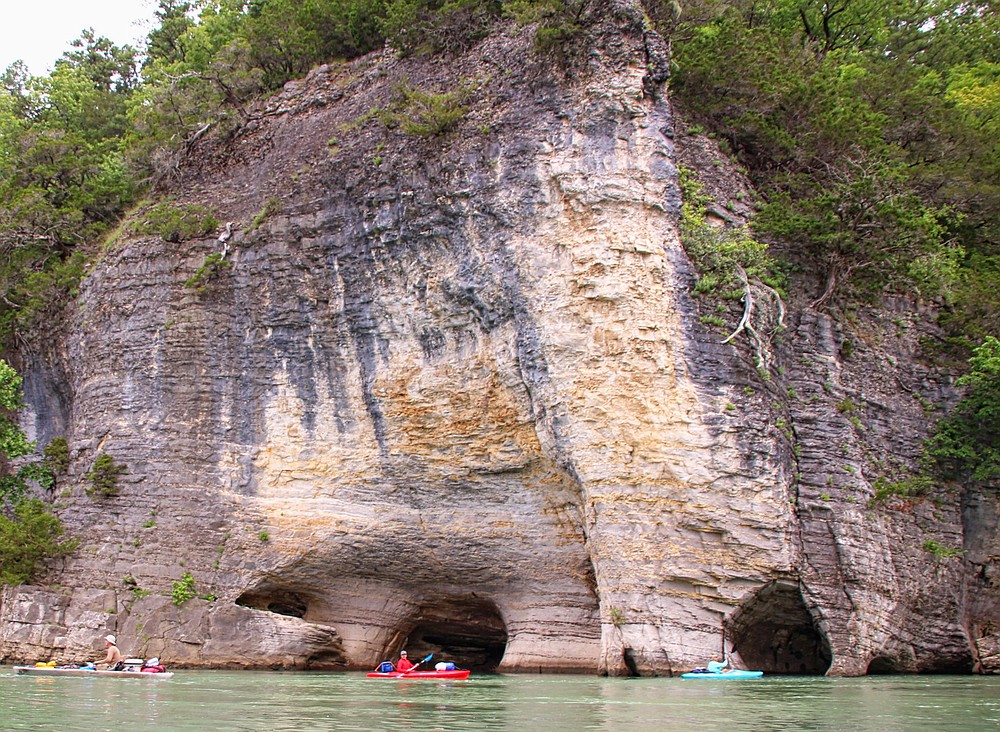 Members of the Arkansas Nature Lovers Meetup group check out Skull Rock during a three-day camping float trip May 28-30, 2021, on the lower Buffalo National River. (Special to the Democrat-Gazette/Bob Robinson)

Flowing water played an important role in shaping the Buffalo River. Erosion of limestone by chemical action was also a major contributor. The weak carbonic acid in rainwater eroded thin layers of insoluble chert, and they were carried away by floods.

Nowhere is this solution-wearing more evident than the "eye sockets" in Skull Bluff. Boaters can paddle their boats through these eyelets and around the nose of the bluff, an amazing experience.

A short float beyond Skull Bluff, we arrived at our takeout, the once-thriving community of Woolum. The town once featured a cotton gin, stave mill, store and houses. Remnants of these structures have long vanished. There is a campground here, making a convenient layover for floaters. Also, when the Buffalo is down, there is a low-water ford to crossover for a visit to the lush Richland Valley.

Following my long-standing tradition after Buffalo River outings, I treated myself to a meal at one of the oldest continuously operating restaurants in the state, Jasper's Ozark Cafe.

The hostess at the door told me it would be a 40-minute wait for a table to seat our group of five. I approached two gentlemen seated at a table for seven and asked if we could join them. One of the men pointed to a wood carved sign on the table, "Liar's Table, Where Your Boots."

"Well, you'll know when I'm spinning a yarn," I replied. "Because my lips will be moving."

With a smile, he pulled back a chair for me to join.

CORRECTION: The Ozarks were created by erosion of three vast, level plateaus of sedimentary rock that were left uplifted by an ancient collision of tectonic plates. An earlier version of this story mischaracterized the Ozarks Plateau as a mountain range.

Print Headline: Where the water takes us