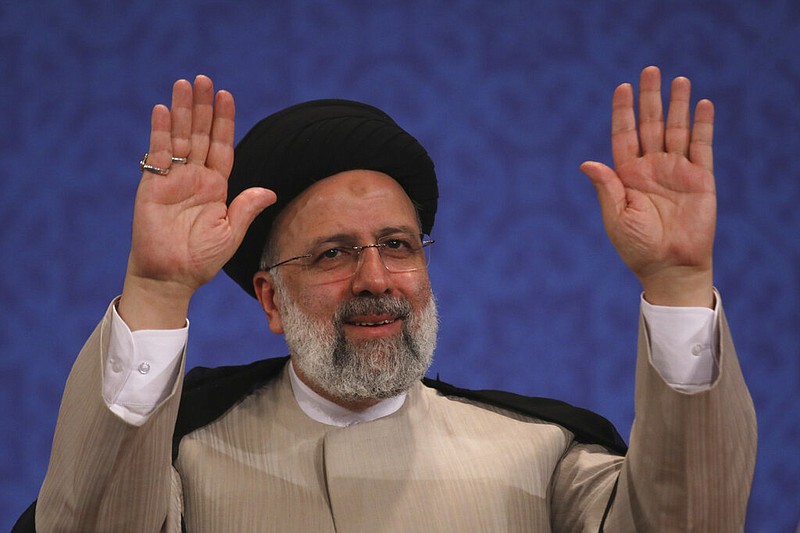 ISTANBUL -- Iranian President-elect Ebrahim Raisi said Monday that he opposes talks on limiting Tehran's ballistic missile program and its support for regional proxy forces. But he promised to salvage the 2015 nuclear deal to secure relief from U.S. sanctions that have devastated the Iranian economy.

Speaking in the Iranian capital at his first news conference since winning Friday's presidential election, Raisi also said he is not willing to meet President Joe Biden, even as the two sides work to revive the nuclear accord between Iran and world powers.

[Video not showing up above? Click here to watch » https://www.youtube.com/watch?v=X2wDOVrzzlg]

When asked whether he was willing to meet Biden, Raisi simply said, "No." He added that Iran's ballistic missiles and regional presence are "not negotiable."

White House press secretary Jen Psaki said Monday the U.S. does not have diplomatic relations with Iran "or any plans to meet at the leader level, so it's unclear that anything has actually changed on that front."

She added that Biden views Iran's supreme leader, Ayatollah Ali Khamenei, as the decision-maker. "That was the case before the election; it's the case today; it will be the case probably moving forward."

The ascendancy of a hard-liner hostile to the West has stoked concerns about the future of the nuclear accord and regional stability. But in his remarks Monday, Raisi emphasized the deal's importance, describing sanctions relief as "central to our foreign policy" and exhorting the U.S. to "return and implement your commitments."

He made the comments a day after Iranian authorities said they had temporarily shut down the country's only nuclear power plant because of unspecified technical difficulties. A statement from the Atomic Energy Organization of Iran late Sunday said the Bushehr plant on the Persian Gulf was shut down because of a "technical defect" and would be disconnected from the national power grid for several days.

Raisi, an ultraconservative Shiite cleric, is a hard-liner who had the backing of Khamenei and allied security services in the election. His victory marks a shift from the more reform-minded presidency of Hassan Rouhani, a moderate pragmatist who favored engagement with the West.

Human rights groups have linked Raisi, who most recently served as chief of Iran's judiciary, to numerous episodes of repression over decades and said he played a central role in mass killings of dissidents in the late 1980s.

Raisi had "been a member of the 'death commission' that forcibly disappeared and extrajudicially executed in secret thousands of political dissidents in Evin and Gohardasht prisons near Tehran in 1988," Amnesty International said in a statement Saturday, calling for Raisi to be investigated under international law.

Asked about the allegations Monday, Raisi said, "I have always defended people's rights since the beginning of my responsibilities. Human rights have been a pivotal point for me."

He faces political, economic and diplomatic challenges as Iran continues grappling with the effects of U.S. sanctions. Iran and world powers are working to resolve major issues that stand in the way of the United States returning to the landmark nuclear accord, from which the Trump administration withdrew in 2018.

Raisi's election was not expected to affect the negotiations in Vienna to revive the accord, in large part because Khamenei has allowed Iran to reopen the dialogue and appears ready to keep it going in efforts to get the international sanctions lifted.

National security adviser Jake Sullivan, reacting to Raisi's election, said Sunday that preventing Iran from obtaining a nuclear weapon remains a "paramount priority" for the United States, emphasizing that diplomacy "is the best way to achieve that."

Sullivan added that the United States believes the decision on whether to revive the nuclear deal lies not with Raisi but with Khamenei. "He was the same person before this election as he is after the election, so, ultimately, it lies with him," Sullivan said.

European diplomats said Sunday that Britain, China, France, Germany, Iran and Russia had concluded a sixth round of negotiations, but that no deal had been struck.

"We continue to make progress and have managed to agree on a number of important elements, but we still need to resolve the most difficult issues," said a statement from senior European diplomats involved in the negotiations.

"Time is on nobody's side. These talks cannot be open-ended," the statement said. "The time for decision is fast approaching."

Information for this article was contributed by Erin Cunningham, Loveday Morris and Kareem Fahim of The Washington Post; and by Isabel Debre and Jon Gambrell of The Associated Press.