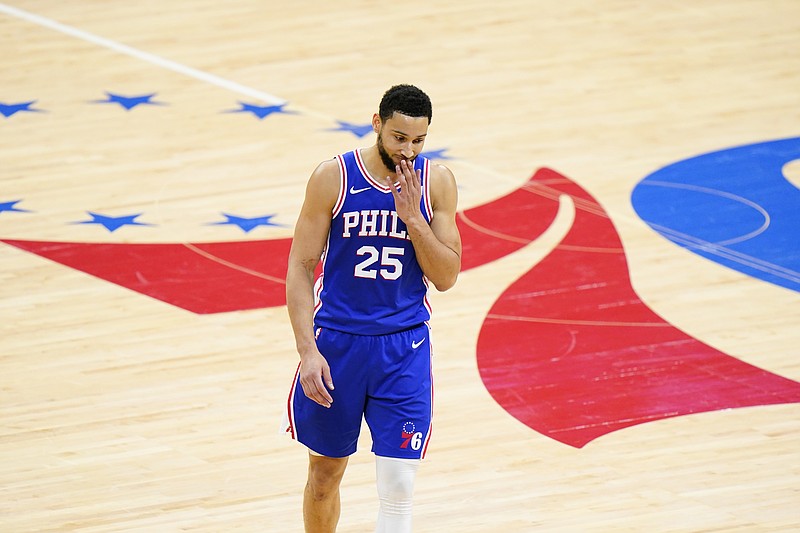 Philadelphia 76ers' Ben Simmons wipes his face during the second half of Game 5 in a second-round NBA basketball playoff series against the Atlanta Hawks, Wednesday, June 16, 2021, in Philadelphia. All-Star guard Ben Simmons could be on the trading block after a miserable postseason. (AP Photo/Matt Slocum)

PHILADELPHIA -- Ben Simmons backed his way to the basket, spun around Danilo Gallinari for the easy look at the net -- an uncontested layup, a dunk -- and he passed. Passed the ball. Passed on the shot. Passed on the chance to tie the game.

Joel Embiid threw up his hands in disbelief. With a chance to tie Game 7 against Atlanta late in the fourth quarter, Simmons surrendered the chance to play postseason hero and fed the ball to Matisse Thybulle.

"I just assumed Gallo was coming over my back," Simmons said.

Simmons thought Gallinari would try to foul him -- much as the Hawks did throughout the seven-game series victory to reach the Eastern Conference finals -- and going to the line in the clutch was a risk the All-Star guard was not willing to take.

His free-throw shooting was the poison in the postseason that ultimately knocked out the top-seeded Sixers. Simmons shot 25-for-73 (34%) from the line in the playoffs and missed 27 alone against the Hawks.

Unacceptable numbers for any player, much less a former No. 1 draft pick with more than $140 million left on his contract. He can't shoot threes (5-for-34 career), his free throws failed him and now Simmons is afraid to dunk. Coach Doc Rivers went from Simmons' most ardent supporter early in the playoffs to openly wondering about the guard's fate in Philly.

Simmons lost his shot, his confidence, and potentially his job in Philadelphia.

Rivers wasn't ready to rule out the return of the maligned guard if he's ready to put in offseason work.

"I'm very bullish on Ben, still," Rivers said Monday. "But there's work. Ben will be willing to do it and that's the key. Sometimes you have to go through stuff to see it and be honest with it. Obviously, what Ben just went through, I can't imagine that because he has so much greatness around him and all the things that he does."

His flashes of greatness -- he is a three-time All-Star -- are fleeting in the postseason.

"There's areas he can fix quickly, in my opinion, that will take him to another level," Rivers said. "I look at this as a great challenge but definitely a doable one."

Sixers guard Danny Green said Monday it was unfair that "everyone wants the narrative it's all Ben's fault."

"It's not just Ben. We all together win or lose," Green said. "He's a mentally tough kid, usually. We don't know what was going on. It happens with players. Ben has gone through quite a bit this year and it's not his fault that we lost."

Simmons' missed dunk opportunity that would have made it 88-88 with 3:29 left gnawed at Embiid. Thybulle was fouled on the play and made 1 of 2.

Embiid also blamed himself for a later turnover, but the MVP runner-up gamely carried the Sixers through the postseason while playing with a torn meniscus in his right knee.

Simmons had long been publicly coddled by former coach Brett Brown and Rivers -- who went so far as to chide a reporter for asking why Simmons was playing in late-game situations -- until his failures in the fourth ultimately sent him to the bench.

Simmons said "I love being in Philly" but the vitriolic reaction in the hours after the loss proved it doesn't love him back.

"Offensively I wasn't there," he said. "I didn't do enough for my teammates. There's a lot of things I need to work on."

Shaquille O'Neal said on TNT, "If he was in my locker room, I would have knocked his [butt] out."

Shaq's broader point was that it was about time Simmons stopped making excuses for his miserable play. Simmons said his free-throw woes were more mental than physical. At 24, Simmons seemed aware that a complete overhaul of his game may not happen in Philly -- or anywhere.

"I am who I am. It is what it is," Simmons said. "The first thing I'm going to do is clear my mind and get my mental [health] right." 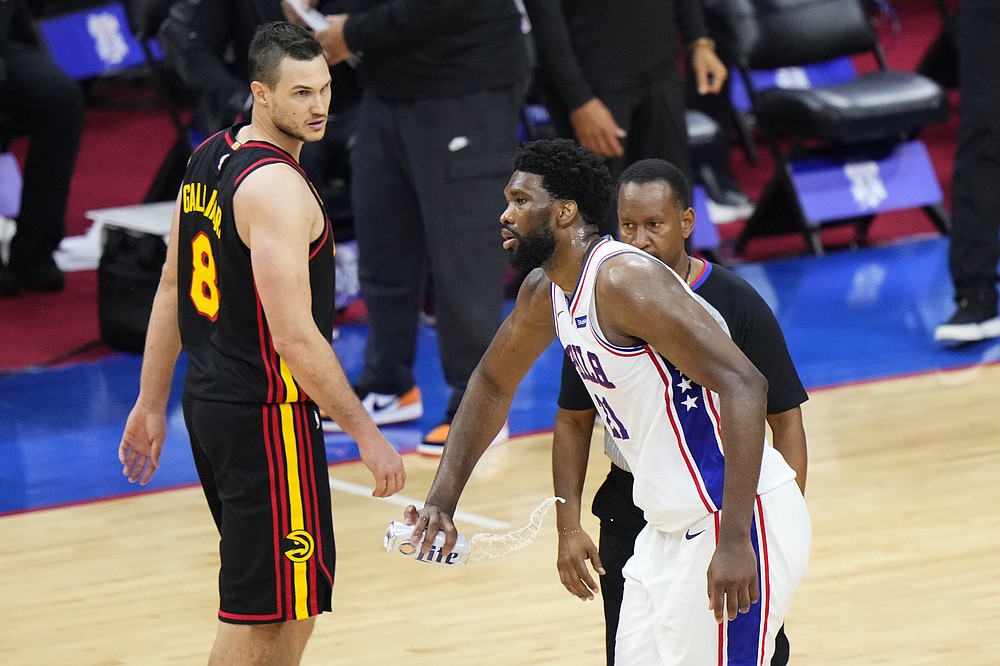 Philadelphia 76ers' Joel Embiid, right, tosses a beer can that was thrown onto the court as Atlanta Hawks' Danilo Gallinari looks on during the final minutes of Game 7 in a second-round NBA basketball playoff series, Sunday, June 20, 2021, in Philadelphia. The 76ers face an uncertain future after an early exit in the playoffs. (AP Photo/Matt Slocum) 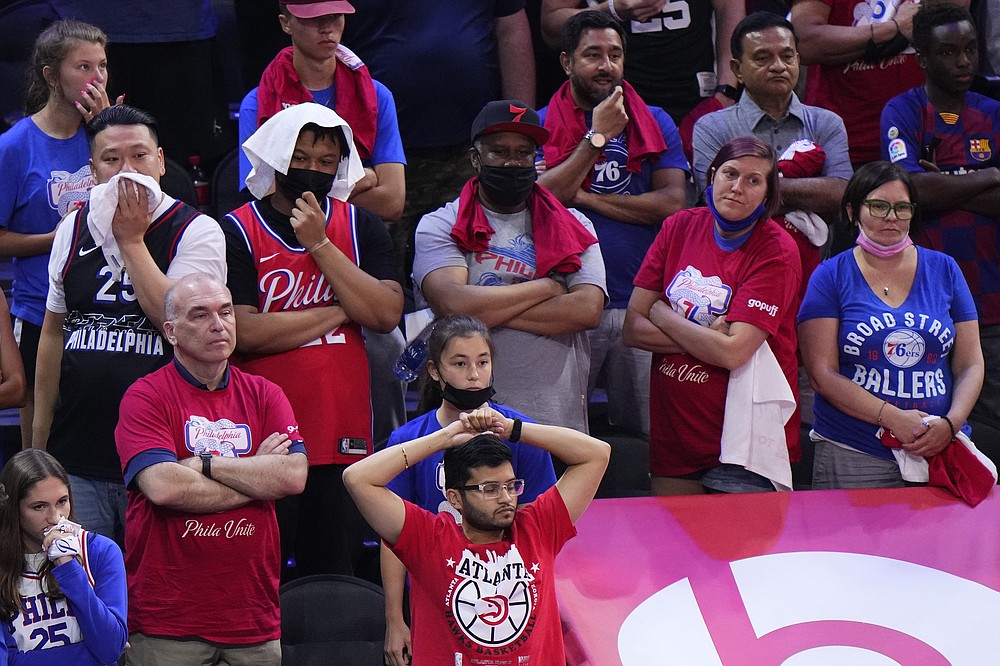 Philadelphia 76ers' fans watch the final minutes of Game 7 in a second-round NBA basketball playoff series against the Atlanta Hawks, Sunday, June 20, 2021, in Philadelphia. The 76ers face an uncertain future after an early exit in the playoffs. (AP Photo/Matt Slocum) 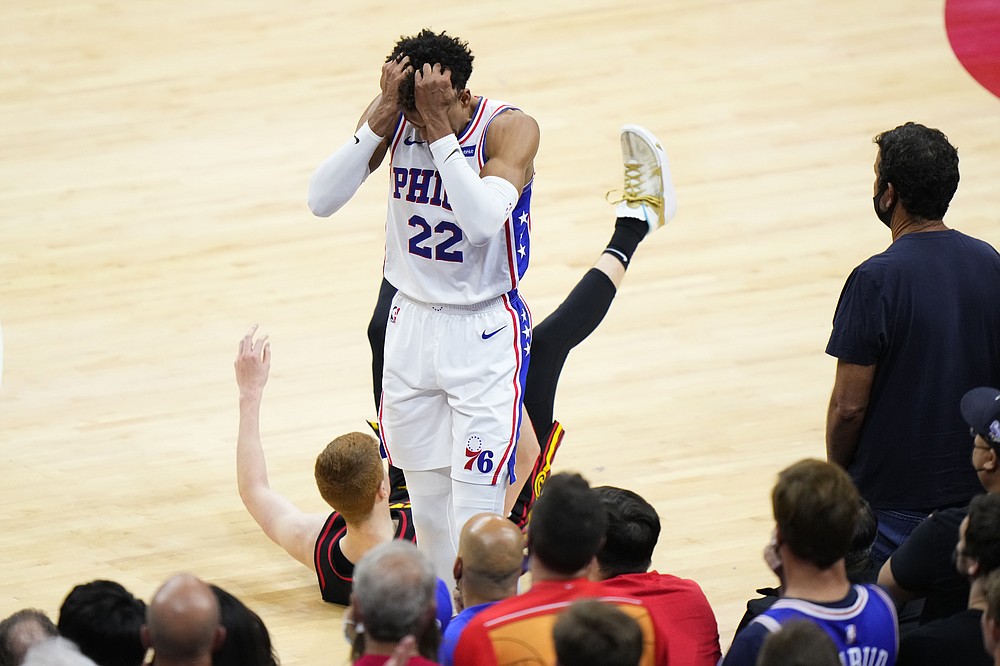 Philadelphia 76ers' Matisse Thybulle reacts after fouling Atlanta Hawks' Kevin Huerter in the final minutes of Game 7 in a second-round NBA basketball playoff series, Sunday, June 20, 2021, in Philadelphia. The No. 1 seed, the home-court edge and playing a Hawks team that fired its coach and didn’t have a single All-Star wasn’t enough to even get the 76ers to the East final. (AP Photo/Matt Slocum) 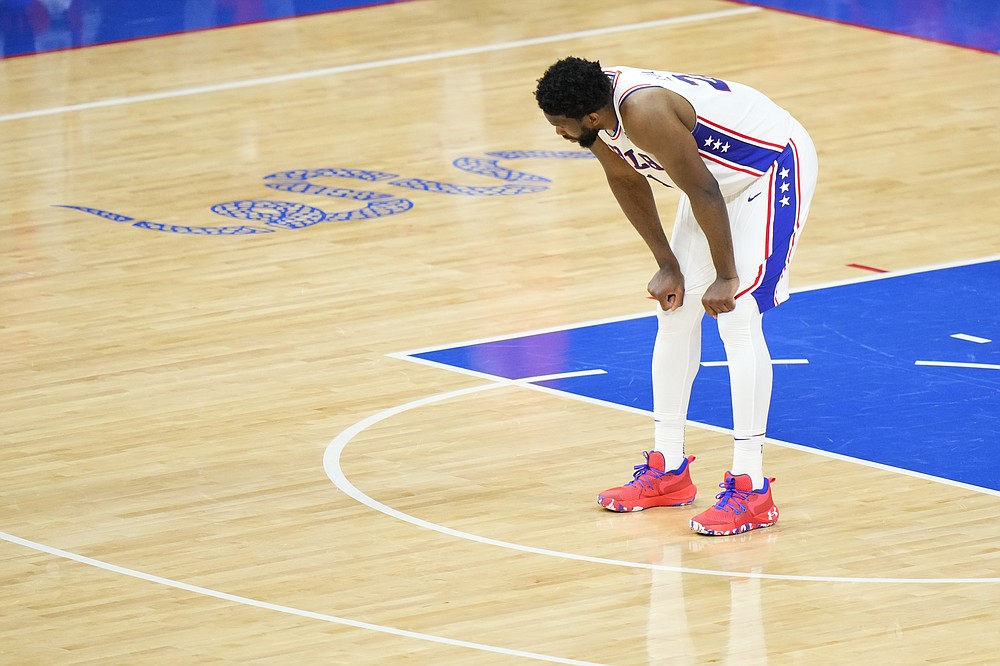 Philadelphia 76ers' Joel Embiid reacts during Game 7 in a second-round NBA basketball playoff series against the Atlanta Hawks, Sunday, June 20, 2021, in Philadelphia. The Hawks advanced with a 103-96 win over the 76ers. Embiid tried to carry the team but was hindered by a knee injury. (AP Photo/Matt Slocum)