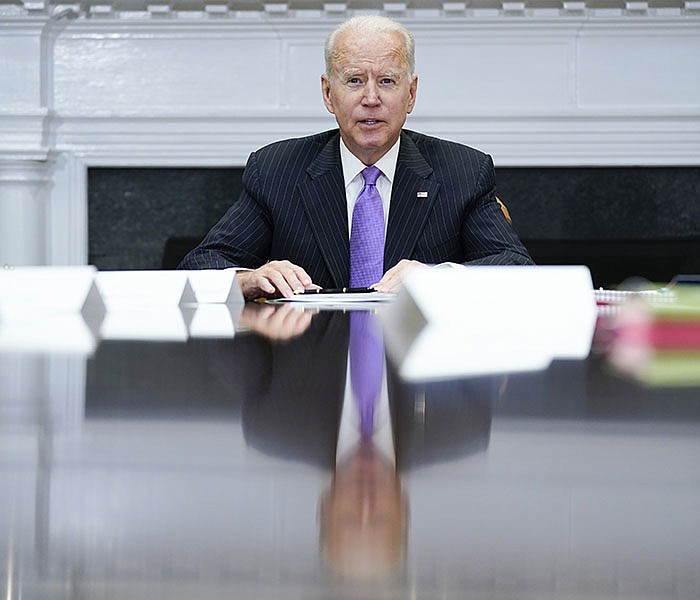 WASHINGTON -- The United States will miss President Joe Biden's original goal of getting at least one dose of coronavirus vaccine to 70% of adults by July 4, White House coronavirus coordinator Jeff Zients said Tuesday.

The nation needs "a few extra weeks" to ensure that Americans between ages 18 and 26 are vaccinated at rates similar to older adults, Zients said at a White House news briefing. He added that the United States would miss a second goal laid out by Biden: ensuring that 160 million Americans were fully vaccinated by Independence Day.

White House officials and public health experts dismissed the significance of missing his goal, maintaining they are more concerned about regional variations in vaccination rates that could lead to a rebound of the virus, and focused on ending the pandemic at home and abroad.

"Our aspirational goal for July Fourth was 70% of the adult population receiving at least one dose. But that is not the goal line, nor is it the endgame," Dr. Anthony Fauci, the nation's top infectious-disease expert, said at the news briefing, adding that "the ultimate goal" is "crushing the outbreak completely in the United States."

"We're not slowing down at all. If anything, we're speeding up," Zients said.

[Video not showing up above? Click here to watch » https://www.youtube.com/watch?v=zoDj0MnpueY]

White House press secretary Jen Psaki rejected the idea that the missed July 4 benchmarks would represent a failure for the administration, telling reporters, "We don't see it exactly like something went wrong."

The nationwide rate of new vaccinations has dropped off precipitously over the past month even as shots have become more available, with fewer than 300,000 Americans now getting their first dose per day on average -- a pace that, if sustained, will have the U.S. not reaching Biden's 70% goal until late July at the earliest.

More than 16 states and the District of Columbia have vaccinated 70% of their adult populations. But others -- particularly in the South and Midwest -- are lagging substantially behind. Fewer than 50% of adults in Alabama, Louisiana, Mississippi and Wyoming have received at least one shot.

Surveys continue to find that nearly one-third of Americans have no immediate plan to get vaccinated, citing objections such as a belief that the coronavirus threat has been exaggerated or evidence that previously infected people retain some immunity to the virus.

Public health experts say they are concerned that the national statistics can disguise significant disparities, such as the relatively low vaccination rates for Republicans and members of minority groups.

Biden, who in May announced his target of ensuring that 70% of adults had received at least one shot by July 4, has avoided mentioning his goal in recent remarks. Instead, the president and White House officials have touted the significant progress in vaccinations this year and the corresponding downturn in coronavirus cases and deaths. Biden also is planning to host an Independence Day celebration at the White House with about 1,000 military and front-line workers, an event intended to mark the nation's progress against the virus.

"We are going to have a Fourth of July celebration, which is beyond everyone's highest expectations," Zients told reporters, crediting the vaccine rollout.

The White House has overseen a flurry of activities and promotions intended to boost shots, including coordinating coupon giveaways and advertisements on video game platforms, but with unclear success.

Public health experts have said the United States needs widespread immunity to prevent a resurgence of covid-19 cases this year, particularly as the virus continues to mutate. Zients and others Tuesday warned that the delta variant has been shown to be highly transmissible, linked to a spike in hospitalizations overseas and poses a higher risk to younger adults.

The delta variant, first identified in India, in the last two weeks has come to represent more than 20% of coronavirus infections in the U.S., the Centers for Disease Control and Prevention reported Tuesday. That's double what it was when the CDC last reported on the variant's prevalence.

"The delta variant is currently the greatest threat in the U.S. to our attempt to eliminate covid-19," Fauci said at the White House briefing. "Good news: Our vaccines are effective against the delta variant."

Americans at highest risk for complications from covid-19 are overwhelmingly vaccinated, according to CDC data, but only 53% aged 25-39 have received one dose. Among those 18-24, it's 47%.

"Where the country has more work to do is particularly with 18- to 26-year-olds," Zients said.

Zients said the rise of the delta variant should motivate younger Americans to get vaccinated.

"The reality is many younger Americans have felt like covid-19 is not something that impacts them, and they've been less eager to get the shot," Zients said. "However, with the delta variant now spreading across the country, and infecting younger people worldwide, it's more important than ever that they get vaccinated."

The variant is taking root as there are warning signs about a possible surge in cases in unvaccinated corners of America. Rural sections of Missouri, including Springfield and Branson, have seen a dramatic spike in covid-19 hospitalizations in recent weeks that health officials attribute in part to the delta variant spreading among younger, unvaccinated residents.

"There is a danger, a real danger that if there is a persistence of a recalcitrance to getting vaccinated that you could see localized surges," said Fauci.

The White House planned to focus on increasingly local vaccination pushes, with first lady Jill Biden traveling Tuesday to Mississippi and Tennessee to promote vaccinations and Biden himself set to visit North Carolina on Thursday.

The variant is accounting for half of new infections in the regions that include Iowa, Kansas, Missouri, Nebraska, Colorado, Montana, North Dakota, South Dakota, Utah and Wyoming.

Separately, a government watchdog reported Tuesday that deaths among Medicare patients in nursing homes soared by 32% last year, with two devastating spikes in April and December.

The report from the inspector general of the Department of Health and Human Services found that about 4 in 10 Medicare recipients in nursing homes had or likely had covid-19 in 2020, and that deaths overall jumped by 169,291 from the previous year, before the coronavirus appeared.

Investigators used a generally accepted method of estimating "excess" deaths in a group of people after a calamitous event. It did not involve examining individual death certificates of Medicare patients but comparing overall deaths among those in nursing homes to levels recorded the previous year. The technique was used to estimate deaths in Puerto Rico after Hurricane Maria in 2017 and in New York City after the first coronavirus surge last spring. It does not attribute a cause of death but is seen as a barometer of impact.

Death rates were higher in every month last year when compared with 2019. The report documented two spikes with particular implications for government policy and for protecting the most vulnerable in future outbreaks of life-threatening illnesses. In April of last year, a total of 81,484 Medicare patients in nursing homes died. Then in December, after lockdowns and frantic efforts to expand testing -- but before vaccines became widely available -- nursing home patients accounted for a staggering 74,299 deaths.

"This is happening long after it was clear that nursing homes were particularly vulnerable," said Nancy Harrison, a deputy regional inspector general who worked on the report.

"We really have to look at that. Why did they remain so vulnerable?" Federal investigators are still drilling down to try to document the chain of causes and effects.

Tuesday's report was the most comprehensive yet from the government because it included statistics for the early part of last year, during the initial coronavirus surge. Medicare did not require nursing homes to report covid-19 cases and deaths occurring before May 8, 2020.

The two main nursing industry groups, the American Health Care Association and LeadingAge, said the grim statistics reflect the consequences of society and government not placing a high enough priority on the needs of frail elders.

The report "showed once again how ageism can result in policies that treat older people as expendable," said Katie Smith Sloan, president of LeadingAge, which represents nonprofit homes.

The report also showed that cases and deaths among Asian American patients tracked with the more severe impacts seen among Blacks and Hispanics. Asian Medicare enrollees in nursing homes saw the highest increase in death rates, with 27% dying in 2020 compared with 17% the previous year. Death rates for Hispanic and Black patients were 23% last year, up from 15% in 2019. For white patients, the death rate grew to 24% in 2020 from 18% in 2019.

Information for this article was contributed by Dan Diamond of The Washington Post; and by Zeke Miller, Mike Stobbe and Ricardo Alonso-Zaldivar of The Associated Press.