Pistons on clock with No. 1 draft pick 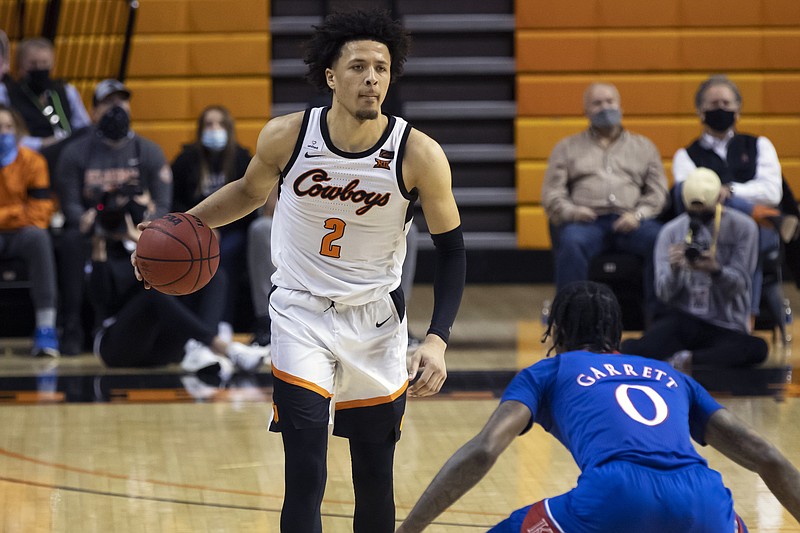 FILE - In this Tuesday, Jan. 12, 2021 file photo, Oklahoma State's Cade Cunningham (2) brings the ball up the court during the second half of the NCAA college basketball game against Kansas in Stillwater, Okla. The Detroit Pistons won the NBA draft lottery on Tuesday night, June 22, 2021 grabbing the No. 1 pick in the July 29 draft and presumably the chance to select Oklahoma State guard Cade Cunningham. If the Pistons keep the pick, it'll be the first time they select No. 1 overall since taking Bob Lanier in 1970.(AP Photo/Mitch Alcala, File)

Newly selected Basketball Hall of Famer Ben Wallace tapped his fist on the table a few times, then clapped his hands and pointed one finger skyward.

After one of the worst seasons in franchise history, Detroit has something to celebrate.

The Pistons won the NBA Draft lottery Tuesday night, meaning they'll have the No. 1 pick on July 29 -- and, presumably, the chance to take Oklahoma State guard Cade Cunningham.

"We get to add another young player to the restoration process," Pistons General Manager Troy Weaver said. "We're excited to be in this position. But it means that we've got a lot of work to do. We're going to be diligent about it, but it always helps to be able to add a No. 1 pick from a talented group of players to choose from."

Houston got the No. 2 pick. Cleveland will pick No. 3 and Toronto will pick No. 4, after both of those franchises got some lottery luck to move up in the order.

But the big winners were the Pistons, with Weaver saying the team will take a look at five players before deciding on the No. 1 selection. Unless Detroit moves the pick, it will be picking No. 1 overall for the first time since taking Bob Lanier in 1970.

Weaver said Cunningham -- just the fourth player to win Big 12 Player and Freshman of the Year honors in the same season after averaging 20.2 points per game in his lone collegiate season -- is at the "top of the list."

Orlando will get the No. 5 and No. 8 selections, with Oklahoma City picking No. 6 and Golden State also with two lottery slots -- No. 7, as part of a trade with Minnesota, and the Warriors' own pick at No. 14.

The lottery -- 14 pingpong balls, all numbered 1 through 14, placed into a hopper -- technically only determines the first four picks. The rest then defaults to a pre-established order of finish; Golden State, for example, had only a 2.4% chance of its own pick being anything other than the No. 14 selection.

And form held through the first six picks that were unveiled. The No. 8 pick, which was slotted to Chicago, winds up with the Magic as part of the Nikola Vucevic trade from this season. That's when the first significant buck-the-odds move happened, when Toronto's 31.9% chance of cashing into a top-four slot delivered.

The Thunder will have three first-round picks, but none higher than No. 6. That's good news for them, and really good news for Houston.

The Rockets had a 52% chance of winning a top-four pick. The worst Houston could do was the No. 5 selection, and that truly was a worst-case scenario because if the Rockets were outside of the top four the pick would convey to Oklahoma City as part of the compensation for the Russell Westbrook-Chris Paul trade between those teams in 2019. In that scenario, if Houston had gotten the No. 5 pick, it would have gone to the Thunder in exchange for the No. 18 pick.

But the Rockets held on, getting the No. 2 pick as one of the building blocks they can use to reload after finishing with the NBA's worst record this season. Viewers might have found out the order before Rockets General Manager Rafael Stone, who decided not to watch the countdown.

"I decided that probably would be unpleasant," he said.

The consensus opinion has been that the No. 1 pick will be either a one-and-done college player -- Cunningham, Southern California center Evan Mosley or Gonzaga guard Jalen Suggs -- or someone from the G-League development program such as guard Jalen Green or forward Jonathan Kuminga. University of Arkansas freshman Moses Moody is also projected as a lottery pick in many mock drafts.

Sitting at No. 3 gives the Cavs a chance to add another young player to their "core four" -- Darius Garland, Collin Sexton, Isaac Okoro and Jarrett Allen -- and maybe find a player capable of pushing Cleveland back to relevance.

"Even beyond the top five, there could be potential All-Stars," he said.

Print Headline: Pistons on clock with No. 1 draft pick