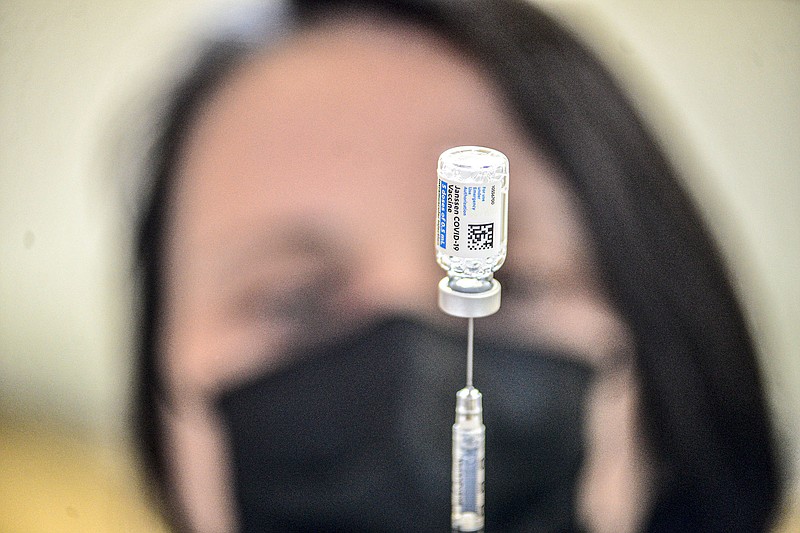 The rapid spread of the delta variant of the coronavirus is poised to divide the U.S. again, with highly vaccinated areas continuing toward post-pandemic freedom and poorly vaccinated regions threatened by greater caseloads and hospitalizations, health officials warned this week.

The highly transmissible strain already is taxing hospitals in a rural, lightly vaccinated part of Missouri, and caseloads and hospitalizations are on the rise in states such as Nevada, Arkansas and Utah, where fewer than 50% of the eligible population has received at least one dose of vaccine, according to data compiled by The Washington Post.

Missouri's intensive care beds are filling up with young, unvaccinated patients, and staff members are getting burned out fighting a battle that was supposed to be in its final throes.

The hope among some health leaders is that the rest of the U.S. will at least learn something from Missouri's plight.

"If people elsewhere in the country are looking to us and saying, 'No, thanks,' and they are getting vaccinated, that is good," said Erik Frederick, chief administrative officer at Mercy Hospital Springfield, which has been inundated with covid-19 patients as the variant first identified in India rips through the largely nonimmunized community. "We will be the canary."

The state now leads the nation with the highest rate of new covid-19 infections, and the surge is happening largely in a farming region in the northern part of the state and in the southwestern corner, which includes Springfield and Branson, the country music mecca in the Ozark Mountains where big crowds are gathering again at the city's theaters and other attractions.

While more than 53% of all Americans have received at least one shot, according to the Centers for Disease Control and Prevention, most southern and northern Missouri counties are well short of 40%. One county is at just 13%.

Republican Gov. Mike Parson has taken the position that it is better to ask people to take "personal responsibility" than to enact restrictions.

[Video not showing up above? Click here to watch » https://www.youtube.com/watch?v=iuTRPUSocME]

Missouri never had a mask mandate, and Parson signed a law last week placing limits on public health restrictions and barring governments from requiring proof of vaccination to use public facilities and transportation.

Frederick said some people in the heavily Republican state are resistant because they feel as if Democrats are pushing the vaccine.

"I keep telling people, while we are busy fighting with each other, this thing is picking us off one by one," he said. "It takes no sides. It has no political affiliation. It is not red. It is not blue. It is a virus. And if we don't protect ourselves, we are going to do a lot of damage to our community."

Cases remain below their winter highs in southwestern Missouri, but the trajectory is steeper than in previous surges, Frederick said. As of Tuesday, 153 covid-19 patients were hospitalized at Mercy and another Springfield hospital, Cox Health, up from 31 just over a month ago, county figures show.

These patients are also younger than earlier in the pandemic -- 60% to 65% of those in the ICU over the weekend at Mercy were under 40, according to Frederick, who noted that younger adults are much less likely to be vaccinated -- and some are pregnant.

He is hiring traveling nurses and respiratory therapists to help out his fatigued staff as the rest of the country tries to leave the pandemic behind.

"I feel like last year at this time it was health care heroes, and everybody was celebrating and bringing food to the hospital and doing prayer vigils and stuff, and now everyone is like, 'The lake is open. Let's go.' We are still here doing this," he said.

There are also warning signs across the state line: Arkansas on Tuesday reported its biggest one-day jump in cases in more than three months. The state also has low vaccination rates.

"The delta variant is currently the greatest threat in the U.S. to our attempt to eliminate covid-19," said Dr. Anthony Fauci, the nation's top infectious disease expert. He said there is a "real danger" of local surges like the one in Missouri in places with deep vaccine resistance.

One influential model, produced by the Institute for Health Metrics and Evaluation at the University of Washington, predicts a modest overall surge in cases, hospitalizations and deaths this fall. Scott Gottlieb, former head of the Food and Drug Administration, said Sunday there could be a fall surge even if 75% of the eligible population is vaccinated.

But experts think that most damage will occur in localized pockets where large numbers of people have declined to be vaccinated or have not gained access to the shots.

"I think a rise in cases is certainly going to happen," said William Hanage, an associate professor of epidemiology at the Harvard T.H. Chan School of Public Health. "[The question] is how large a rise and how consequential it's going to be.

"Those undervaccinated communities are more likely to be severely affected," he said.

At a briefing by the White House covid-19 Response Team on Tuesday, Fauci said "there is a danger -- a real danger -- that if there is a persistence of a recalcitrance to getting vaccinated, that you could see localized surges, which is the reason why I want to emphasize what all four of us have said: All of that is totally and completely avoidable by getting vaccinated."

Resistance is greatest among younger people. Just 38.3% of people ages 18-29 have been vaccinated, according to federal research released Monday. Across all age groups, people living in counties with high rates of poor and uninsured people and less access to computers and the Internet were less likely to be vaccinated, the research showed.

In general, rural areas have embraced vaccination less than cities and states in the Northeast and along the West Coast. All the New England states have given at least one dose to 61% of their residents or more. In San Francisco, 65% of residents are fully vaccinated.

Overall, the nation has made significant progress against the virus. The seven-day average of new daily cases has plummeted to 10,350 and deaths are down to an average of 273 each day, Rochelle Walensky, director of the Centers for Disease Control and Prevention, reported Tuesday. Those figures are a small fraction of January average daily peaks of nearly 250,000 cases and 3,300 deaths.

In addition, with 80% of adults older than 65 vaccinated, the most vulnerable population is largely protected. That should mean many fewer deaths and hospitalizations even if another widespread surge were to occur this fall or winter.

But the delta variant, which is much more transmissible and causes more severe illness than previous versions of the virus, is taking over the U.S. with stunning speed, as it did in India, where it was first identified, and later Britain. It has doubled as a percentage of new infections every two weeks, Fauci said, from 1.2% of new infections on May 8 to 20.6% this week. Officials expect it to soon become the dominant strain in the U.S.

Helix, a lab company working with the CDC to sequence samples, also concluded that the delta variant and the gamma variant first identified in Brazil are rapidly replacing the alpha variant that was first identified in the United Kingdom and took over in a matter of months, according to research the company posted this week. The work has not yet been peer reviewed.

The delta variant may accomplish the same thing within weeks.

"It has come out of nowhere," said Mark Pandori, who runs the genomics lab at the University of Nevada, Reno. "It seems to be a very successful variant and is closing in on the No. 1 spot."

Pandori emphasized that the number of positive cases is very low, as they are in many other parts of the country, and that the small number of breakthrough infections among those who have been vaccinated appears to confirm the immunizations' effectiveness against current variants, including delta.

Pavitra Roychoudhury, a virologist at the University of Washington, said cases in the state have been almost exclusively caused by the alpha variant for several months. But in the past two weeks, cases of both the delta variant and the gamma variant have been increasing.

Karthik Gangavarapu, a researcher at the Scripps Research Institute in San Diego who works on genomic epidemiology, predicted that the delta variant may make up more than 50% of cases by July, based on the volume state labs are seeing. He said the numbers appear to confirm early studies that the variant may be 40% to 60% more transmissible than the alpha variant, which is already more transmissible than the original virus that emerged from Wuhan, China.

"I think the delta variant is troubling. I'm not going to lie," he said.

The U.S. has endured regional outbreaks earlier in the pandemic. The virus first crashed through New York and the northeast in March and April of 2020, then tore through the Sun Belt last summer. In January, the entire country was engulfed by the highest caseloads and death counts of the pandemic.

But vaccines were not available then. Now they are. A Post analysis showed that as recently as the beginning of June, diverging vaccination rates did not predict a difference in case loads. But about the middle of the month, the number of infections began to decrease markedly in places where many people were immunized and increase in areas where they are not.

Now, experts say they think that trend will continue and grow more pronounced unless vaccination rates pick up in places where they are lagging. And the more the virus circulates, in the U.S. and the rest of the world, the greater the chances that an even more transmissible or dangerous variant will emerge.

"There is light at the end of the tunnel, but it's quite a dark tunnel," Gangavarapu said. "As long as vaccination continues, we should be able to avert a further surge. But how this thing will pan out is still a question."

Information for this article was contributed by Heather Hollingsworth of The Associated Press and by Ariana Eunjung Cha, Karla Adam, Ben Guarino and Lenny Bernstein of The Washington Post. 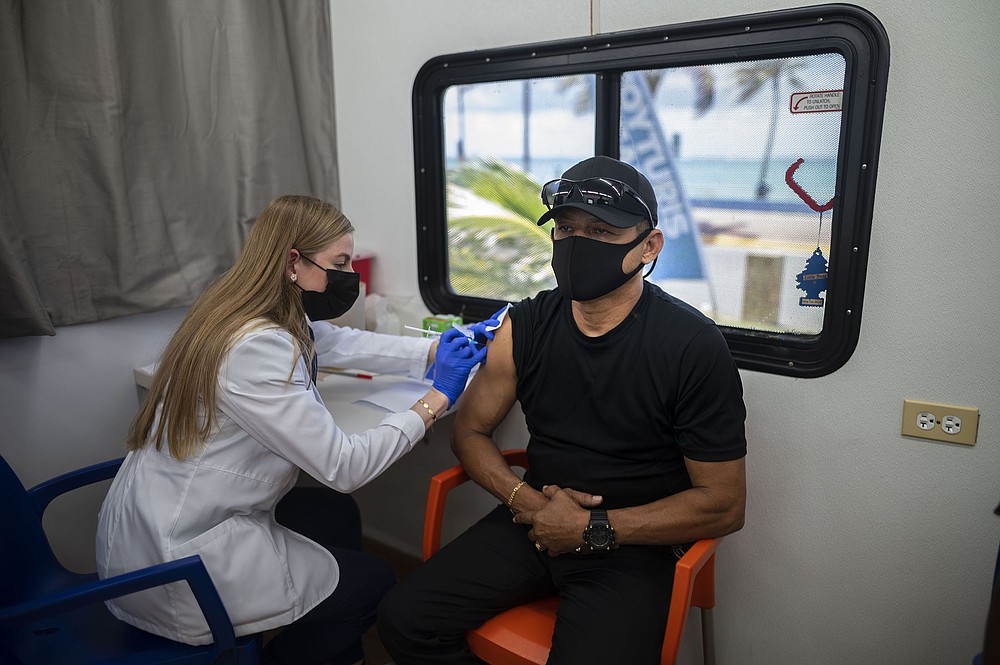