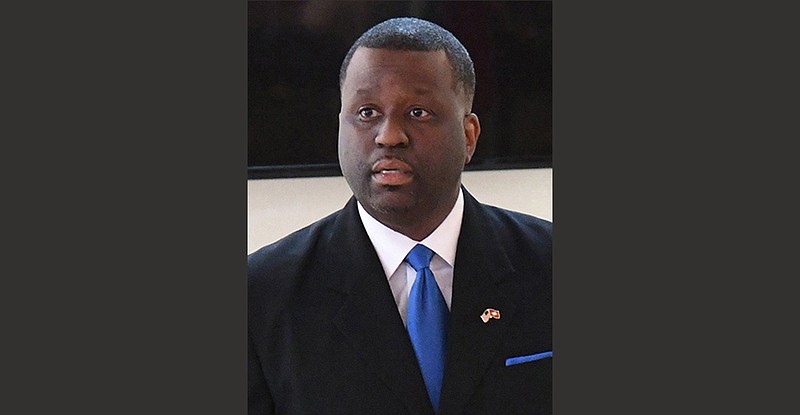 Anthony Bland announces he is running for governor at The Webb Center.

HOT SPRINGS -- The field of candidates running for governor in 2022 grew this week after Anthony Bland announced Wednesday he will seek the Democratic nomination for governor.

The Fayetteville native who is a minister and works as a teacher for the Little Rock School District made his announcement at the Webb Center, a community outreach organization working with underserved, predominantly Black populations in the Hot Springs area.

Bland, who lives in Little Rock and is 42, is the fourth Democratic to announce a candidacy for governor. Chris Jones, the former executive director of the Arkansas Regional Innovation Hub, announced earlier this month that he would seek the Democratic nomination for governor.

Improving education in the state will be a pillar of Bland's campaign platform, the educator, who has a doctorate in business administration, said during his announcement speech.

"My story is grounded in a set of values I was raised on," Bland said. "The American dream for too many Arkansans right now is too far out of reach. Opportunities are hard to come by, no matter how hard you work. For too long, our leaders have been putting politics over people."

"What we need are policies that make sure that everybody is treated fairly," he said to a crowd of about 20 people at the community center. "We need to create jobs right here in Arkansas, from the Ozarks to the Delta."

"We need to create opportunities for our state that will keep families here," Bland said. "We need real investment in education that will support all students."

This is not Bland's first foray into politics.

In 2018, he ran for Arkansas secretary of state, later changing races to vie for lieutenant governor.

"I was raised to believe you are supposed to love your neighbor," Bland said Wednesday. "The democracy our ancestors fought so hard to make a reality is on a destructive path to dictatorship by various elected officials.

"I commend those who want to serve the public," Xayprasith-Mays said. "I encourage open discussion that brings people together. More people in the race facilitates a broad-base discussion about the challenges facing Arkansans."

Russell said he is "heartened" by the number of Democratic contenders who are launching campaigns.

"I am looking forward to talking more with him [Bland] on the trail and seeing whose policies pan out and get voter engagement," Russell said. "We have good candidates who represent a wide range of backgrounds, ideas and ideologies, so to me that can only benefit our state by giving people more choices moving forward."

Abby Anderson, a campaign spokesperson for Jones' campaign, said via email that Jones "welcomes candidates to the race" and "looks forward to earning the Democratic nomination by listening to the people and sharing his vision for moving Arkansas forward that includes building an economy that works for all Arkansans."

Bland said he is aware of the challenges to come in a predominantly Republican state and that he hopes to work with all parties to represent the interests of constituents rather than politicized issues.

"I can talk to any individual regardless of their political views or status," Bland said. "I am here for the people, not for political gain."

Republican Gov. Asa Hutchinson, who has held the office since 2015, is barred from seeking reelection under the state's term-limits amendment.

The primary election is scheduled for May 24, according to the secretary of state's office. The party nominees face each other in November. The term of office is four years. The governor, with a salary of $154,115, is the top-paid constitutional officer in the state.