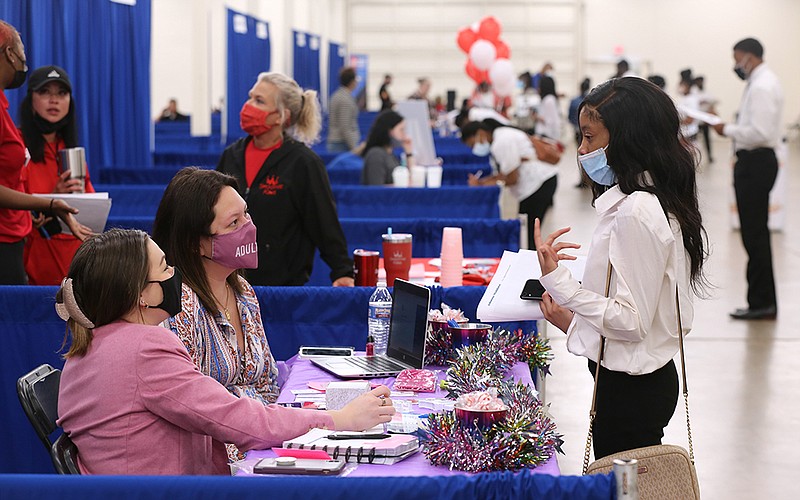 Jobless Arkansans appear to be searching for work for the first time in months, nudged back into the job market in part by the state's impending shutdown of supplemental federal unemployment benefits.

Economic development and job placement officials said Wednesday that unemployed workers who have been buoyed by the extra $300 a week provided by the federal government now may be pushed back into the labor force as that supplemental benefit disappears. In May, Gov. Asa Hutchinson announced the state would stop the federal payment Saturday.

At the same time, observers say, many of those ready to enter the job market are taking the time to find the right fit and perhaps switch careers to improve their earning power.

Goodwill Industries of Arkansas reports more activity at its nine career centers across the state as more job seekers stop in looking for help and more employers seek support with hiring.

"Since the governor's announcement, we have seen a 62% increase in job-seeker activity in our career centers across the state," said Tammy Wheaton, director of the career training academy and career services at Goodwill. "It's a significant jump in the past month."

More and more employers have turned to Goodwill to help set up job fairs and other activities to draw workers. "We have seen an uptick in requests to work with them," Wheaton said. "It's been 18 months since we've conducted a hiring event for employers."

On Wednesday, Goodwill conducted its first employer-support event since the pandemic began and the organization has another one scheduled for today.

"We have nine career centers across the state, and all nine have started setting up hiring events for employers," she said. "It's been a real whirlwind."

Commerce Secretary Mike Preston said he is hopeful more Arkansans will return to the workforce to fill thousands of positions after the state shuts down the supplemental federal benefits.

"We thought it was important to end the benefits to get people back to work," Preston said Wednesday, adding that the Goodwill indicator is a positive sign for the job market.

"We're hearing the same thing, anecdotally, from other employers," Preston said. "It looks like this is working the way we hoped it would. I think we'll see a surge as the benefits end on the 26th."

At Goodwill, Wheaton said many of the job seekers are using the time off to increase their skills and reevaluate their career options.

"Many are taking the opportunity to increase their skill level and move to a different career path," she said. "We have a good mix of people who want to up-skill and then others who want to brush up and improve the skills that they have to get back into the workforce."

That approach likely is an underlying factor in the decrease in the Arkansas labor force as unemployed workers, buoyed by the extra $300 a week in federal jobless benefits and the availability of jobs in the state, take more time to evaluate what they want to do next, officials say. The state's labor force dropped by 4,733 from April to May and has suffered declines over the past several months. State officials have estimated there are more than 40,000 jobs available.

"The change in the federal benefit package certainly will encourage more people to reenter the workforce," Pakko said. "Yet that in and of itself is not the full answer, it's a partial answer."

Workers know they have a little more time to make the right decision because of the broad availability of jobs, Pakko said.

At the same time, employers have used the pandemic to reevaluate and have become more flexible to accommodate workers, according to Jay Chesshir, president and chief executive officer of the Little Rock Regional Chamber of Commerce.

Today's economy reflects that new approach and it will take some time for businesses and workers to adjust, Chesshir said.

The pandemic pushed forward changes in the employer-employee relationship, according to Chesshir. "That worker and employer relationship has not only evolved but has, in many cases, significantly changed in a very short period of time.

"The workforce today has certainly been heard in terms of what it needs to be productive," Chesshir said. "There needs to be more flexibility so that a person can work and still take care of whatever their personal needs are. While there was some discussion of that 16 months ago, it's a hot topic of conversation today for leaders and management across this city, across this state and across this country now."

Unemployed workers are preparing to reenter the workforce with a different approach, Chesshir noted.

"Individual workers now have the ability to create the skill level changes that allow them to be eligible for better jobs than what they had before," he said. "That's going to benefit not only the employee but also the employers. The pause caused by the pandemic has given people the opportunity to rethink what they do and what they want to do."

Though the federal unemployment supplement is ending, jobless Arkansans still can collect a weekly benefit from the state until their eligibility expires.

The $300 Federal Pandemic Unemployment Compensation program is scheduled to end in September. Since the program began more than a year ago, Arkansans have received more than $2 billion in payments, officials said.

With the federal benefit ending this week, Preston said the workforce services staff members will be able to concentrate more on helping Arkansans find jobs.

The Division of Workforce Services, since the pandemic ripped across Arkansas last spring, has been focused on processing unemployment benefits -- and now the department is ready to do more job fairs with employers and help the jobless find work.