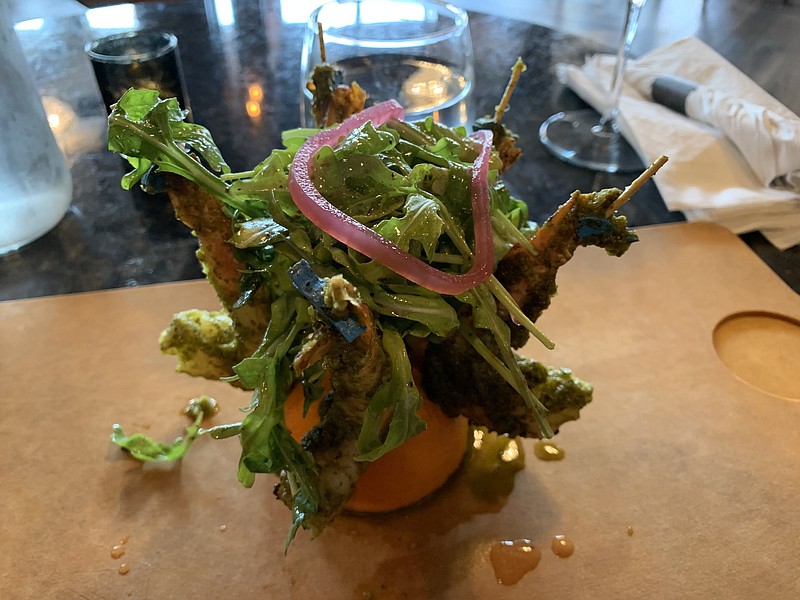 About a month back, Cannibal & Craft, the dual-level lounge that succeeded duo-piano bar Ernie Biggs on President Clinton Avenue in Little Rock's River Market, posted a dress code on its window that sparked significant backlash on social media.

Legal? Absolutely — private businesses have every right to determine who they let through the door and the criteria therefore. (This is, in its way, just a hyper-ed version of "no shoes, no shirt, no service.") Question, though: Would this establishment truly have barred guests wearing Razorback paraphernalia during football season? On weekends when there are games in town, the River Market establishments benefit from big crowds.

Hypocritical? Almost certainly, considering that the female wait staff is clad in tight black outfits that would seem to at least challenge the dress code. (Service was generally good on multiple visits, by the way.) 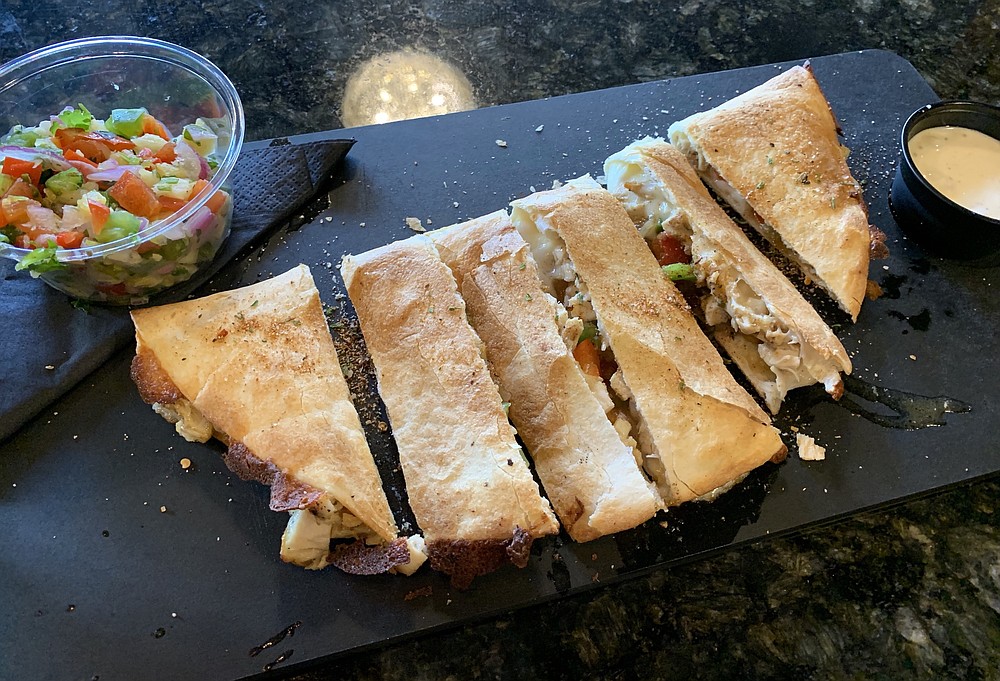 Anyway, that dress code is no longer in evidence and we are concluding that the management has backed off, or at least backed away, from it. Most, though not all, of the few customers we observed in the very early dinner hours we visited — the place must get more crowded later when there's musical entertainment and after the upstairs tiki bar opens at 8 — were at least respectably dressed. The bar customer in a white T-shirt with an Under Armor logo faced no challenge whatsoever upon entry.

Cannibal & Craft opened in October, a branch of a Fayetteville club. It's a two-tiered operation consisting of a street-level cocktail lounge (the "craft" side, you might say) and second-story Polynesian Tiki nightclub (the "cannibal" side). Downstairs, the decor combines elements of boardroom and hunting lodge, with wood paneling and three huge taxidermied animal heads on the wall behind the bar (moose, bison and deer, left to right, one per panel). Seating on the floor is at the very long bar; at a handful each of low and high dark-granite-topped tables (the former with deep wood-backed, black-padded chairs, the latter with wood-seated aluminum bar stools), with bigger tables, five booths and some conversation groups on a raised area that also includes the stage for the band.

Upstairs, the decor is mostly sea-blue, with booths — including one for the DJ — and a wide-open floor where, we guess, customers can dance if they are so inclined. There is, by the way, no food service upstairs, mostly because hauling plates up the very steep fire-escape-like metal staircase would be practically prohibitive. 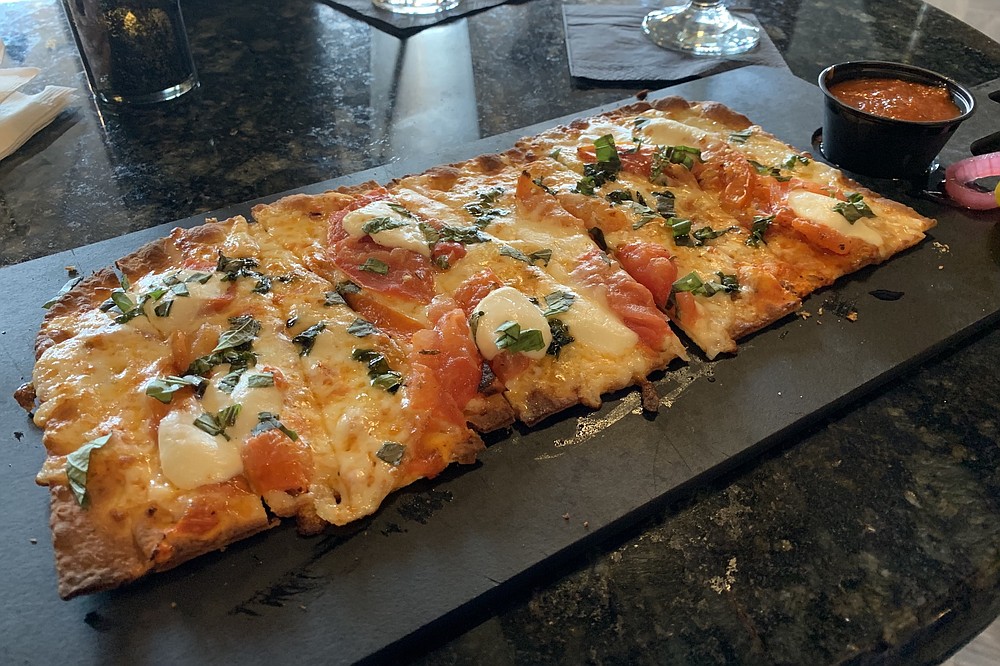 There are so many dining and drinking options in the River Market, many of them mediocre at best. So we were hoping that Cannibal & Craft had something extraordinary to offer. Alas, it doesn't.

The menu consists of upscale but pedestrian pub grub, with due credit to the kitchen for the work it puts into plate presentation. The three cocktails at least had the advantage of not being weak or watered down, but none of them were very exciting and two were expensive (the third we got at a happy-hour discount).

The Margherita Flatbread ($12), one of three pizza-like flatbreads (the others are Mushroom and Calabrese, each also $12) served on a wooden plank, is pretty simple: basil, tomato sauce, the "C&C cheese blend" (now reduced to one cheese, mozzarella), topped with blobs of fresh mozzarella. We would have enjoyed it more if it had been hot instead of tepid, which tells us it likely had been sitting for a bit before it made it to the table. The cup of marinara dipping sauce was cold — cold as if it had just come out of the fridge. 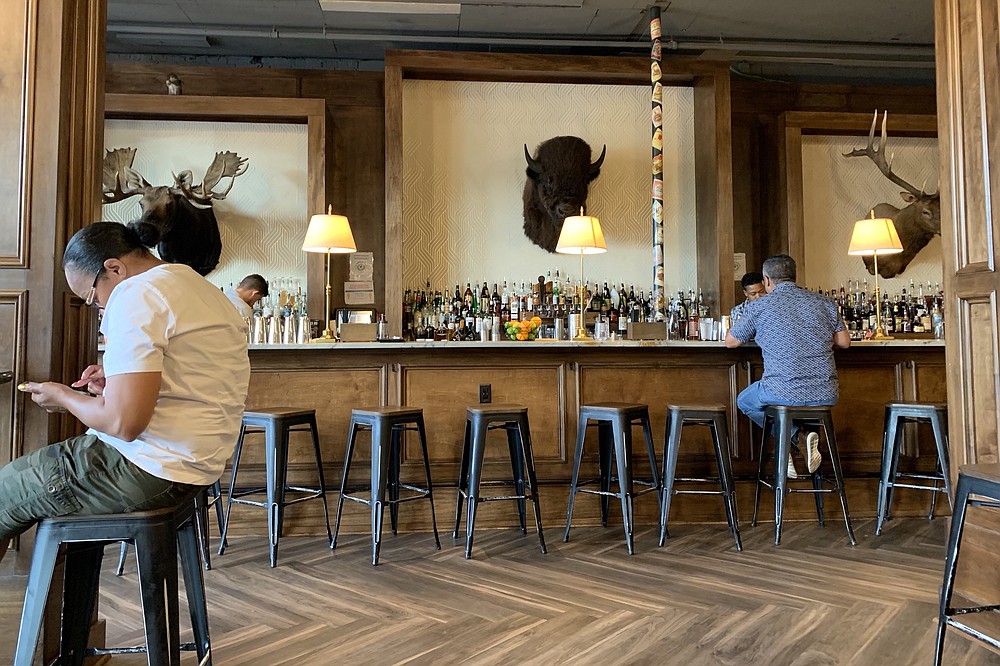 We took our server's suggestion that the Jerk Chicken Quesadilla ($12) was a worthwhile dish, which only enhanced our disappointment when it turned out to be somewhere south of ordinary. The "Jamaican jerk chicken" was on the better side of the moist-dry line, but we didn't taste much, if any, jerk seasoning — it was, pretty much, just plain chicken, folded into a crisped tortilla with bell peppers and caramelized onion, which provided enough fluid for some of it to leak out onto the board on which it was served, and the "C&C cheese blend" was blah.

We did, however, enjoy our Shrimp Chimichurri ($18), a revisit of a dish we tried as a to-go order for our Takeout Tastings series in December. It was just as tasty, and just as messy. (Separating sauced shrimp from their tails requires a stack of extra napkins.)

The shrimp in the to-go order had come, laid flat, in a foil wrapper; the in-house presentation, served on a plank, not a plate, was vertical and, we must admit, slightly alarming: five medium-size, tail-on shrimp, marinated and fully cloaked in a zippy green chimichurri sauce, came each on a wooden skewer with a cute little blue fishy at the un-pointed end. The pointed ends were stuck into half an orange, all draped in what the online menu says is arugula (we're not very good at identifying greens, so it could have been field greens or a spiky variety of lettuce) soaking in a basil Chianti vinaigrette. The kitchen draped a ring of pickled red onion over a pepperoncini pepper for a garnish. 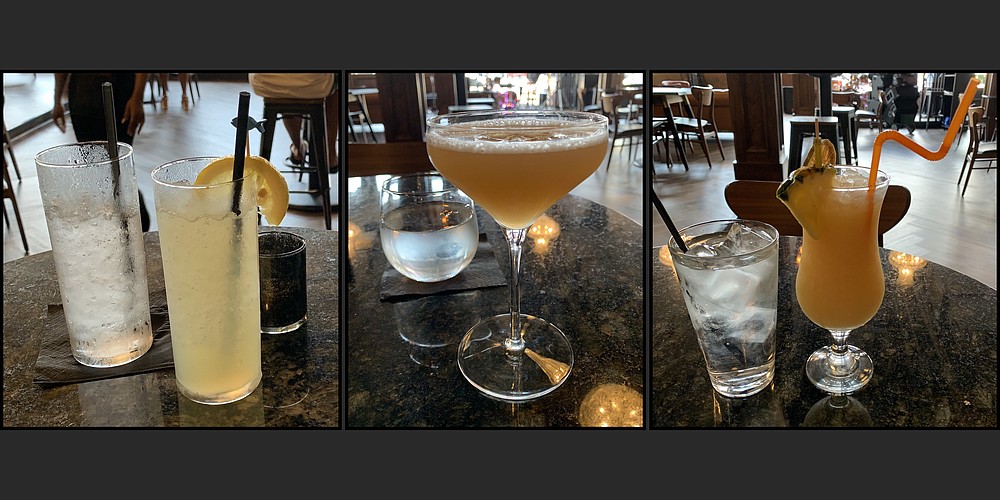 Cannibal & Craft's cocktail menu separates its offerings into three categories: Table Tap (including the Lavender Lemonade), Craft (including the Hemingway Daiquiri) and Tiki (including the Painkiller). (Arkansas Democrat-Gazette/Eric E. Harrison)

Cannibal & Craft's cocktail menu lists three categories. We tried one from each.

We gather that Table Tap cocktails come already mixed. Our Lavender Lemonade ($10, $5 at happy hour) consisted of lavender-infused vodka with "Craft standard cocktail mix." It made for a pleasant beverage and if you're looking for something fairly low in alcohol, this would be a good, if a somewhat unexciting, choice.

We would be hard pressed to imagine its namesake drinking the Hemingway Daiquiri ($12), one of the Craft cocktails, which blends gold rum, grapefruit juice, maraschino liqueur, lime juice and simple syrup. The grapefruit juice and the rum were the most prominent flavors; the syrup and liqueur helped provide a touch of sweetness to balance their bitterness. Similarly, pineapple juice was the prominent flavor in the Painkiller ($12), one of the Tiki cocktails, which also featured Guyanean rum, coconut cream and orange.

By the way, Cannibal & Craft exacts a surcharge on all credit-card purchases. In our case, it was about a dollar each time, but we didn't find out about it until we saw a notice on the check.