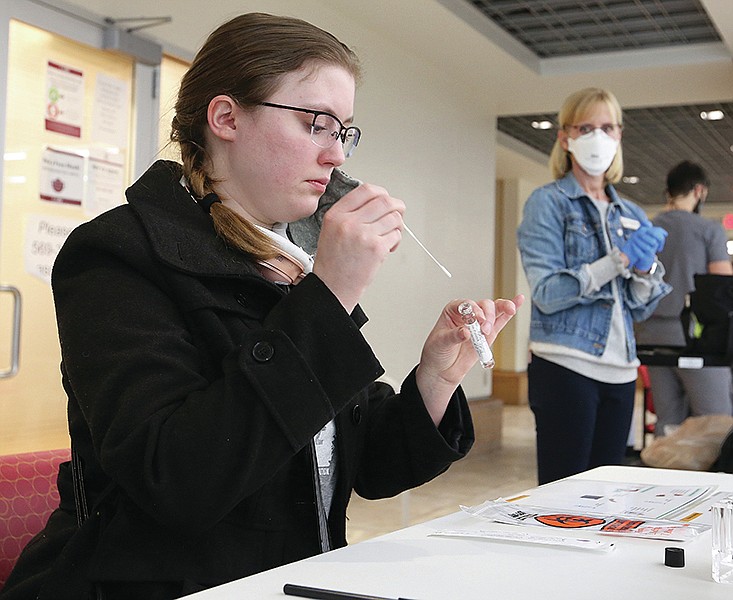 University of Arkansas at Little Rock graduate student Rebekah White puts her swab in a container after taking a covid-19 self-test as nurse Tracy England (right) looks on Thursday, Jan. 14, 2021, at the UALR Donaghey Student Center. UALR is offering surveillance testing for employees and students to identify asymptomatic coronavirus cases and determine the positivity rate for on-campus employees and students. (Arkansas Democrat-Gazette/Thomas Metthe)

An uptick in new coronavirus infections in Arkansas appeared to continue as the state's count of cases rose Wednesday by 389.

While smaller than Tuesday's spike of 485 cases, the increase Wednesday was larger than the one the previous Wednesday by just over 100.

After rising for the previous eight days, however, the number of people hospitalized in the state with covid-19 fell Wednesday by six, to 279.

The state's death toll from the virus, as tracked by the state Department of Health, rose by three, to 5,887.

"This increased level of cases can only be stopped by the COVID-19 vaccine. Right now, our activities are increasing at a faster rate than our vaccines. Let's return to normal, but please get a shot."

Already at its highest level since March 18, the average daily increase in the state's case count over a rolling seven-day period rose Wednesday to 273.

With new cases outpacing recoveries, the number of cases in the state that were considered active rose by 151, to 2,721, which was also its highest level since March 18.

The number of covid-19 patients in the state who were on ventilators rose by three, to 67, its highest level since March 11.

The number of virus patients in the state's intensive care units, however, fell for the second-straight day, going from 128 as of Tuesday to 122.

State Epidemiologist Jennifer Dillaha said she's "becoming more and more convinced" that the escalation in daily new infections is the result of the delta variant that first emerged in India.

She said the variant has been identified in Baxter County, which had a total of 43 new cases -- the second-most of any of the state's counties -- on Tuesday and 22 on Wednesday.

In nearby southwestern Missouri, the fast-spreading variant, along with low vaccination rates, has been blamed for a surge in cases and hospitalizations.

"That tells me that this kind of community spread, not just in Baxter but other places, [is] likely being fueled by the delta variant -- maybe not everywhere, but it is so highly transmissible that I think that pretty soon, we'll see it all over the state," Dillaha said.

She said recent clusters of cases have been linked to churches, travel and family reunions and other social events.

"We're seeing it in some worksites, some summer camps as well, but there are, I think, an increasing number of places where it's not really focused on one locale -- it's in the community," Dillaha said.

She said she expects the virus to continue spreading "until it has infected a large proportion of the population that is not vaccinated."

One worrisome indicator, she said, is the percentage of the state's coronavirus tests, including polymerase chain reaction, or PCR, tests and antigen tests, that are positive.

Over the seven-day span ending Tuesday, it was 8.1%, the highest percentage in several weeks.

"It tells me that there's spread -- there's a lot of spread in the community," Dillaha said.

According to weekly Health Department reports, the first cases caused by the delta variant in Arkansas were discovered late last month.

The week ending June 5, the cumulative number that had been found jumped from two to eight.

The number rose to 27 the next week and 32 last week, according to the latest report, released Monday.

The actual number of cases caused by such variants is unknown, however, because only a small percentage are sent to laboratories for the genomic sequencing required to determine that.

At Baxter Regional Medical Center in Mountain Home, infection preventionist Stephanie Free said Wednesday the number of patients coming into the emergency room with covid-19 had increased slightly to about three to five per day.

The hospital had four covid-19 patients who were hospitalized, including three who were in intensive care, which Free said has been typical for the past couple months.

"It's still not bad, but of course hospitalizations and [emergency department] visits are usually a little bit lagged behind the active cases," Free said.

"I anticipate that if we're going to see an increase, it might be in the next week or so."

She said the delta variant and the county's low vaccination rate were likely behind the recent increase in cases, which has come amid an influx of tourists visiting the county's lakes and rivers.

According to the U.S. Centers for Disease Control and Prevention, 37.2% of the county's residents had received at least one vaccine dose as of Wednesday, and 31.8% had been fully vaccinated.

"I think if more people can get vaccinated, and we can reach closer to that herd immunity, that will definitely help," Free said.

Mountain Home Mayor Hillrey Adams it's common for his city's residents to travel to Branson and Springfield, Mo., where cases have been surging.

In light of the growing number of cases in the county, he said he's talked to officials at Baxter Regional Medical Center about making another push for residents to get vaccinated.

"We're going to start reemphasizing and putting stuff out about it, trying to remind folks one more time," he said.

In Washington and Benton counties, hospitals were caring for 33 covid-19 patients, up from 30 a day earlier, a coalition of health care providers said in a statement.

"In NWA our hospitals have been close to full caring for patients with medical conditions other than COVID-19 but this month (June) we've tripled the number of COVID patients we are caring for, after having several months of low COVID-19 hospitalizations," the providers said.

"We have been caring for less than 30 COVID-19 patients since the beginning of March. We've now tipped over 30 patients. With our current trends, we are concerned those critical patient needs will only rise placing an undue burden on our health care workforce. Paraphrasing Birch Wright, [chief operation officer of Washington Regional Medical Center], 'Some of this could have been prevented by patients taking the vaccine. If you get the vaccine, the likelihood of you becoming hospitalized and/or critically ill is very, very low.'"

At 4,753, the increase on Wednesday in vaccine doses that providers statewide reported having administered, including second doses of the Pfizer and Moderna vaccines, was smaller by more than 1,100 than the one a week earlier.

The average number of doses administered each day over a rolling seven-day period fell to 4,555, the lowest level since the Health Department began publicly reporting daily vaccination numbers in January.

According to the CDC, the number Arkansans who had received at least one vaccine dose rose Wednesday by 1,950, to 1,246,153, representing about 41.3% of the state's population.

Nationally, 53.6% of people had received at least one vaccine dose, and 45.4% were fully vaccinated.

The cases that were added to the state's tallies on Wednesday included 258 that were confirmed through PCR tests.

The other 131 were "probable" cases, which include those identified through antigen tests.

Among prison and jail inmates, the Health Department's count of cases rose by one.

Department of Corrections spokeswoman Cindy Murphy said the Ouachita River Unit in Malvern had one new case among inmates.

A total of 17 cases at the prison were active as of Wednesday.

The number of people who have ever been hospitalized with confirmed infections in the state grew by 27, to 16,780.

The number who have ever been on a ventilator rose by one, to 1,712.