A howling good time in 'Werewolves Within' 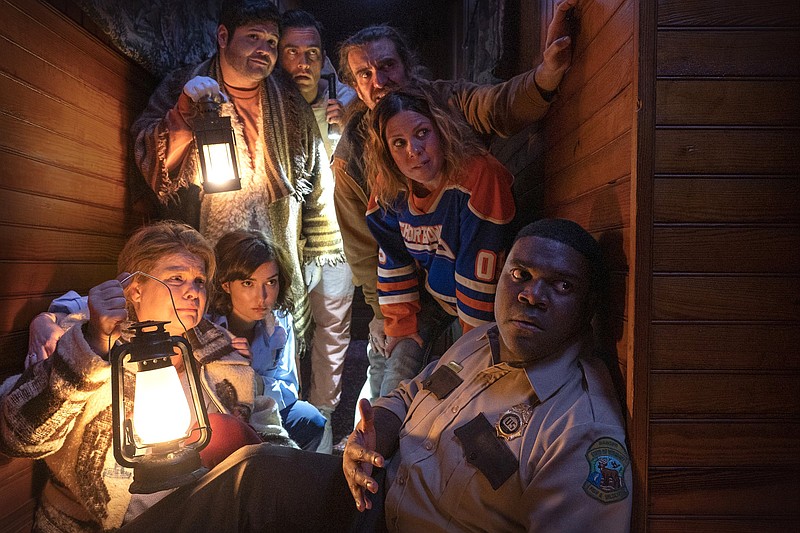 I have no interest in a scary movie. I don't like being terrified. But a good horror comedy like "Scream" or "Fright Night," can and will grab my attention. "Werewolves Within" falls into that category.

I was surprised to learn the film is actually a video-game adaptation, which would usually be a red flag. Translating video games to film almost never turns out well. I can think of three exceptions: "Detective Pikachu," "Sonic the Hedgehog" and "Silent Hill." The rest from "Super Mario Bros" to "Street Fighter" are nightmares of cinema.

But "Werewolves Within" is not a mainstream video game franchise like Super Mario Bros or Resident Evil. Instead, it's a virtual reality game released in 2016 with a very simple concept. A medieval town is being attacked by a werewolf, and the player has to figure out who it is.

The film follows a similar premise, but in modern times. The town of Beaverfield in rural New England is hit with a snowstorm, which causes a power failure. And to make matters worse, residents are being killed, seemingly by a werewolf.

Ironically, I've been on a little bit of a werewolf kick lately, having just finished reading Stephen King's "Cycle of the Werewolf."

"Werewolves Within" could've been an awful film if it had taken itself too seriously or gone for straight horror. But director Josh Ruben made the smart call to allow his movie to poke fun at the werewolf and murder mystery genres. The result is a genuinely fun mashup of "Schitt's Creek" and "Knives Out."

The film is kind of like 2019's "Ready or Not," in that it's a dark comedy that really sneaks up on the viewers and is surprisingly entertaining.

Sam Richardson plays a park ranger named Finn who's moving to Beaverfield for his new post. As the lead actor, Richardson is plenty charismatic. He's got the comedic chops of Kenan Thompson and the genuine spirit of kindness of Mr. Rogers. And the two blend well to create a friendly park ranger who is just trying to survive a werewolf attack while keeping townsfolk from killing each other in fear.

Then there's Milana Vayntrub who plays a postal clerk named Cecily. She's cute as a button and the perfect blend of quirky and town gossip. I liked her immediately. Cecily serves as a sort of sidekick for Finn during most of the movie, as she seems like the only other sane person in Beaverfield.

The rest of the characters are pretty much cardboard cutouts of the angry villagers. Normally, I'd dock a movie points for that. But it strangely works for "Werewolves Within" that the rest of the side characters are reduced to 2D caricatures of weird people you find in small towns. (I can write that because I'm from small towns like Flippin and Dover).

On the list of background characters you'll find a gay couple who own a yoga studio, an isolationist trapper, a scientist, craft enthusiasts, an oil tycoon, an innkeeper, and a few rednecks. Everyone on that list is a stereotype unto themselves, and it's almost like the viewer is playing a video game, trying to figure out who the werewolf is. It's also kind of like the old "Guess Who?" board game.

Throughout "Werewolves Within," the aforementioned character list will thin significantly. At the start of the film, my wife and I labeled which characters we thought would turn out to be the werewolf. I won the bet.

I was constantly surprised by how intelligent the movie kept its murder mystery. There's even a point where I started to question if Beaverfield had actually been visited by a werewolf, or if the entire thing had been Scooby Doo'd.

"Werewolves Within" is really a callback to earlier monster movies -- just a fun cinematic experience that people can enjoy without being too terrorized. There aren't really any jump scares in the film.

I actually lycan (heh) the film to 1990's "Tremors" with Kevin Bacon, Fred Ward and Reba McEntire. These aren't quite what I'd call a B movie like "The Evil Dead," but they definitely have some of that same vibe. You have a lot of practical effects instead of CGI, maybe some lower-tier actors (no Scarlet Johansson here), and a monster that, while not scary, is still a recognizable threat to one group's safety.

When we finally did see the werewolf, my wife remarked it was a relief the movie studio went with a more old fashioned monster form. There's almost an Abbott and Costello quality to the creature's design. And the person who ends up being the werewolf wears it well.

Matthew Wise is credited with the cinematography, and he included some neat creative angles and fast zooms that help "Werewolves Within" to be more stylish than others might have made it, especially when you consider this is a monster movie and an adaptation of a video game.

"Werewolves Within" is just smarter and more fun than it has any right to be. Audiences should have no trouble rooting for ranger Finn to survive the werewolf attack.

At just 97 minutes, the film is paced really well. It doesn't feel too short or too long. The movie seems just right for the simple tale it tells.

"Werewolves Within" isn't going to have as wide a release as "F9" has today, but some Arkansas theaters will pick it up (I can't know because I'm writing this on a Monday morning). If you can't catch the movie in theaters, it'll be available for streaming on July 2. So one way or another, you should track down this movie.

Print Headline: A howling good time in 'Werewolves Within'