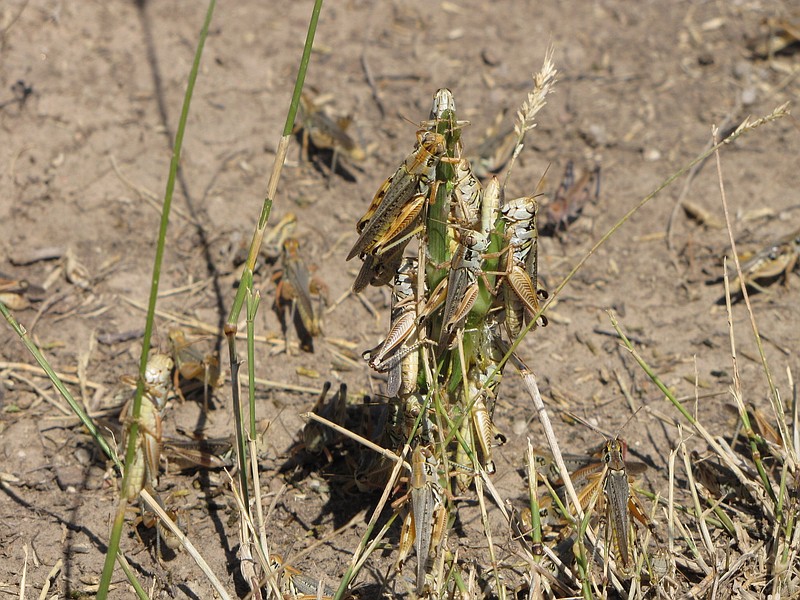 Grasshoppers cover a plant in this undated handout photo provided by the U.S. Department of Agriculture. Federal agriculture officials are starting what could be the largest grasshopper-killing campaign since the 1980s amid an outbreak of the drought-loving insects that cattle ranchers fear will strip bare public and private rangelands. (AP)

BILLINGS, Mont. -- A punishing drought in the U.S. West is drying up waterways, sparking wildfires and leaving farmers scrambling for water. Next up: a plague of voracious grasshoppers.

Federal agriculture officials are starting what could become their largest grasshopper-killing campaign since the 1980s during an outbreak of the drought-loving insects that cattle ranchers fear will strip bare public and private rangelands.

In central Montana's Phillips County, more than 50 miles from the nearest town, Frank Wiederrick said large numbers of grasshoppers started showing up on prairie surrounding his ranch in recent days. Already they're beginning to denude trees around his house.

"They're everywhere," Wiederrick said. "Drought and grasshoppers go together and they are cleaning us out."

Grasshoppers thrive in warm, dry weather, and populations already were up last year, setting the stage for an even bigger outbreak in 2021. Such outbreaks could become more common as climate change shifts rainfall patterns, scientists said.

To blunt the grasshoppers' economic damage, the U.S. Department of Agriculture this week began aerial spraying of the pesticide diflubenzuron to kill grasshopper nymphs before they develop into adults. Approximately 3,000 square miles in Montana are expected to be sprayed.

Agriculture officials had seen this year's infestation coming, after a 2020 survey found dense concentrations of adult grasshoppers across about 55,000 square miles in the West. A 2021 grasshopper "hazard map" shows densities of at least 15 insects per square yard in large areas of Montana, Wyoming and Oregon and portions of Idaho, Arizona, Colorado and Nebraska.

Left unaddressed, federal officials said, the agricultural damage from grasshoppers could become so severe it could drive up beef and crop prices.

The program's scale has alarmed environmentalists who say widespread spraying will kill numerous insects, including spiders and other grasshopper predators as well as struggling species such as monarch butterflies. They're also concerned the pesticides could ruin organic farms adjacent to spray zones.

"We're talking about natural areas being sprayed, this is not cropland," said Sharon Selvaggio, a former U.S. Fish and Wildlife Service biologist now with the Xerces Society, a conservation group focused on insects.

Government officials say they will spray pesticides in low concentrations and reduce the area treated by alternately spraying a strip of rangeland, then skipping the next strip. The intent is to kill grasshoppers passing between strips while sparing other insects that don't move as far.

If spraying is delayed and grasshoppers grow larger and more resilient, federal officials could resort to two more toxic pesticides -- carbaryl and malathion, according to government documents.

Selvaggio said pesticides could drift into areas not being targeted and kill beneficial insects such as bees that pollinate crops. "The toxicity is more than enough to kill bees," she said. "This is not adequate protection."

Organic farmers are divided on spraying. Some are concerned about losing their organic certification for years if they inadvertently get pesticides on their crops, while others are willing to tolerate spraying out of deference to their neighbors' problems, said Jamie Ryan Lockman, director of Organic Montana.

The trade group isn't going to challenge the spraying but wants organic farmers protected and for the government to research alternatives to chemicals for future outbreaks.

As this year's crop of grasshoppers emerges, they're starting to compete with cattle for food in arid eastern Montana, where single ranches can sprawl over thousands of acres of private and public rangeland.

The grasshoppers start eating tender plants first, then move on to fully-grown plants and the seed heads of grain crops, killing them, said Marko Manoukian, a Montana State University agriculture extension agent in Phillips County. Farmers can collect insurance on damaged crops, whereas ranchers have no recourse when the grasshoppers remove vegetation from public lands.

"They are competing against our food supplies," said Manoukian.

A typical infestation can remove 20% of forage from the range and have a $900 million impact, according to a 2012 University of Wyoming study cited by federal officials.

At his ranch, not far from the Charles M. Russell National Wildlife Refuge, Wiederrick is preparing to sell up to 70% of his cows this summer because he fears they won't have enough feed.

The federal government's grasshopper program dates to the 1930s, when infestations covered millions of acres in 17 Western states. After locally-led efforts failed, Congress put the Agriculture Department in charge of controlling the insects on federal rangeland.

The last outbreak on a scale comparable to this year lasted from 1986 to 1988. Almost 20 million acres were treated with 1.3 million gallons of malathion, according to researchers.

The grasshoppers targeted include roughly a dozen of the hundreds of native species in the West. Drought benefits them in part because it lessens exposure of grasshopper eggs to deadly parasites that need moisture, said Chelse Prather, a University of Dayton insect ecologist.

This year's outbreak will peak in roughly two months, Prather said, when the insects reach 2 to 3 inches in length and become so prevalent they'll start to eat more plant matter than cattle can.

The grasshoppers start to die down when there's nothing left to eat, Prather said, "but at that point they've probably already ... laid their eggs for next year." 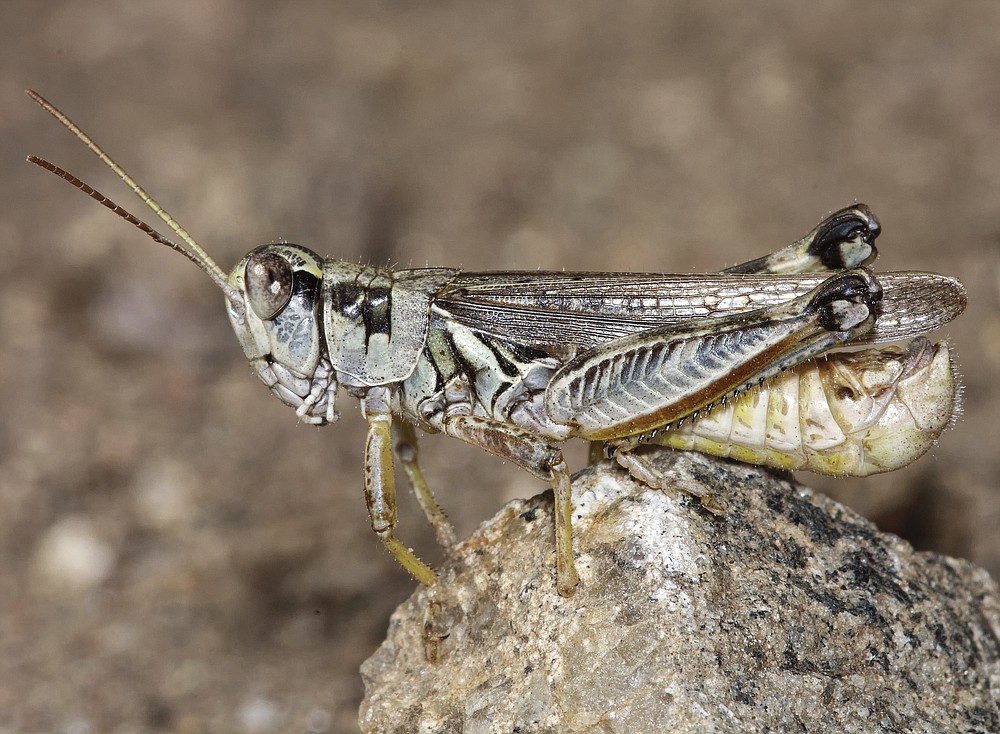 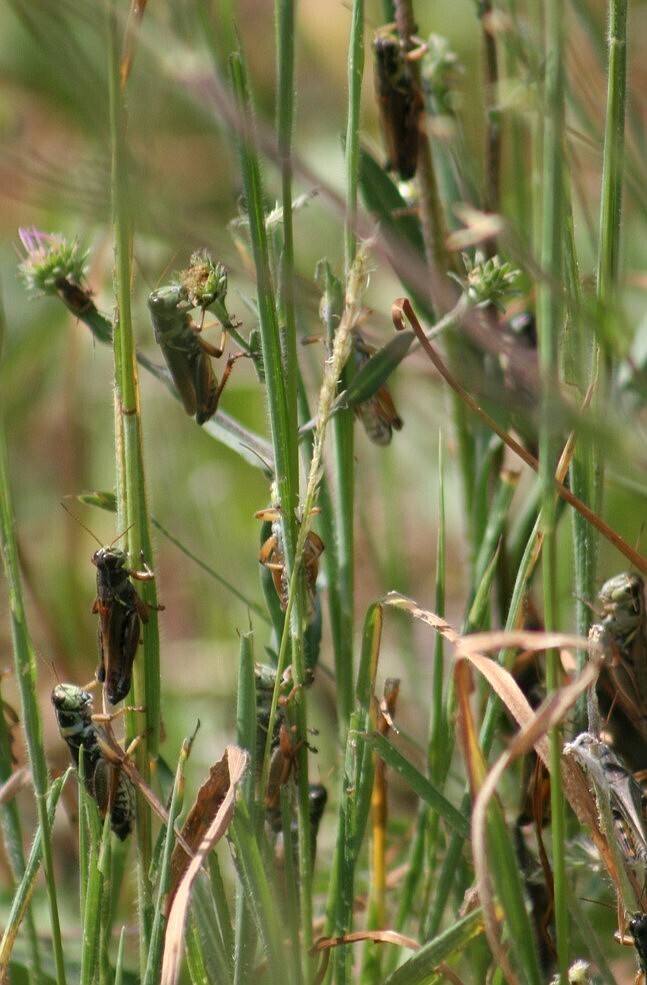