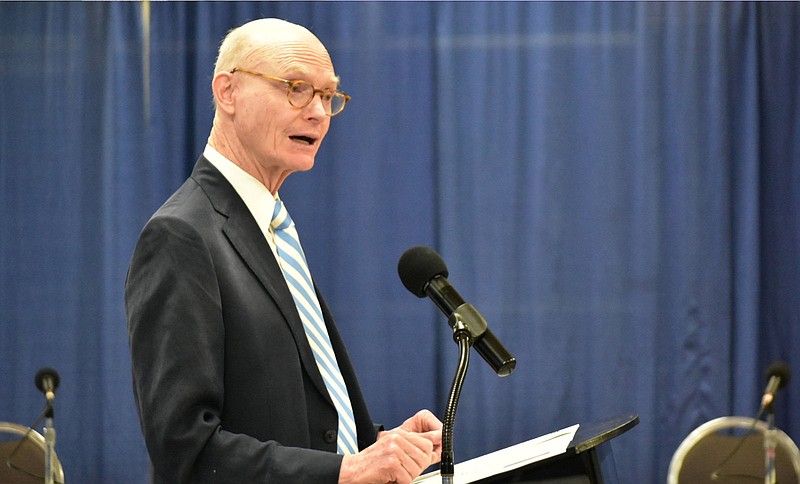 WEHCO Media, Inc. President Walter E. Hussman, Jr. on Thursday made a "gig announcement," as the sign near a podium at the Pine Bluff Convention Center suggested.

The media company, which owns the Arkansas Democrat-Gazette and Pine Bluff Commercial, has invested $2.1 million into upgrading the city's internet infrastructure to offer Cablelynx Broadband gigabit service to every resident and business in the service area. The goal of the service is to boost download speeds up to 1 gigabit, or 1,000 megabits, per second by July 2022 and make Pine Bluff a "gig city."

The first step of the system upgrade, however, is increasing service speeds and data allowances so that up 250 to megabits per second will be available throughout Pine Bluff Cable TV by the end of July 2021. Additional plant construction will begin this summer, according to a news release.

"We think Pine Bluff has got a good future," Hussman said. "To really accelerate that, we think Pine Bluff needs to be a gig city. They need to be able to tell any economic prospects, 'Yeah, we've got the 1-gigabit service.'"

A large part of the $2.1 million investment calls for the purchase of new internet amplifiers throughout Pine Bluff, according to Hussman. Pine Bluff Cable TV reaches up to 99% of households within the city.

"The low nodes are where the fiber goes and stops at a node, and from there we run an amplifier into the homes," Hussman said. "We're replacing the nodes, and there's a lot of labor to that. That's a big part of the cost, too. The first customers this will be available to is the businesses in Pine Bluff, but it'll soon be available by the end of July next year to everyone."

WEHCO has been investing in Pine Bluff "for a while," Hussman said, using the family-owned company's purchase of Pine Bluff Cable TV in 1974 and the purchase of the Pine Bluff Commercial last September as some examples.

Mayor Shirley Washington said after Hussman's announcement that the city "couldn't be more thrilled" about the investment at a time when capital upgrades and new buildings and businesses are being constructed.

"Thank you. Thank you so very much to all of you who made this possible," Washington said. "There's truly no better time for this update than right now, at this time when we're having so many demands for high speed internet for our people working from home and from school. As you all know, Pine Bluff is growing."

Washington added that a good broadband infrastructure is one of the basic necessities a community needs to thrive.

"Therefore, for Pine Bluff to continue growing, our broadband must be accessible, it must be affordable, and it must be efficient," she said. "Investments like the one you're making today are exactly why we need to make all of this a reality."

As of April 2019, 80% of U.S. homes had access to internet service offering speeds up to 1 gigabit per second, according to ExploreBeyond.org.

"It's super, super fast," Hussman said. "It's probably super-fast than anyone needs in a residence, unless they're doing a lot of 24-hour gaming or whatever. As I explained, I think my service is at 200 megabits a second in Little Rock. I stream movies. I send photos. I send videos. I never have a delay."

The current maximum download speed on Pine Bluff's system is 150 megabits, according to WEHCO Vice President and Regional Manager Chuck Launius. He explained that a gigabit is the same as a gigabyte, which is the amount of data (1,000 megabytes), but measured in per-second download and upload speed.

"It's real popular with high-end gamers," Launius said of gigabit service. "It's also popular with work at home. People have a lot of data to move back-and-forth between their jobs, so it has both entertainment and job application."

The 250-megabit capacity Pine Bluff Cable TV is looking to reach by the end of next month is 10 times the Federal Communications Commission definition of high-speed internet, Launius said.

WEHCO and Pine Bluff Cable TV officials say the gigabit service will not increase customer rates and no modems have to be replaced unless they do not meet updated standards. Once upgrades begin, about 30 to 40 customers at a time will notice about a 30-minute outage in internet service between midnight and 6 a.m., Launius said.

"We're not looking at an increase in pricing at all," Pine Bluff Cable TV General Manager Jeremy Galloway said. "So, what the subscribers are seeing at the intro rates, the contractual rates, special promos, that remains the same. There's no change there. We're not looking at an increase down the road, either. Internet is what's driving the world, and that's where we're putting our focus and why we're making this investment."

What gigabit service looks like, Galloway said, is taking a "strain" off subscribers in the covid-19 era where many have had to work or attend school virtually.

"Well, we're not a broken system, but with all cable systems that are providing the internet, you see a bend, and this will alleviate that bend," he said. "This will allow these subscribers to will work from home, [attend] remote school, [and provide service that is] more fluid, less interruption, Zoom meetings. You're looking at high-quality video, and you can do this simultaneously while everyone at the business or at home continues to do what they need to do."