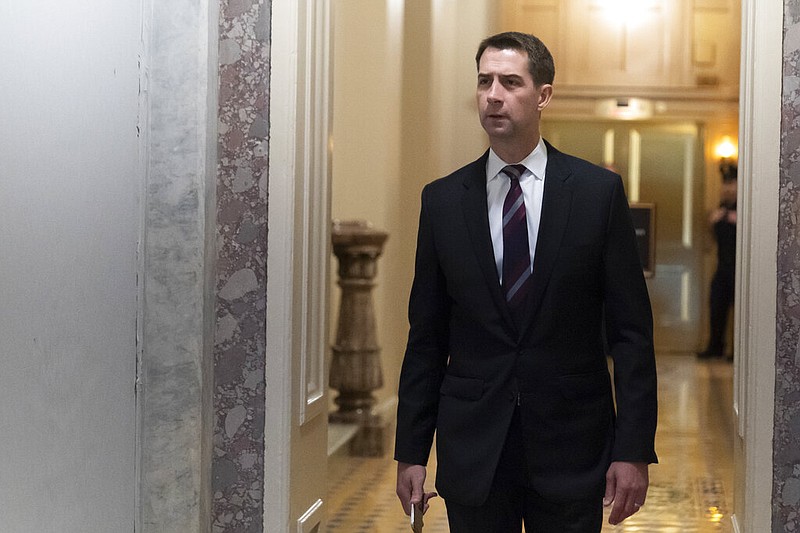 Sen. Tom Cotton, shown walking in the Senate on Tuesday before a vote, said Friday in a speech to the National Press Club that the United States needs “more space in our prisons to keep our innocent citizens safe.” (AP/Alex Brandon)

WASHINGTON -- U.S. Sen. Tom Cotton, R-Ark., on Friday called for increased spending on "police, prosecutors and prisons," arguing that the nation is being too lenient on lawbreakers.

Citing increases in violent crime, the lawmaker from Little Rock called for a "once-in-a-generation investment in police salaries, training and equipment with a goal of putting 100,000 new officers on the street."

Coming up with the funding shouldn't be difficult, he told an audience at the National Press Club.

"There's no shortage of money out there. I mean, the Congress just gave, state and local governments $350 billion," Cotton said after delivering his prepared remarks. "Our states are awash, awash, in money, and Arkansas has a billion-dollar surplus."

The $350 billion was included in the $1.9 trillion American Rescue Plan Act of 2021, which passed the House and Senate in March despite united Republican opposition.

Extra funds are needed, he said.

"Last year, the United States experienced the largest single-year increase in murder on record and the most drug-overdose deaths in our nation's history. Murder nationwide rose by an astonishing 25%, aggravated assaults increased in 56 of the 66 largest American cities, and 88,000 of our fellow Americans lost their lives to drug overdoses," he said.

In his speech, Cotton accused big city Democratic mayors and the "Defund the Police" movement of undermining public safety.

"Radicals," he said, have "defamed, demoralized and disarmed" law enforcement.

"Portland announced that it would no longer allow its police to use tear gas against violent demonstrators. The Seattle and Philadelphia city councils voted to ban the use of pepper spray. Many other cities limited the use of rubber bullets," Cotton said.

Many cities have cut their police budgets, he said.

"It's no surprise that in such a toxic environment, police retirements surged," he said.

Locking up more criminals would be a step in the right direction, Cotton said.

"At root, we need more space in our prisons to keep our innocent citizens safe," he said.

In May 2016, Cotton rejected claims that the United States incarcerates too many people, saying, "If anything, we have an underincarceration problem."

The statement, at the time, was controversial, he noted Friday.

"Woolly headed critics across the political spectrum condemned me for saying this. But I was right then, and I'm right now," Cotton said.

The Democratic Party is "pro-riot, anti-cop and anti-prosecutor," he said.

"Democrats today have more sympathy for violent criminals than for innocent victims," he said.

"He would much rather use hot button talking points and generalizations and be intellectually dishonest with the people that vote for him. He is the epitome of what is wrong with America today," Gray said.

Reihan Salam, the institute's president, portrayed Cotton as a visionary, telling the crowd, "No leader in public life has exhibited more foresight and more courage on this issue than Sen. Cotton."

Cotton is due to address the annual National Right to Life convention this evening in suburban Washington, D.C. Tuesday, he is set to appear in Sioux Center, Iowa, with that state's two Republican U.S. senators, Chuck Grassley and Joni Ernst.

Iowa traditionally has been the site of the first-in-the-nation presidential caucuses. Cotton hasn't yet said whether he intends to run for his party's nomination in 2024.