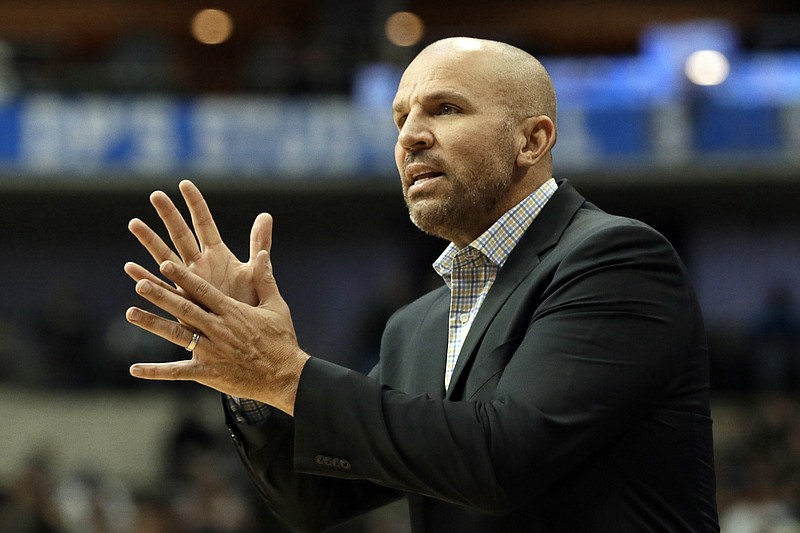 FILE - In this Nov. 18, 2017, file photo, Milwaukee Bucks head coach Jason Kidd looks at an official after a foul was called against his team in the second half of an NBA basketball game against the Dallas Mavericks in Dallas. Kidd is coming back to Dallas again, this time to replace the coach he won a championship with as the point guard of the Mavericks 10 years ago. A person with direct knowledge of the agreement says Kidd and the Mavericks agreed on a contract Friday, June 25, 2021, eight days after Carlisle resigned abruptly in the wake of general manager Donnie Nelson’s departure. (AP Photo/Tony Gutierrez, File)

DALLAS -- Now that the only coach who won an NBA title for the Mavs is gone, it seems not a little coincidence that the only point guard who did the same will succeed him.

Probably doesn't hurt to go a little old school, but that's not what the hiring of Jason Kidd is all about. Sure, he's a born-and-bred Maverick. And it no doubt helps your candidacy being familiar with the, uh, eccentricities of owner Mark Cuban.

Just the same, Kidd's hiring isn't a throwback to when the Mavs were kings. It's a nod to where the league is these days.

Players run the league more than ever, and the addition of Kidd and Nico Harrison as general manager constitutes a shoutout to any and all superstars, both at home and abroad.

Start with the impact on Luka Doncic, who's already a fan of the new coach. Rick Carlisle made an astute observation about the pair on his way out the door. Both are basketball savants. Luka is more talented, particularly as a scorer, but Kidd was just as entertaining because of how he imagined his way around a court.

He could put the finishing touches on Luka's ascendance. And Luka would listen because of his respect for Kidd's Hall of Fame career, still fresh in the kid's memory.

Besides Carlisle's recommendation, Kidd also received a recent endorsement from Damian Lillard. In fact, if Lillard hadn't pushed so hard, Kidd might be coaching Portland instead of Dallas.

Giannis Antetokounmpo liked Kidd so much, he offered to intercede on his behalf when the Bucks were about to kick Kidd to the curb.

Hiring Kidd doesn't necessarily mean Dame or the Greek Freak or LeBron James, another Kidd fan, will one day end up in Dallas. But it doesn't hurt the Mavs' chances, either. Same with Harrison, a former star at Montana State who once dreamed of being a doctor. At Nike, Harrison played a key role in the rehabilitation of Kobe Bryant's image after sexual assault charges against the Laker star were dropped. Harrison also forged relationships with players across the NBA, as evidenced by the stream of congratulations on Twitter.

For all you critics who complain that Cuban can't close the deal with free agents, the Mavs now boast the best recruiting staff outside Tuscaloosa.

Of course, even those credentials may not be enough to attract stars. Dallas is still a long way from a coast that counts. Don't get me wrong, I was born here. But Luka might be this city's best natural resource.

Frankly, I'm still trying to wrap my head around the fact that Carlisle walked away from his best shot at winning another title before he hangs it up. He's on record that he thinks Luka will win a championship, and I believe him. There's not a player on Indiana's roster close to Luka's talent. But Carlisle also knew it wasn't in the cards for him and Luka, and maybe he figured it finally might be at Kidd's third stop.

Speaking of which, Kidd's coaching record doesn't exactly blow you away. He's put in five years as a head coach and has a .491 winning percentage to show for it. His last season at Milwaukee, the Bucks were 23-22 when they let him go.

The next season, Mike Budenholzer won 60 games and coached the Bucks to the Eastern Conference finals.

Budenholzer is a branch on the Gregg Popovich coaching tree. Once upon a time, those roots ran deep in the NBA. Pop is one of the greatest coaches in NBA history. He also hasn't made the NBA Finals since two years before Tim Duncan retired. Since the Spurs' last championship in 2014, Steve Kerr (five) and Ty Lue (three) have made the most appearances in the Finals. The last two titles have been won by Nick Nurse and Frank Vogel. Not exactly Red Auerbach and Phil Jackson.

Coaching in the NBA is harder than ever these days. Not only do you need to win, you've got to keep your superstars happy, too.

The Mavs can't afford to squander any more MVP-type seasons from Luka, which is what makes this hire so pivotal.

No, Kidd's record isn't impressive. But, before he won four World Series titles with the Yankees, Joe Torre wasn't even a .500 manager. Sometimes it just takes the right fit to make it work.