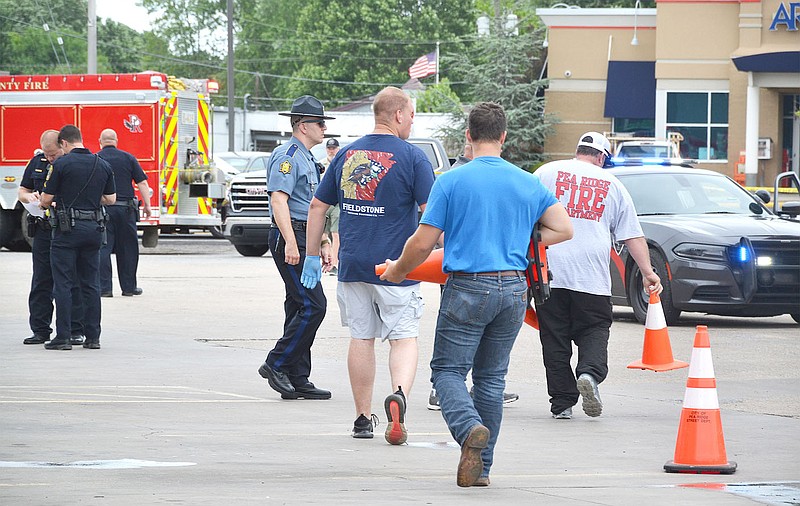 Police, deputies and emergency personnel cordoned off the White Oak station parking lot and surrounding area Saturday afternoon after a Pea Ridge Police officer was struck while on duty. The incident is being investigated by Benton County Sheriff's deputies.

PEA RIDGE — Residents of this northeast Benton County town planned to spend today celebrating freedom with a parade and fireworks, but two words changed that.

Pea Ridge police officer Kevin Apple was killed shortly after noon Saturday when a vehicle he had approached to speak with the driver ran him over and dragged him, according to authorities at the scene.

Shawna Rhae Cash, 22, of Pine Bluff and Elijah Anadoloza Sr., 18, of Bella Vista have been arrested in Apple’s death, according to reports. Both were being held in the Benton County jail Saturday night on charges of capital murder or attempted capital murder.

Gov. Asa Hutchinson said in a Saturday night tweet that he was saddened to hear of Apple’s death and that he had ordered flags to be flown at half-staff in honor of the slain officer.

“My prayers are with Officer Apple’s family and the entire Pea Ridge community during this time,” the governor said in his message.

Apple and fellow officer Brian Stamps answered a call about 11:30 a.m. Saturday to be on the lookout for an older model blue Jeep fleeing from Rogers police officers.

Apple, a 23-year law enforcement veteran, and Stamps saw the Jeep at a White Oak convenience store about 12:09 p.m., according to Lisenbee. They parked on either end of the Jeep, which was parked at the store’s gas pumps.

When they attempted to speak with the occupants, the Jeep rammed one of the police vehicles, then drove over Apple and fled, Lisenbee said.

Stamps shot at the Jeep, according to reports.

The Jeep was pursued by officers from multiple agencies, including the Benton County sheriff’s office, said Sheriff Shawn Holloway.

“The suspects were apprehended in Bella Vista,” Lisenbee said.

Two police cars, one with front-end damage, sat parallel to the gas pumps at the convenience store.

Soon after the “officer down” call went out, police officers and emergency personnel from neighboring agencies, including Rogers, Little Flock and Bella Vista quickly converged on the scene. Pea Ridge officers were escorted from the scene to a private place.

Pea Ridge Police Chief Lynn Hahn soon arrived at the scene. He said the Benton County sheriff’s office would be handling the investigation.

Holloway said deputies will take care of all law enforcement calls in Pea Ridge for a time to allow Pea Ridge officers time off.

“He certainly has honored his community by sacrificing his own life in their service,” Benton County Prosecuting Attorney Nathan Smith said during an afternoon news conference. “We want to honor him.”

The city’s Freedom Fest and summer parade, both scheduled for this weekend, were canceled.

A candlelight vigil for Apple was held Saturday night in the city park.