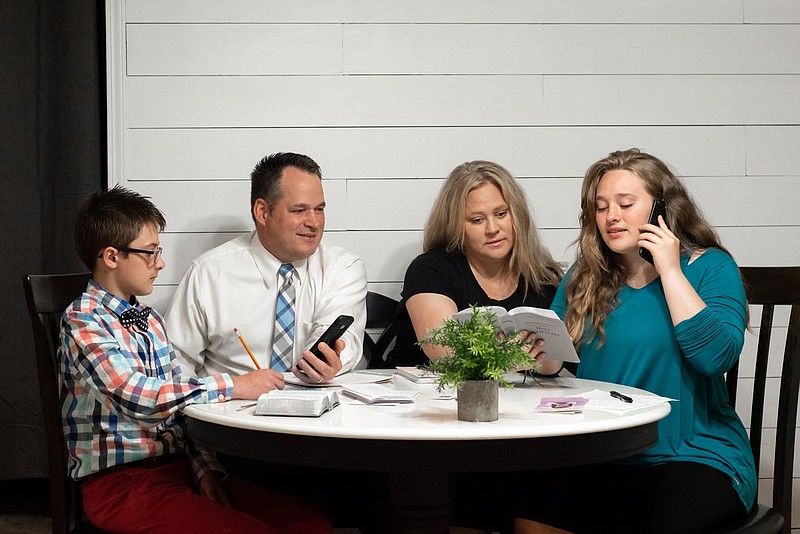 Evan Parsons (from left), his parents, Chad and Sarah Parsons, and sister Abbi Parsons make phone calls to reach the public with a message of faith in lieu of knocking on doors during the coronavirus pandemic. The Parsonses, who live in Searcy, are among the 1.7 million Jehovah’s Witnesses in the U.S. who have shifted away from the longtime practice of meeting people face to face to evangelize. (Special to the Democrat-Gazette)

Until last year, Chloe Crouch of Mena, a Jehovah's Witness, walked door to door to talk with people about her faith.

"We are trying to follow Jesus' command, go forth and make disciples, one on one," said Crouch, referring to Matthew 28. "That's how we've always felt we were commissioned [to act]."

The Witnesses are one of the faiths that practices visiting the public by knocking on doors. Similar to the missionaries of the Church of Jesus Christ of Latter-day Saints, Witnesses' face-to-face communicating ended abruptly in March of last year when the covid-19 pandemic took hold in the United States.

More than a year later, Witnesses are continuing to evangelize through other means, most often by calling and writing letters, as they face an uncertainty: Will the pandemic result in permanent changes to how they share their faith?

The question is one of many that religions are facing as shifts to online and outdoor worship and drive-thru food pantries and other physically distanced missions aren't going away any time soon. Having recently surpassed 600,000 deaths due to the coronavirus, the United States has increased its efforts to get people vaccinated, yet variants of the virus are actively spreading.

The move away from evangelizing on doorsteps "has been a very deliberate decision based on two principles: our respect for life and love of neighbor," spokesman Robert Hendriks said in a statement. "But we are still witnesses and, as such, we must testify about our faith. So it was inevitable that we would find a way to continue our work."

Chad and Sarah Parsons of Searcy estimate that in a given day before the pandemic, the two might cover up to 100 miles driving and walking in rural territories to visit people at their homes. The morning would see the couple meet new people on their doorstep, Bible in hand.

A few hours in the afternoon would be devoted to return visits to those interested in further discussion about the faith, which believes in an eventual ending of the current world in place of an eternal paradise on Earth, restored by Jehovah, the father of Jesus Christ.

These days, the Parsonses and their daughter, Abbi, 16, and 12-year-old son, Evan, call area residents whose contact information they've been able to find online, and write letters to others. The family isn't new to this type of evangelizing, but Chad Parsons said there nevertheless was an adjustment.

"We took the time to figure out the best way to gather addresses and the people who live there," Chad Parsons said. "Our goal isn't just to reach the masses; these are our neighbors, this is our community. The learning curve was keeping [contact information] organized and [making] sure we were reaching the right people in the right homes."

According to Hendriks, last year nearly 51,000 people in the U.S. requested that a Witness reach out to them through a congregation in their area or through the faith's website. The Parsonses now respond to requests in their area by also writing letters and making phone calls.

"Our love for our neighbors is stronger than ever," Hendriks said. "In fact, I think we have needed each other more than ever. We are finding that people are perplexed, stressed and feeling isolated. Our work has helped many regain a sense of footing -- even normalcy -- at a very unsettled time."

Jehovah's Witnesses also have not returned to other pre-pandemic practices. Adherents are still not worshipping together in person, taking their direction from the faith's worldwide headquarters in New York.

According to Crouch, construction on Kingdom Halls -- the name for the buildings where Witnesses gather -- have ceased except for projects that are vital to a structure. Public information carts where Witnesses would keep informational pamphlets on display haven't resumed and are still sent by mail, she said.

The church has no current plans to send Witnesses to resume door-to-door evangelizing, and the Parsonses plan to continue making calls and writing letters as a primary mode of outreach during the pandemic.

"I feel like there are more people that are open to listening to Scripture, [or] an encouraging thought, because of all that's going on," Chad Parsons said. "This really is a crazy time, during this pandemic."

"I have found that people are scared, and they're confused about the conditions in the world right now, and they're seeing the evidence that we're living in the last days," Sarah Parsons said, referring to the faith's belief in end times.

She also said the family -- and Witnesses in general -- miss the opportunity to interact with community members.

"If and when that day comes when we get to go door to door [again], we're going to be so happy, but in the meantime we're going to take every opportunity to reach our neighbors and keep trying to encourage them," she said.