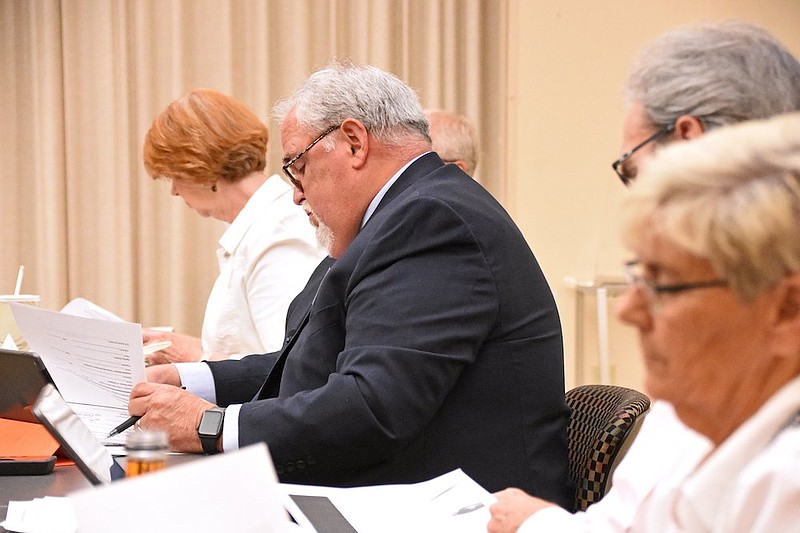 Andy Altom, board chair of the Child Welfare Agency Review Board, and other board members review the agenda for request of alternative compliance during the meeting Thursday, June 24, 2021 at the Department of Human Services in Little Rock. (Arkansas Democrat-Gazette/Staci Vandagriff)

An edict to move 11 children in the care of a Little Rock inpatient mental health care facility because of a licensing dispute was paused Thursday afternoon by a state oversight board.

Ezell Breedlove, an employee of the Placement and Residential Licensing Unit, arrived at the facility late Wednesday afternoon and told Centers for Youth and Families staff members that they had until the next day to move the kids in psychiatric care at Destiny House, one of four buildings on the center’s campus on 12th Street.

The nonprofit center has two licenses, one for the Elizabeth Mitchell Centers to operate a psychiatric residential treatment center for youths, and the other for Destiny House to operate an emergency shelter facility on the same campus. The 11 children at Destiny House were receiving residential psychiatric care rather than emergency services, said Ebony Russ, Placement and Residential Licensing Unit program manager for the state.

Members of the Child Welfare Agency Review Board voted Thursday to grant Centers permission to keep the children at Destiny House for 60 days, until the board meets again and determines a more permanent solution.

“I don’t think one of us needs to jump for a knee-jerk — we’ll probably need to do something very deferred so that we have a chance to make sure everybody is safe and look into this,” said board member Sandi Doherty, who is program administrator for the state’s Division of Children and Family Services.

“Because I have to have a lot more before I’m going to make a decision on this,” Doherty said. “I don’t want children moved or whatever if they’re not in danger.”

The licensing issue arose as Centers for Youth and Families faces state scrutiny because of allegations that its staff used physical restraints that broke kids’ bones; had at least one suicide attempt; and had sexual contact between unsupervised youths. Since May, the nonprofit’s leadership agreed to a corrective action plan requested by the Arkansas Department of Human Services, and the board issued a letter of reprimand to Centers.

Psychiatric residential treatment facilities (PRTFs) face different licensing requirements from emergency shelters, including stricter staffing ratios and mandates on building features. For example, blinds with cords or areas with sharp edges aren’t allowed in psychiatric facilities because youths could use those to hurt themselves, said Amy Webb, a Department of Human Services spokeswoman.

Centers officials believe that facility’s psychiatric care license applies to all buildings on the campus, which are at the same address on 12th Street, said attorney Ashley Hudson of the Kutak Rock law firm, which represents Centers. Hudson, a Democratic state representative from Little Rock, has also introduced herself as the corporate compliance officer for Centers.

“What we are asking for today is that this agency [is] allowed to operate under its existing license, which is valid,” Hudson told board members. “If you determine that it’s not valid, then yes, we would require some time to make sure that we get compliant with whatever this new requirement is. But if it’s not valid for us, it’s likely not valid for a number of providers across the state.”

Webb said she wasn’t aware of any other facilities operating psychiatric facilities “in buildings not licensed for that type of treatment,” but the department would be reviewing the issue.

The group’s Elizabeth Mitchell Centers inpatient site in Little Rock is licensed for 49 psychiatric beds and 13 residential beds, according to state documents. The nonprofit touts its treatment of children with severe behavioral and emotional difficulties and those who have suffered trauma, including kids at risk of human trafficking.

Hudson added that regulators have visited the Centers for Youth and Families campus many times since it ended the emergency shelter program in 2017 — which is when she said the nonprofit began using Destiny House as additional residential psychiatric space.

Webb said state regulators met with the staff of Disability Rights Arkansas, a nonprofit federally authorized to monitor the treatment of people with disabilities, in mid-June, and they raised the licensing issue, which the state then investigated.

So the Division of Child Care and Early Childhood Education leadership went to Centers the next day for a meeting. The staff agreed to take the issue to the board, Webb said.

Bill Paschall, communications consultant for Centers, shared with the Arkansas Democrat-Gazette a June 11 citation issued by the state. It’s labeled “Centers - Destiny House,” and notes a handful of missing legal documents in a file reviewed by regulators. Breedlove signed as the licensing specialist.

The licensing standard cited in the document is from the state’s psychiatric residential treatment facility manual, Paschall pointed out.

“It was absolutely no secret,” said Paschall said. “We’ve had PRTF beds [at Destiny House] since 2017.”

In response to the report about the document, Webb reiterated that Centers has been granted a temporary license for Destiny House to address the issue.

“They did not have a PRTF license for Destiny’s House before that and were not in the process of applying for one,” she wrote. “There’s no question there.

“This is just a distraction from some serious safety issues that have happened over the last several months at Centers.”

Hudson also took issue with the seemingly abrupt nature of the warning and short notice to move 11 children, five of whom a Centers spokesman said are wards of the state, out of Destiny House.

“Centers was forced in a position after hours last night — and I will tell you, I was up most of the night with them — trying to figure out if they were going to end up having to discharge 11 children, many of whom had been placed at Centers by DCFS and many of whom had nowhere else to go,” she said.

The board next meets Aug. 26 and will gather more information about the licensing issue in the meantime, members said.