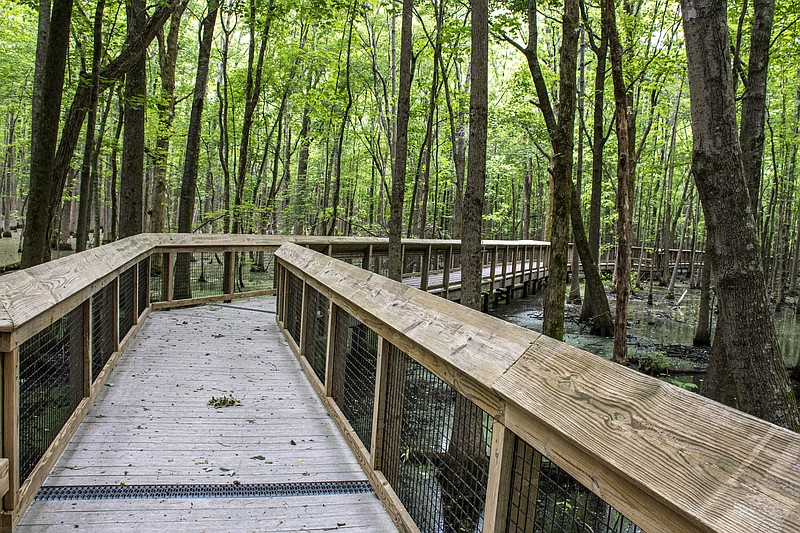 At the end of a two-mile, heavily wooded road in the Delta is one of the last headwater swamps in America and home to a variety of endangered animals, rare swamp cottonwood and the site where surveyors began mapping out the Louisiana Purchase Territory more than 200 years ago.

Louisiana Purchase Historic State Park is at the intersection of Lee, Monroe and Phillips counties — 22 miles south of Brinkley off U.S. 49. "The park protects 37.5 acres of headwater swamp that represent a fast-disappearing ecological setting in eastern Arkansas," according to the Arkansas Department of Parks and Tourism website.

At the park, visitors can view animals and vegetation that are not easily found anywhere else in Arkansas. 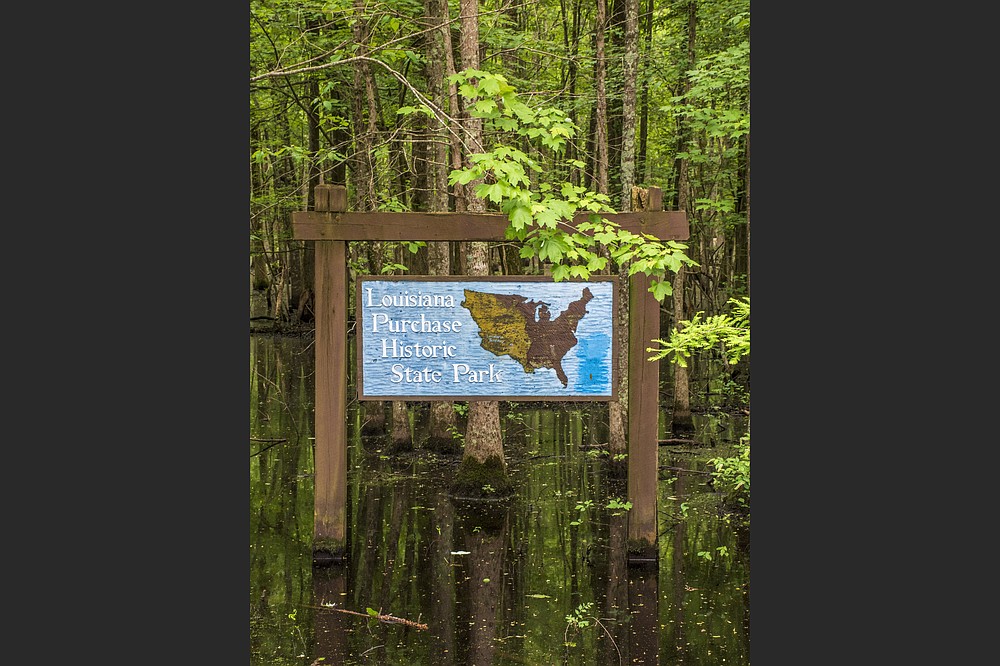 Headwater swamps were once common in eastern Arkansas before they were drained and cleared for farmland and other uses. This type of swamp was formed in ancient glacial outwash channels similar to shallow basins or bowls. In a drought or even in late summer, the swamp can dry out. The Louisiana Purchase swamp is the largest remaining headwater swamp in the entire Mississippi River Valley, according to the Parks and Tourism department.

Gallery: A Glimpse into the Louisiana Purchase Historic State Park

Here's a look at some of the inhabitants an eagle-eyed visitor might see or hear while traversing the park's newly rebuilt 950-foot boardwalk:

◼️ Birds are, of course, everywhere. But is that a bird chirping or the bird-voiced tree frog? The frog takes its name because males make a rapid succession of bird-like whistles. Its survival is a concern because of the clearing and draining of cypress-tupelo swamps. Think you might see one? It is usually a mottled gray, but like many tree frogs, its color may change to brown or green with temperature changes or activity.

◼️ Swamp cottonwood that is rarely found anywhere else in Arkansas. A member of the willow family, this tree can grow up to 100 feet. The trunk bark of a mature tree is light to medium gray and coarsely furrowed. The bark of branches and twigs is gray and more smooth.

◼️ Snakes — The venomous cottonmouth and the non-venomous diamondback water snake. Cottonmouths have large, triangular heads with a dark line through the eye, elliptical pupils and large jowls due to the venom glands. (Stay away!) Diamondback water snakes are predominantly brown, dark brown or dark olive green with a black net-like pattern along the back. While they will not kill you, they are known to be extremely aggressive.

◼️ Bald cypress — This deciduous conifer gets its name because it sheds its needle-like leaves in the early fall. It is best known for its "knees," which are actually roots that give it a unique look.

◼️ Water tupelo — This large aquatic tree has a swollen base, a long, straight trunk, a narrow, open crown of spreading branches, and large, shiny leaves. It can grow to 100 feet. 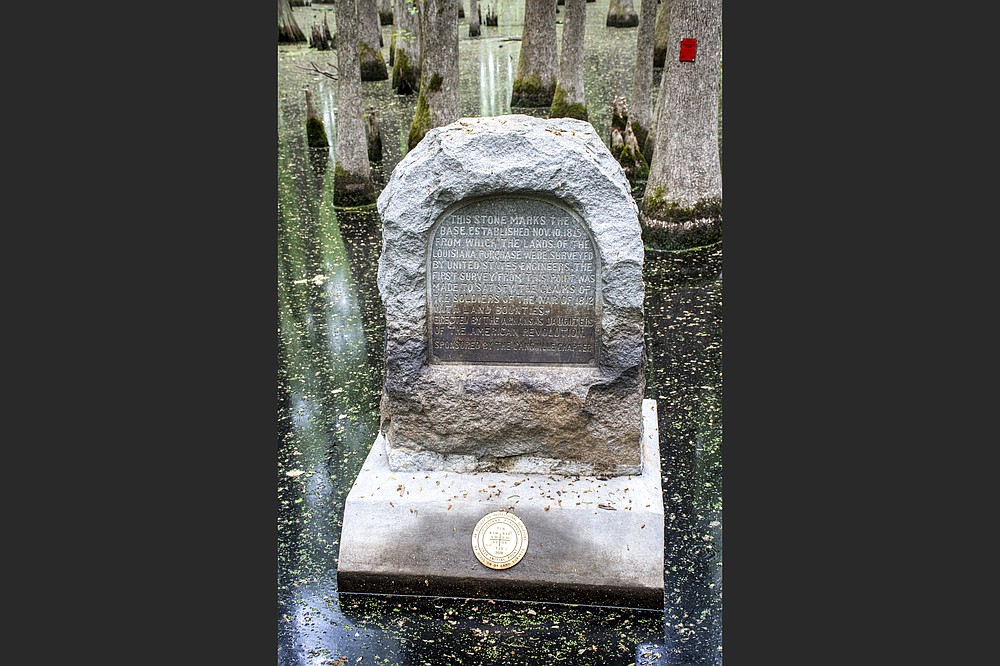 A water line marks how far a granite monument, placed by the L’Anguille Chapter of the Daughters of the American Revolution, had sunk into the swamp at Louisiana Purchase Historic State Park. The monument was raised by the Arkansas Department of Parks and Tourism. (Arkansas Democrat-Gazette/Cary Jenkins)

At the end of the boardwalk is a granite monument that was sinking into the swamp until it was recently raised by the Parks and Tourism department. The monument was installed in 1926 by the L'Anguille Chapter of the Daughters of the American Revolution. Its now visible inscription reads:

"This stone marks the base established Nov. 10, 1815, from which the lands of the Louisiana Purchase were surveyed by United States engineers. The first survey from this point was made to satisfy the claims of soldiers of the War of 1812."

Getting there: To reach the park from Little Rock, take I-40 east to Exit 216 at Brinkley. Then proceed south 21 miles on U.S. 49 to Arkansas 362 and go east two miles to the park at that highway's dead end.