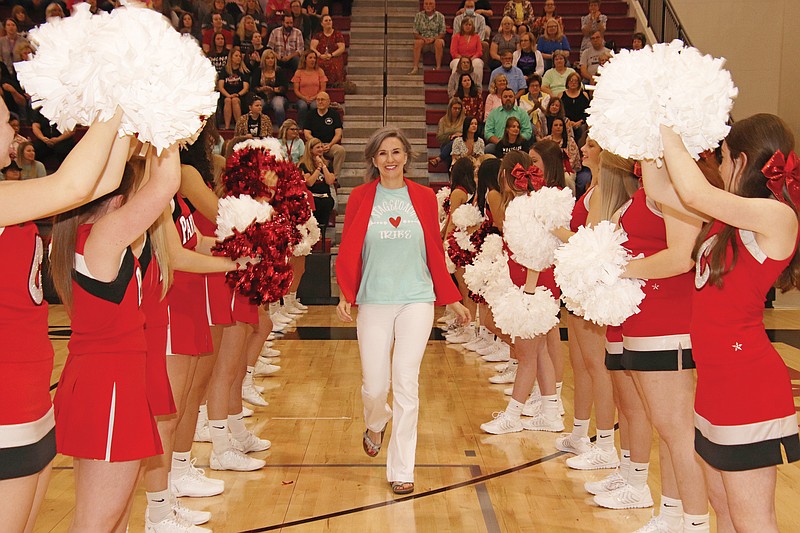 Jessica Saum, a special-education teacher for kindergarten through the fourth grade at Stagecoach Elementary School, was recently named Cabot Public Schools Teacher of the Year.

CABOT — For Lilly Kittinger, a fourth-grader at Stagecoach Elementary School, the only reward she wants for her hard work is the five minutes she gets to sit in her favorite teacher’s chair and pretend to be her.

“That’s Lilly’s reward,” said Christy Kittinger, Lilly’s mom. “Some students work for iPad time, or candy, but she wants to sit in Mrs. Saum’s chair and wear her badge and jacket.

“Lilly works very hard to be in that spot.”

“It was pretty overwhelming,” she said. “This school year presented a whole new set of challenges, but I felt like Cabot did a fantastic job of reopening schools and ensuring we were safe.

“Our schools continued to focus on academic needs and ensuring that social and emotional needs were met. I felt like students had an opportunity to gain some new experiences and to win in such a unique year. I was at a loss for words.”

Christy Kittinger, who teaches special education at Cabot Middle School South, said Saum “probably has one of the most difficult jobs in our district.”

“She has to teach kindergarten through fourth grade, and mastering that schedule and making sure they are all getting their minutes — it is huge,” Kittinger said.

“Lilly loves school and will do anything Mrs. Saum asks of her, just to sit in her chair and wear her name badge,” Kittinger said. “We have been with [Saum] since first grade, and Lilly has flourished. … [Saum] is just amazing. She will fight for whatever her kids need and make sure they have everything they need to be successful.

“There is not a teacher in this district that deserves [the title] more. Nobody’s job is as hard as Jessica’s. She does all five subjects and doesn’t complain about it and makes sure every kid is successful.”

Saum is originally from Columbia, South Carolina, and her husband, Shane, is on active duty in the U.S. Air Force. He has spent almost 11 of his 16 years at the Little Rock Air Force Base. She said the couple originally came to Arkansas in 2007, leaving in 2001, but she and her family have been back since May 2016.

“When I started college, I wasn’t sure what I wanted to do,” she said. I started out as a theater major at the University of South Carolina, but when I went back to college, I met some friends who were teachers or were speech therapists.

“I figured out that special education was a population that I wanted to work with, and I knew I could make a difference in their lives. Special education has been my passion and my heart — it is a really rewarding profession.

“It is where my heart is and where I am meant to be.”

“It is a delight to announce Jessica Saum as our 2020-2021 Cabot Public Schools Teacher of the Year,” Cabot Superintendent Tony Thurman said. “She is compassionate, patient and works with a team of paraprofessionals to provide individualized instruction to ensure each student’s success.”

Carol Skiba, the principal at Stagecoach Elementary School, said Saum is “everything you would want in a teacher as a parent, administrator or student.”

“She is the full package,” said Skiba, who just finished her second year as principal at Stagecoach Elementary. “She is 100 percent professional and is the most selfless person I know.

“She is an incredible, selfless teacher and is highly professional. She contributes a lot to the culture of our building, and she comes up with all these initiatives and ideas to improve teacher morale.

“She is just one of those people that you want to be around.”

Skiba said she has been in education for more than 23 years, and in that time, she said, she has worked with a lot of great educators but has never met anyone who was more deserving of this title.

“Every child needs an advocate. They all need someone on their side,” Saum said. “Special education is a calling. It isn’t a job that you fall into. We have to be that advocate and voice for students, and give them an opportunity to have a voice. … I enjoy doing that in a classroom. I enjoy the challenge of taking someone who may not speak full sentences and initiating conversation.

“We are learning so much more than academics. Our success cannot be measured on paper. I really enjoy giving them that opportunity and power for themselves.”

Saum said that this year, she had 13 special-education students, and she taught everyone in person, except for during some quarantines. She said that before the school year started, Cabot put remote learning plans in place, and as difficult as it was, she said the school had a great plan.

“Students were able to get therapy such as occupational therapy, on top of their academic goals and areas of learning,” Saum said. “I still believe, especially in special education, that students are best served with face-to-face learning.

“There were times we would have to drop off learning materials and send worksheets to students at home, but they would have the same materials that they were used to having in class. We wanted to prepare them as much as we could with what virtual learning looked like.”

Saum said she has three paraprofessionals in her class, Krystal Perkins, Esther Boyd and Stephanie Inderrieden. She said they were instrumental in “our classroom success and supporting my students and me.”

“Our class is better because of them,” Saum said.

“I think she was chosen because she goes above and beyond inside and outside the classroom,” Cullum said. “She is at the kids’ sporting events, dances, anything. It is not just an eight-to-four job for her.

“She has a good relationship with kids’ families so that the kids are successful.”

“She really goes above and beyond,” Kittinger said. “She truly cares about every single kid, even the difficult ones.

“She works hard for every child, and she wants them to be successful. She has high expectations for her children.”