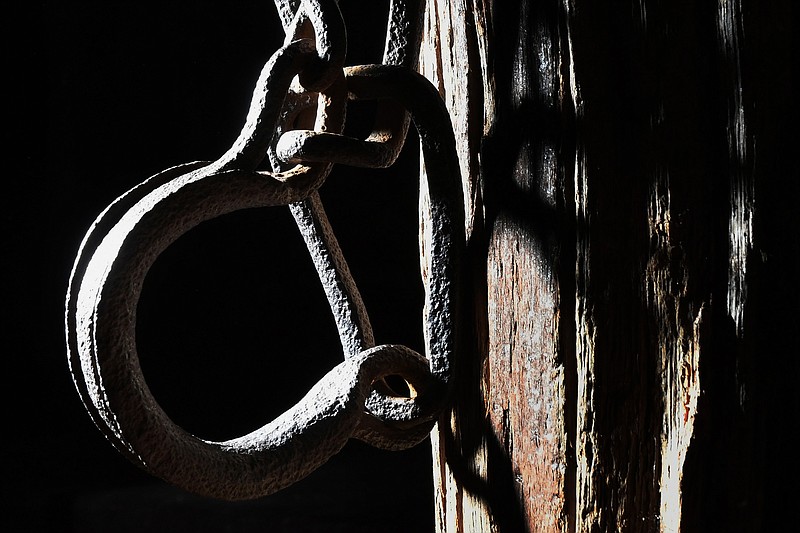 Shackles are on display at the Freedom House Museum in Alexandria, Va. (The Washington Post/Matt McClain)

The Georgetown University graduate went looking for the stains of slavery all over the neighborhood, finding them obscured by the diners and shoppers who throng the waterfront park and main drag of the famous Washington neighborhood.

At the building that once housed the old Georgetown Market and Dean & DeLuca, discolored bricks marked what Crockett thought could be the only vestige of a tunnel that led into the market's basement, where she learned enslaved people awaited auction.

An untold number of them, she said, were trafficked through the old Georgetown port — disembarking after a harrowing journey on the Middle Passage.

"I said, 'I don't want anybody else to not know this information,'" said Crockett, the founder of the Georgetown African American Historic Landmark Project.

Now, as the nation celebrates Juneteenth — the new federal holiday marking the end of slavery in Texas on June 19, 1865 — Eleanor Holmes Norton, delegate to the U.S. House of Representatives (D-D.C.) has introduced a bill to establish a federal memorial on the waterfront commemorating the hundreds of kidnapped Africans believed to have landed at Georgetown in the mid-1700s.

Crockett's organization would help oversee the creation of the memorial — a "powerful marker of truth-telling and remembrance," Norton said. She added that, if approved in Congress, it would still need to go through a federal process to select a design and location.

"I think people forget that the District is as old as the 13 colonies, and that means among other things that slavery was thriving here. It thrived on the Georgetown waterfront," Norton said. "It's known as a glamorous part of the city today, but it's not sufficiently memorialized as a place for the slave trade."

The Georgetown African American Historic Landmark Project is now working with the architect of the African Burial Ground National Monument to study 18th-century ship records that could illuminate a more exact number of enslaved Africans who arrived at the Georgetown port.

The architect, Rodney Leon, said he'll be leading a master's course at Yale University this fall that will investigate at least 11 Middle Passage journeys recorded as docking at "North Potomac," according to Emory University's Trans-Atlantic Slave Trade database.

The goal, Leon said, is to determine which of the ships docked specifically at Georgetown, while framing those details in the broader context of the growth of the slave trade in colonial America.

"If we can identify that in our historic research, that will go, I think, a long way in establishing how this memorial can be manifested and how it can start to tell that story," said Leon, who also designed the United Nations' memorial to the victims of the trans-Atlantic slave trade.

The National Park Service, which oversees the waterfront park and has held informative events about its slavery history with Crockett, is also assisting in the research.

Crockett said she became engrossed in learning Georgetown's Black history after her alma mater revealed that its Jesuit priests sold 272 enslaved laborers in 1838 to save the school financially. She thought about the buildings she sat in through classes years ago, having no inkling of the hundreds of enslaved laborers who could have walked the same grounds.

And she started to see that same story in bustling downtown Georgetown, where shoppers and diners and boaters, she thought, could be overlooking significant Black history hidden in plain sight.

Her research took her almost building by building — to the slave pen on O Street that is now a block of rowhouses, to the historical Mount Zion United Methodist Church, or to the residence of Yarrow Mamout, the Muslim former enslaved worker from Guinea who gained his freedom and became a prominent Georgetown property owner and entrepreneur.

Two years ago, Crockett said, the waterfront earned a "Site of Memory" designation by the United Nations Educational, Scientific and Cultural Organization for historical places associated with the slave trade.

She developed a historic tour around all the key sites, tracing the rich religious and cultural landmarks established by the once-booming Black population in Georgetown. Her organization has placed bronze markers at eight locations, with two more on the way.

But the history of the arriving slave ships at the Georgetown port is perhaps less known. Maurice Jackson, a history professor at Georgetown University, said that "in a way, that's a beautiful thing" — because "everything is up for discovery."

"We do know slave ships came there. We know the names of a couple [of the ships]. But we don't know much more than that," Jackson said. "We know that slaves were dropped off there. And we know that the Georgetown port was a major slave depot."

The port long predated the incorporation of Georgetown in 1751. The port grew into a busy trading hub, mirroring the growth of tobacco exports — and by extension, the slave trade. Before long the port rivaled the Alexandria and Annapolis ports, where enslaved people were traded as well.

Records from Emory University's database show that ships carrying enslaved Africans began disembarking at the "North Potomac" port in 1732, first on a ship called the Liverpool Merchant. More than 1,400 people, mostly from Gambia, would disembark over the next three decades before being sold into slavery.

"We just want to remember their contributions," Crockett said of the effort to establish the federal monument. "We want them to know that we honor what they did. We are here because they survived. And all we want to do is call their name, uncover who they are."