Arkansas one of 17 camps for Kansas QB 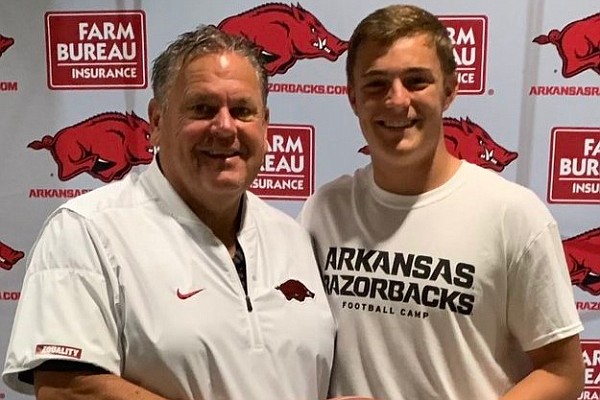 Leise, 6-1, 210 pounds, of Shawnee Mission East High School, has an offer from Kansas and is drawing interest from Arkansas and numerous other programs.

"He just got here six days ago," he said. "Penn Sate has been looking at me pretty hard, but since he came here I’ve been talking to him. I just had a phone call with him last Thursday and I was very excited about that and getting down here and meeting him in person."

Kansas, Kansas State, Wisconsin, Nebraska, Missouri, Georgia, Notre Dame, Iowa State are some of the camps he has attended.

"It’s one of the better campuses I’ve seen," Leise said. "I love all the community around the University of Arkansas."

His father, Daryl, played tight end for coach Tom Osborne at Nebraska from 1987-91. His father and mother, Amy, own a legendary steakhouse in Omaha, The Drover, which has been in operation for more than 50 years.

"Coach Pittman is a great man," he said. "I’m excited about what’s in store for the football program. (Briles) and I seem to have a good relationship, so I’m very excited for the future of that."

While participating in 17 camps in a short period is a once in a lifetime experience, Leise admits it has been taxing.

"It’s a grind, for sure. A lot of late nights, no sleep and get up the next morning," he said. "It’s hard to do, but it’s definitely going to be a memory of mine for a long time.

"(I am) riding around all these campuses and getting to see a bunch of great people and developing relationships at a lot of good places."

Schools are eager to see his early season games in the fall.

"They want to see the first three games," Leise said. "Many coaches like what see in camp and are looking forward to seeing the first 2-3 games this year before they make me offers."