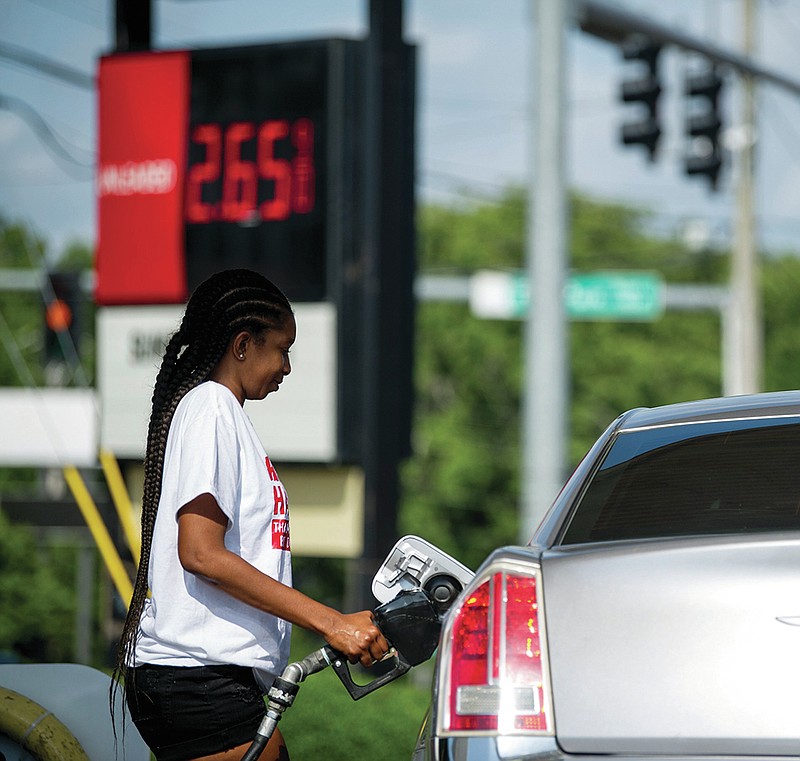 Lakisha Hardy fills up her tank at a gas station on the corner of 12th and Fair Park in Little Rock on Friday, June 25, 2021. (Arkansas Democrat-Gazette/Stephen Swofford)

Automobile travel in Arkansas and surrounding states is expected to break records over the Independence Day holiday, according to a spokesman for the American Automobile Association.

The organization predicts 4.1 million people will travel by automobile in Arkansas, Louisiana, Oklahoma and Texas between Thursday and Sunday.

"It will be the highest on record since we started recording in 2000," AAA spokesman Nick Chabarria said Thursday.

Nationally, travel -- including by automobile, plane and trains -- is expected to be the second-highest recorded on the holiday weekend, with 47.7 million travelers. The record was set in 2019.

Chabarria said fuel costs were about $2.78 per gallon as of Thursday. That is about 92 cents higher than last year, which was lower from the pandemic.

Arkansas is predicted to have the sixth-lowest average gasoline cost in the nation, he said.

"If there is a silver lining for holiday drivers, that would be it," Chabarria said. "A lot of surrounding states also are among the lowest averages in the county."

Spokesman Bill Sadler said Arkansas State Police will participate in the national "Drive Sober or Get Pulled Over" enforcement campaign coordinated by the National Highway Safety Administration. Additional troopers will be on the highways starting Friday afternoon and continuing through Monday evening.

"The troop commanders in each of the 12 state troops will be using their authority to alter schedules so additional troopers will be on the highways," Sadler said.

"We do encourage drivers who might partake of alcohol to use good judgement and reach out to a friend or an alternate form of transportation to drive them home or to run that unexpected errand while they are participating in the festivities," Sadler said.

Troopers also will be watching for impaired driving, Sadler said. This includes drivers paying attention to electronic devices or any number of other circumstances, such as parents distracted by children in the back seat.

"It tells us we will be in an unsettled temperature pattern," he said. "We will probably want to watch this one."

It is possible conditions could come together before or after the holiday, he said.

"If we do end up with stormy weather around the Fourth of July, we would want to practice lightning safety," Cooper said. "If there is lightning, don't shoot fireworks. Let the storms pass."