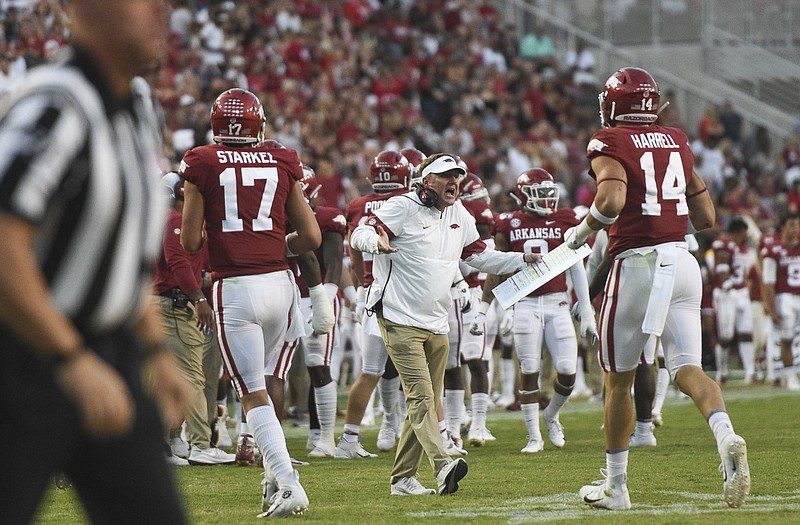 FAYETTEVILLE -- Contributions to the nonprofit foundation supporting Arkansas Razorback athletics declined for the 12-month period that ended June 30 of last year, a time period that included the first months of the pandemic.

Total giving fell to its lowest level since fiscal year 2013 for the Razorback Foundation, and the organization's expenses were greater than revenue.

Gifts to the Razorback Foundation -- either in the form of tax-deductible giving or made to secure tickets -- play a major role in funding University of Arkansas, Fayetteville intercollegiate athletics, including salaries paid to Razorback coaches and some administrators.

The Razorback Foundation finished the fiscal year with contributions and grants totaling about $27.1 million, according to the organization's IRS return filed last month. The total was down about 13% from the previous year's approximately $31.2 million in contributions.

Expenses for the 12-month period that ended June 30 were about $27.5 million, down from the previous year's total of $30.8 million.

The foundation's assets fell to $62.4 million from $62.7 million a year earlier.

[FOUNDATION DONATIONS: Bar chart not showing up above? Click here to see it » arkansasonline.com/628razorback/]

To explain the dip, the foundation referred to "large lead gifts" the previous fiscal year in support of baseball and track-and-field facilities projects, according to a statement released by Meredith Pettigrew, the foundation's director of strategic communications and stewardship.

Before that, the statement noted, the foundation raised funds in support of the $160 million project to expand and renovate Donald W. Reynolds Razorback Stadium. The Razorback Foundation has previously said that more than $44 million was raised to support the stadium project, which was completed in 2018.

The statement from Pettigrew said the foundation "experienced a slight decline in Annual Fund contributions due to the pandemic."

Over the same 12-month time period that overlapped with the first months of the pandemic, UA's athletic department saw operating expenses of about $123.9 million, a total greater than operating revenue of about $123.4 million, according to a financial report submitted to the NCAA.

Full financial information is not yet available on expenses and revenue for the current fiscal year, which ends next week.

Kevin Trainor, a university spokesman, in an email noted the difference between the foundation's annual fund donations and "non-recurring donations" for projects, like facilities construction.

"Looking ahead to [fiscal year] 21 and beyond, we will likely see increases in donations as the Razorback Foundation reports on donations received towards future capital projects and program support," Trainor said.

The U.S. Supreme Court has ruled that the NCAA cannot place a cap on educational benefits provided to college athletes. It's so far unclear what universities may end up providing that isn't available to college athletes already. Some have speculated that laptops and study abroad opportunities might end up being provided.

Asked whether the ruling means UA will need to rely more on fundraising, Trainor called fundraising "vital to being able to provide continued support" for students participating in Razorback athletics.

"The generosity of Razorback fans and the successful fundraising efforts of the Razorback Foundation has put us in a position to continue to increase our investment into the success of our more than 465 student-athletes both on and off the field," Trainor said.

It's unclear how much of the dip in contributions resulted from fewer season tickets being renewed.

Last spring, however, the emergence of the pandemic made it uncertain whether a football season would even be played. The first cases of covid-19 in Arkansas were identified in March 2020.

Covid-19 protocols also limited attendance to about 23% of venue capacity. Box scores for the games posted on the university's website list 16,500 in attendance for each of the five games at a stadium that has a typical capacity of about 72,000.

The Razorback Foundation gave football season ticket holders the option to request a refund if they weren't able to retain their seats because of limited seating or if they had covid-19 health and safety concerns. Otherwise, contributions normally for season tickets were counted as tax-deductible gifts.

The university announced Tuesday that Reynolds Razorback Stadium and other athletic venues will be open in the 2021-22 seasons without restrictions on capacity.

"The pandemic clarified more than ever the fact that college football is what makes the budget work," said Ryan Swanson, an associate professor of history at the University of New Mexico's Honors College who writes frequently about athletics.

But Swanson said that despite the dire predictions about the pandemic cratering athletic department finances, "it wasn't as bad as many people forecasted it to be, generally."

He noted that "the football season happened, for the most part," and also that universities received federal pandemic relief funds to help offset at least some expenses directly related to the pandemic.

As far as the role of nonprofit fundraising organizations like the Razorback Foundation, Swanson said that for college sports programs competing at the highest level, "it's just been this growing trend of foundations having to do more and more."

For the 2019-20 fiscal year, the University of Arkansas, Fayetteville's financial statement noted "increased distributions" of $2.5 million from the Razorback Foundation for salaries.

Trainor said the extra $2.5 million from the foundation had to do with "funding transition costs for football coaches." During the 12-month period covered in the IRS return, UA fired head coach Chad Morris and replaced most of the football coaching staff.

The time period covered by the IRS return also included the June 2020 lawsuit filed by former football head coach Bret Bielema, who claimed buyout payments to him from the Razorback Foundation had been stopped in violation of a buyout agreement.

The Razorback Foundation and Bielema settled out of court in April.

The time period for the foundation's 990 return overlaps with less than the first month of the legal dispute with Bielema, with $69,802 listed in legal expenses for the year.

Pettigrew's statement acknowledged that the foundation "experienced an increase in legal fees due to the dispute with Coach Bret Bielema."

The foundation on its return reported a loss of $148,905 on the sale of land by the entity Cato Springs Road LLC, established by the foundation to handle a gift of approximately 254 acres of land from Dallas Cowboys owner and former UA football co-captain Jerry Jones.

The land is in southwest Fayetteville, west of South Cato Springs Road and near the Interstate 49 intersection.