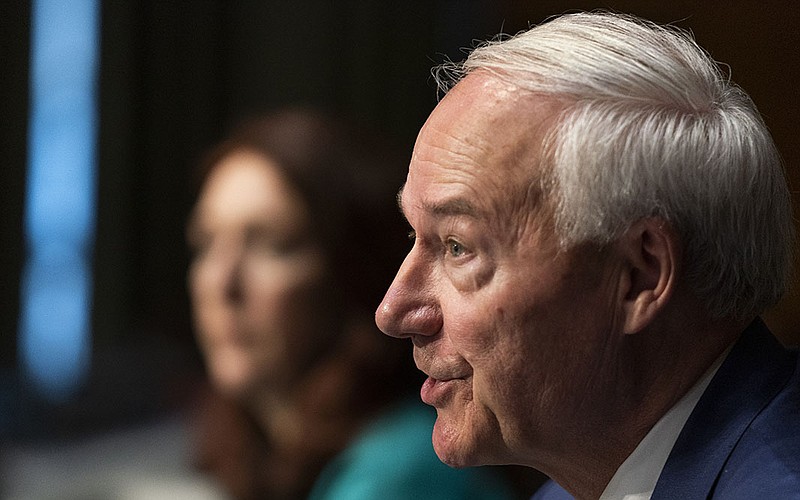 With fiscal 2021 ending today, Gov. Asa Hutchinson said Tuesday that he has authorized the state Department of Finance and Administration to increase the general revenue forecast, which will allow about $86.6 million to flow into the Medicaid trust fund.

The governor authorized the finance department to increase the state forecast by $212.3 million, to $5.89 billion, which allows the state to fully fund its general revenue budget for fiscal 2021, department spokesman Scott Hardin said. The department today will formally deliver a letter from Secretary Larry Walther to the General Assembly to confirm the increase, Hardin said.

The transfer to the state's Medicaid trust fund will increase the balance in that fund to a new high of more than $600 million and will make sure that the state has adequate funds to pay for the health care of low-income Arkansans, Hutchinson said at his weekly news conference in the governor's conference room at the state Capitol.

"Even with that, it will also allow our long-term reserve fund to be $1.22 billion," which was about 20.9% of the budget, the Republican governor said.

Once the revenue forecast is raised and money flows into the Medicaid trust fund, about $101.6 million will remain with state agencies that have the ability to carry funding forward, such as public colleges and universities and the state Department of Education for the public schools, Hardin said.

The remaining $24 million will be reclaimed and transferred to the long-term reserve fund, he said.

In last year's brief fiscal session, the Arkansas General Assembly enacted a general revenue budget of $5.89 billion for fiscal 2021. But the April 2, 2020, forecast only anticipated providing $5.68 billion for that budget, leaving $212.3 million unfunded. That forecast anticipated a pandemic-spawned recession.

The combination of the anticipated recession, federal stimulus payments bolstering consumer spending in fiscal 2021, and a rebounding economy has helped fuel general revenue tax collections during the past several months. The state's two largest sources of general revenue are individual income taxes and sales and use taxes.

The shifting of individual income filing and payment deadlines, putting the ones for 2019 and 2020 in fiscal 2021, bolstered tax collections. Fiscal 2021 started July 1 and ends today.

In 2020, the state shifted the individual income filing and payment deadline from April 15 to July 15. This year, the deadline shifted from April 15 to May 17. Both changes mirrored the federal government's changes and were made because of the covid-19 pandemic.

On April 22, Hutchinson said at a news conference, while flanked by House and Senate leaders, that state officials had expected a general revenue surplus of about $600 million at the end of this fiscal year and expected similarly strong growth in tax collections in fiscal 2022 as a result of federal stimulus money.

At that time, net general revenue exceeded the forecast by more than $500 million.

On that day, state officials also estimated that the long-term reserve fund, then totaling $209.9 million, could increase to $711.1 million.

But the expected surplus and expected amount in the long-term reserve fund have increased significantly since then.

In this year's regular session, the General Assembly enacted a general revenue budget of $5.84 billion for fiscal 2022, which begins Thursday.

Hutchinson said that budget meets the state's obligations and priorities primarily -- and most importantly in education. The fiscal 2022 budget is fully funded under the general revenue forecast.

After returning from an extended recess this fall, the Legislature is expected to redraw the state's four congressional district boundaries based on information from the 2020 U.S. census and adjourn the regular session.