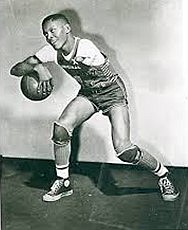 This week, the spotlight shines on Boid Buie, the only one-armed star in professional basketball history, whose athletic prowess was nothing compared to his determination.

This is the final installment in ExplorePineBluff.com's monthlong look at notable people and events with Pine Bluff connections during Black History Month.

Many people overcome great adversity in this world. But to make it as a professional athlete when you are missing a limb? What kind of person does that? Boid Buie did. He became a star professional athlete despite having only one arm. Buie was best known as a professional basketball player for the Harlem Globetrotters and other similar black touring teams. He also had a short career in Negro Baseball, appearing as a pitcher for the Harlem Globetrotters baseball team in 1948. During his heyday, he was considered a marvel of the sports world.

Think about this for a moment. Most people with two arms don't accomplish half as much as Boid Buie did with one.

Buie's story begins in 1922 when he was born in Pine Bluff. He grew up in southeast Arkansas near the towns of Tillar and Portland. A near-fatal car accident cost him his left arm when he was 13. After that, he had to relearn how to balance himself while doing simple tasks, like walking down the street.

It is truly amazing that Buie managed to live a normal life. How he became a sports star is a study in persistence. Never a great athlete before the crash, Buie worked so hard on his goals that he became known as the "One Armed Firecracker." He became a star basketball player at St. Peter's High School and J.C. Corbin High School in Pine Bluff. His team improved every season he played there until his senior season when the team went all the way to the Arkansas State Championship.

After high school, Buie briefly attended Arkansas A&M College before enrolling at Tennessee A&I State College, now Tennessee State University (TSU). He joined the TSU basketball team just like any other freshman in 1943. He practiced with the team every day, became a starter, and eventually became one of the best players on the team. Coaches and fans fawned over Buie's fundamentals, his jump shot, and his ability to win games. He even helped TSU win the Black National Championship in 1946 with a win over Langston. Prior to that game, Langston had not lost a game in three seasons.

Buie traveled the world following World War II and averaged 18 points per game during his Globetrotter's career. After his playing career was over in 1960, Buie bought his own basketball team, the Harlem Stars. The team was similar to the Globetrotters, traveling the world and entertaining fans with captivating performances.

In 1983, Buie was inducted into the Tennessee State University Athletics Hall of Fame. In 2009, the Tennessee House of Representatives honored Buie and other TSU basketball players who went on to play with the Harlem Globetrotters.

This article is among features at ExplorePineBluff.com, a program of the Pine Bluff Advertising and Promotion Commission. Sources: ArkBaseball.com, Newspapers.com, TSUTigers.com.